Although 11-year-old Kaitlyn Linck may not have hired grooms or own a string of expensive ponies, her excellent work ethic and her strong partnership with her mother allow her to conquer anything she tries. Known as KK in the horse show world and currently training at her mother’s Merrifield Farm in Clinton Corners, New York, KK has been in the barn with her mother, Karolina, since she was just a few days old.

KK’s family has always been involved with horses, with both her mother and father teaching and training in the industry. Since day one, KK and her mother have worked together as a strong team, always relying on each other whether at shows or at home. Their teamwork has made them a powerful force in the equestrian world.

Karolina has been riding since age 12, competing later in her life and eventually opening a boarding and training facility. She has always taught KK and continues to do so, although KK occasionally rides with other trainers. “I think it’s really nice to have my mom as my trainer because she can help me any time I need her. There’s not much of a downside to it,” KK said.

KK started riding at 2 and launched her show career at 3 years old. At age 4, she won the prestigious leadline class at Devon with her mother as her leader, riding Betty Boop, a small pony they leased. “She was a beautiful black pony. She’s pretty special. Leadline is her specialty because she’s very pretty and she’s super well-behaved in the ring,” Karolina explained.

KK and Karolina spent months planning for the class, picking out everything from Karolina’s hat to KK’s bows. Even with Betty’s knack and plenty of planning, KK and Karolina were both shocked and overjoyed when they won the class — it was KK’s first big win.

By then, KK was already showing, competing her 4-year-old leased pony, Gingersnap, in walk-trot classes. Although they didn’t originally plan to lease such a young pony, her quiet and kind nature quickly won KK and Karolina over and convinced them to give her a chance. “They just really hit it off great, and that’s how we got her. Basically, they chose each other,” Karolina said.

As KK continued to ride more challenging ponies, she began to have more catch-riding opportunities, and started gaining more experience riding and showing many of the ponies in the family’s training program. This gave KK the tools to ride nearly any pony or horse well, allowed her to ride top-quality ponies that she would not have the chance to own, and has led her to amazing new partnerships.

“We don’t have grooms or help in the barn,” Karolina said. “I’ve been training her mostly by myself. I’m the driver, the groom, the person who is mucking the stalls, and doing everything all the time. She does most of the hard work herself, so the catch riding is nice for us because we just have to show up at the ring.”

Although KK and Karolina love all of their ponies, one that will always have a special place in their lives is Juilliard’s First Encounter, or Winston, a small pony that KK started riding when she was 5 years old. Winston found a special place in her heart as her personal pet and best friend after their amazing success in the show ring, winning nearly every class they entered as they strengthened their bond and worked through challenges.

Even though KK and Winston don’t compete in the show ring together anymore, Winston still goes to horse shows throughout the year and to Florida for the winter circuit with KK. There, he gets to enjoy galloping on the racetracks and jumping schooling jumps at the horse shows. “One of my funniest moments was with Winston,” KK said. “I asked for a lead change and I fell off because I stepped out too hard and forgot I didn’t have stirrups.”

More recently, Karolina introduced KK to a friend who trains and shows jumpers, Marcus Grünthal. KK rode several of his horses at his barn, and had the opportunity to show one of the sales horses in jumper classes. KK found a love for the jumpers, which came as a surprise to her mother. “KK never used to like the speed,” Karolina said. “She never liked ponies or horses going forward, so this was a shock for everybody because the mare she was showing was super forward.”

Karolina purchased Revita Belu, aka Rosi, a 13-year-old imported Oldenberg mare, to be KK’s first jumper.  “She’s super fun,” KK said. “She reminds me of the horse I was catch riding in the jumpers.” Although they were not seriously looking to buy, Rosi impressed KK and Karolina during the trial with her sweet personality.

With her schedule constantly becoming busier, KK recently began a fully online private school, which allows her to have more freedom to ride and show. “She’s a straight-A student,” Karolina said. “A social life is really not her priority and never was. She always chooses horses over any play dates or birthday parties.”

When they aren’t together at a horse show, KK and Karolina enjoy skiing, ice skating and sledding in cold weather. “If I didn’t do riding or go to Florida in the winter, I would definitely be on a ski team,” KK said. When they have down time during the summer, they go to the lake for the day and take their boat out, go to a water park, or explore a new place.

Looking ahead to KK’s Junior years, she hopes to continue showing ponies, while also trying jumpers, equitation and Junior hunters. Most importantly, KK and Karolina are excited to do what they love together each day.

“The most important thing is that we get to spend every day together,” Karolina said. “Life is too short and they grow up way too fast. I am very proud of her. Her hard work is paying off, and it’s not always easy, but she will do anything to make it work.” 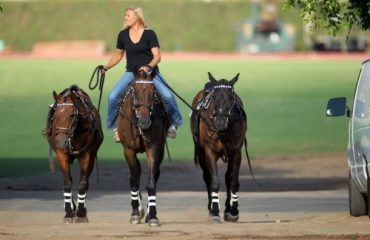 The Art of Being a Polo Groom 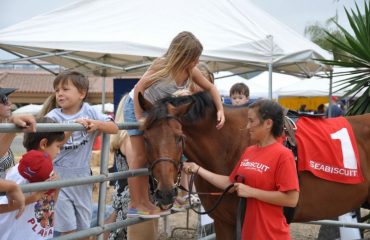 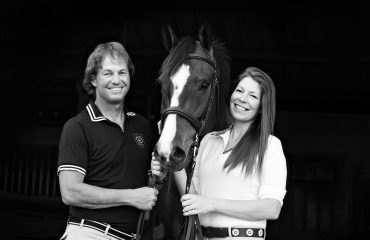