Kelly Wilkinson Coffin thrives off of doing what she loves. From her time as a naval aviator deployed in Operation Desert Storm to taking classes for art and joining her husband, Tad Coffin, in their shared equestrian lifestyle, Kelly brings a vibrant and enthusiastic energy to her projects and passions.

Kelly spent her formative years in Japan and had private lessons with a skilled Japanese artist, getting an early start in her journey into the art world. After her family moved to Arlington, Virginia, Kelly’s foray into the horse world began when she and her best friends started taking riding lessons at the Quantico Marine Corps base. In a prelude of what was to come, Kelly had a retired U.S. Marine major as her first riding instructor, an experience which would serve her well later in flight training with, coincidentally, another U.S. Marine.

Kelly was also fortunate to meet Joan Jones, the master of the Bull Run Hunt in Manassas, Virginia. “Soon I was riding and hunting through some of the most amazing and historic countryside,” Kelly reminisced. “Joan later introduced me to Jack and Donna Eicher, huntsman and whipper-in for the Farmington Hunt in Charlottesville, who made it possible for this city girl to ride and hunt while attending the University of Virginia.”

Kelly was born into a family with a strong tradition of naval service. “My father, grandfather, two brothers, sister and her husband all served as naval officers, so I felt a certain calling and duty,” she said. When Kelly discovered that women could fly in the Navy, she was immediately hooked and pursued it wholeheartedly.

Kelly might be one of the only flight students who managed to continue to foxhunt while training as a pilot. “The generosity of Masters Marty and Daphne Wood of Live Oak Hunt really helped keep me in the saddle and gave me opportunities to ride, and I’m happy to say that I still hunt today.”

Kelly’s time as a naval aviator set the tone for the rest of her life as she spent 10 years in the Navy Reserves while flying 737s for US Airways. “It certainly had its challenging moments,” Kelly explained, “but most of the time I couldn’t believe I was getting paid to do what I was doing. Just being in a tribe of people with whom I shared a love of flying and serving was a joy and the source of incredible lifelong friendships.”

After the events of 9/11, Kelly was furloughed from US Airways and continued to fly in the Naval Reserve while reigniting her passion for painting by enrolling in the Ingbretson Studio. Her love of painting since childhood led her to seek out more training, and she attended night classes at a local community college as well as at the Torpedo Factory Art School in Alexandria, Virginia, when she was an airline pilot.

“It was a good exercise to bounce back and forth between flying in the Navy and jumping back into a 19th century curriculum,” Kelly said. “The two atmospheres couldn’t have been more different and caused me to fully engage both right and left brain simultaneously.”

Galloping in a New Direction

As Kelly continued to develop her painting and art skills, she attended the Ingbretson Studio of Drawing and Painting for three years in New Hampshire. The studio was invaluable to Kelly in laying the foundations of her art career. “Paul Ingbretson is an extraordinary painter and instructor whose studio and curriculum is modeled on the ateliers of 19th century Europe, where schools developed around exceptional painters, working from life and live models,” Kelly explained.

In 2004, Kelly decided it was time to strike out on her own and start an art studio in Charlottesville, returning to her home state. While building her business was an exciting time for her, Kelly was grateful to reconnect with her family, especially when she was making the leap from pilot to painter. A few years later, after establishing herself as a skilled portrait, landscape and equine artist, Kelly met her future husband: double-Olympic gold medalist eventer Tad Coffin.

“A friend whom we both knew gave Tad an article that was about my work,” Kelly said. “After reading it, he sent me a wonderful letter and we got to know each other through our mutual love of horses.” Married two years later, Kelly is constantly inspired by Tad’s work with horses, whether with training or his multifaceted work with his own unique saddle-making process and business, Tad Coffin Performance Saddles.

“I am lucky enough to ride every day here on our farm with my husband as well as hunt now and again,” Kelly shared with a smile. “We share a passion for riding and a mission to celebrate the relationship between horse and rider, through my paintings and his journey into saddle making. Horses simply want to partner with us, and I never tire of contemplating or celebrating that through painting. My husband is a great inspiration to me in this respect, and a wonderful model as well.”

Kelly’s work has been celebrated as the official poster for the 44th edition of the Hampton Classic Horse Show as well as the Washington International Horse Show Regional Championship, and is in many public and private art collections in the U.S., Europe and Greece. “Currently I’m working on a series of paintings of Thoroughbreds to aid Bluebloods Thoroughbred Rescue, as well as several private commissions,” Kelly said. “In the near future, I hope to undertake a large equestrian painting of Thomas Jefferson, for which I’ve already completed the studies.” 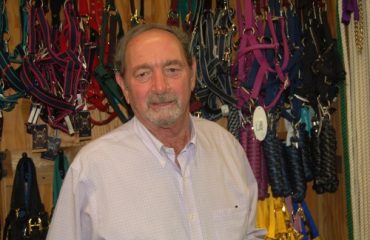 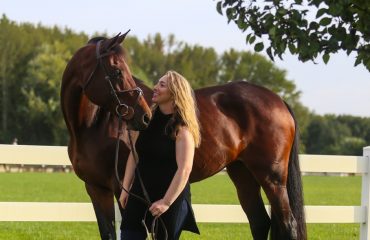 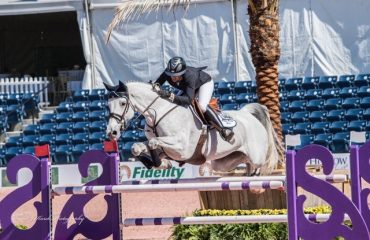 Kelly Soleau-Millar: Part of the First Family of Show Jumping