Madison “Maddie” Rauschenbach learned at an early age that when an opportunity presents itself, you have to jump on it — literally. At 18 years old, Maddie’s willingness to jump on any horse offered to her has propelled her to be a winner in the jumper, equitation and hunter rings.

During the past two years, Maddie has donned the red, white and blue for Team USA, won an equitation final and participated in the 2021 USEF Horsemastership Training Series. Though this may be her last Junior year, Maddie is just getting started on achieving all her equestrian dreams.

It was a forgone conclusion that horses would be a big part of Maddie’s life even before she was born into an equestrian family. In fact, Maddie’s mom, Monica, and her “uncle” Brad Whitmire purchased a miniature horse, Billy The Kid, for her prior to her birth. Billy lived at the family’s Sly Fox Farm in Walden, New York, until Maddie was ready to ride.

While Monica got Maddie an early start in the show ring, doing Leadline at 16 months old, Maddie decided the sport wasn’t for her at age 2. “I didn’t want to ride. My mom even tried to buy me a pony when I was 3, but I told her I didn’t want a pony,” Maddie said. “I asked if I could get a pony when I was 6 and that’s exactly what happened. I turned 6, asked for a pony and started riding.”

After an early hiatus from riding during her toddler to kindergarten years, once Maddie jumped all in to ponies at age 6, she never looked back. Maddie credits Brad for teaching her everything she knows about riding.

“My Uncle Brad gave me the most amazing foundation for everything I do. I was so lucky to be able to ride with him every day. He always pushed me to be better and let me do things other people wouldn’t have,” Maddie said. “I did Mini Stirrup, Short Stirrup and Pre-Children’s all in one year, and started doing Children’s ponies at 7.”

Brad didn’t just teach Maddie the basics when she started, he threw everything but the kitchen sink at her. “I had my pony lateral steering and doing haunches-in and shoulder-in when I was 6. I learned how to find my spot at the jump by Brad setting bounce poles for me. I’m forever grateful he gave me that foundation at such a young age,” Maddie said.

From bouncing at 6, Maddie was on a fast track to make her way to the jumper ring. But first she had to get Brad’s buy-in. “When I was 8, my mom, Uncle Brad and I were at Devon watching the Pony Jumpers and I told them I wanted to do that. Brad told me I couldn’t do the jumpers until I was 12, but he gave in when I was 10.”

“She was so hot and fast it was hard to do the hunters on her. So, I begged to do the jumpers,” Maddie said. “Once we made the switch to the jumpers, she won almost every class we went in. She was the best!”

That first foray into the jumpers left a lasting impression on Maddie. Although she would go on to have success in the hunter ring on both ponies and horses, Maddie knew her heart was in the ring with the striped jumps and timers.

“There’s just something amazing about jumping big jumps and going fast. You have to be so technical, create a plan while you walk the course and then stick to the plan when you’re on course,” Maddie said. “I have so much fun each time I walk into the jumper ring.”

Maddie has been responsible for the care of her ponies and horses since she asked for her first pony at 6 — a rarity for her generation. “If I wanted to ride, I had to tack it up and untack it myself,” she said. “Of course my mom helped me out, but we never had grooms; it was up to us to handle horse care at home and at the shows.”

She learned early on that horses don’t care about holidays or inclement weather. “Having our own farm, we were always there. It didn’t matter if it was Christmas or a blizzard, the horses still had to eat and be taken care of,” Maddie said.

Although sometimes it can be a lot to juggle, with riding horses in multiple classes and rings on a given day, Maddie wouldn’t have it any other way. “It can get hectic at times when I have a lot to ride, but I love being hands-on with my horses. Some people may think it’s rough that I don’t have a full-time groom, but I enjoy being my own groom,” Maddie said. “With help from my mom and friends, we can do it all when it comes to grooming.”

Maddie has always owned her ponies and horses. A proficient pony rider, she had numerous opportunities to catch ride ponies at shows by her home in New York. As Maddie has grown up and developed her riding skills, the catch rides have expanded from ponies to Junior hunters and jumpers.

When it comes to accepting a catch ride, Maddie is a yes-woman. “I will ride whatever anyone offers me to ride. I learned there is no such thing as a bad opportunity,” Maddie said. “If you listen, you can learn something from everybody you ride for. Even if that means learning what not to do.”

In June 2020, Maddie got an offer to catch ride a familiar horse that would open the door to new experiences and success. Earlier in the year, Maddie sold Iwan, a Dutch Warmblood gelding she had imported, to trainer Don Stewart.

“Don watched me ride when I sold Iwan to him, and asked me if I did the equitation. I told him, ‘No I never focused on it because I wanted to spend the money we have in the jumper ring,’” Maddie said. Fast forward a few months and Don called Maddie offering her the ride on Iwan at the Tryon summer shows.

“It was a fabulous opportunity, but a bit odd to show one I had owned. I had purposely tried not to get attached to him or any other sales horse, because it makes it that much harder to sell them,” Maddie said.

Although she was initially hesitant, Maddie quickly warmed up to the chance to work with Don and reunite with Iwan. It was during the summer of 2020 that Maddie competed in her first Big Eq classes and associated finals, and attended Junior Hunter Finals for the first time.

With Don and Iwan, Maddie had one of her most memorable wins to date, in the Palm Beach International Academy (PBIA) North American Junior Equitation Championship at the 2020 Capital Challenge Horse Show — her first time in the ring at a Big Eq final.

“It was so special because not only had I picked Iwan out myself from Europe, but together we both won our first Big Eq final. I never thought I was good enough at equitation to be successful at that level, but when I received scores in the 90s during my second round, I realized I can do this,” Maddie said. “That day really boosted my confidence in the equitation ring.”

While Maddie is excelling in the hunter and equitation rings, she’s also a rising star for U.S. show jumping. During her youth career, Maddie’s had the opportunity to participate on multiple Junior Nations Cup teams.

Most notably, Maddie traveled to Tianjin, China, to represent the U.S. in the FEI Jumping Junior Nations Cup in 2018. “It was such a cool experience. There were three of us on the U.S. team. We didn’t know each other before we got to China, but we quickly bonded and worked well as a team,” Maddie said.

Maddie’s first international experience whet her appetite to try to represent the U.S. again in the future.

In January 2021, Maddie was invited to participate in the USEF Horsemastership Training Series. The series is designed to identify and develop the next generation of top U.S. Equestrian Team talent through four days of mounted and unmounted instruction from industry experts and top-level riders.

“I was so excited to be selected for the Horsemastership training series. Anne Kursinski, Beezie Madden and McLain Ward were so nice to take their time to teach us. They not only taught us what to do in the show ring, they also gave us exercises we could take home to work on,” she said.

Maddie is hoping her partnerships with her two mounts, Gilette B and Ictus d’emma, under the tutelage of Teddy Demetriou, will continue to help her rise in the show jumping ranks.

A spicy chestnut mare, Gilette B is Maddie’s heart horse. “She was so spooky when I got her I nicknamed her ‘Listen Linda.’ Once I figured her out, she’s been nothing short of amazing. I’ve jumped some of my biggest classes on her and she’s won a lot for me,” Maddie said.

Ictus D’Emma is Maddie’s newest partner who will be her U25 horse. “I was his biggest fan before we bought him. When Teddy suggested we try him, I thought, There is no way we can get him, we can just get a young horse and develop it,” she said.

Much to Maddie’s shock, her parents surprised her with Ictus a few months ago. Unlike most of Maddie’s mounts whom she’s had to develop, Ictus is no stranger to jumping the bigger Nations Cup courses. “It’s so nice to have one that’s already jumped big tracks and knows what he’s doing,” Maddie said.

While Maddie starts developing a bond with Ictus, she’s plotting her future. In the near term, she’s hoping to be competitive in everything she does, whether it’s medal finals or starting out in small Grand Prix. Eyes always on the prize, Maddie hopes to be chosen to represent the U.S. on other Nations Cup teams and compete at the 5* level in coming years.

“Teddy always teases me I have an entourage, as my mom and grandparents are often ringside watching and my dad’s always supporting me,” Maddie said. “I’m so lucky I have great people working so hard behind the scenes to help me reach my goals.”

Maddie is wearing clothing from Fab Finds by Sarah, fabfindsbysarah.com 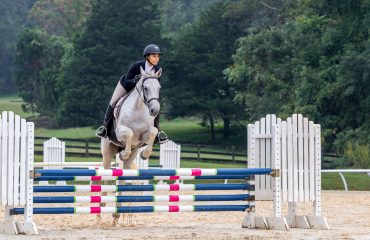 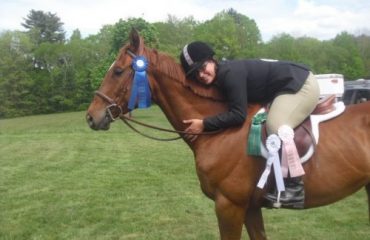 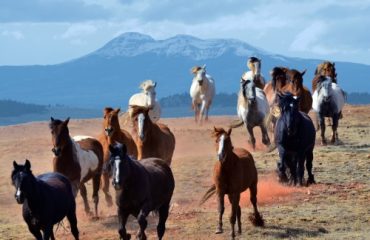 No Fancy Camera. No Past Experience. No Problem.