I met my friend, Tab Hunter, about 40 years ago at Cedar Lodge Farm in Stamford, Connecticut, where my husband Victor Hugo-Vidal and I had our show barn. Tab’s warm, friendly personality, endless energy and handsome good looks were irresistible and we immediately became friends and have remained as such ever since.

He visited us several times in Stamford and often rode many horses. I remember him being a very good rider. He taught me things back then that I still find helpful. A few years later in Dallas, Texas we were both trying horses at a show. I recognized his unmistakable voice (similar to George Morris’) before I actually saw him. I ran into him again a couple of years ago at a show in Del Mar, when he came down from his home in Santa Barbara to watch the grand prix.

Tab Hunter, born in New York City, moved to California as a young child with his mother and has remained out here other than briefly living in the south of France. He has enjoyed a successful movie career, starring in over 40 movies from 1950 to 1996, co-starring with famous actresses such as Natalie Wood, Sophia Loren and Debbie Reynolds. He was honored with a star on the Hollywood Walk of Fame.

Recently I caught up with Tab in Santa Barbara and asked him a few questions for my column, starting with the most obvious one regarding his name. It turns out that his real name, Arthur Gelien (which was his mother’s maiden name) didn’t appeal to his agent who said, “We need to tab you something.” Another person in the room said, “Well he rides hunters and jumpers, what about Hunter?” Hunter, being the better choice than jumper, he then became Tab Hunter. At first Tab didn’t like his new name; but his agent insisted that when he saw it on his first paycheck, his opinion would change! He was right!

Tab at a signing for his book “Tab Hunter Confidential: The Making Of A Movie Star.”

Tab became involved with horses because his brother, whom he greatly admired, rode. At the age of 11 he participated in group lessons every Saturday at a stable called Dubrouck’s Riding Academy (near Griffith Park). To earn more riding time, he became a stable boy. He did a lot of riding and showing during his time at Dubrouck’s. He enjoyed going to watch top riders at shows, such as Barbara Worth, Clyde Kennedy and Otto Russo to name a few of the all-time greats in those days. Eventually, Tab trained with Clyde Kennedy and Jimmy Williams. He rode hunters and jumpers, but preferred the excitement of the jumpers.

Tab, with the help of Arthur Hawkins, Danny Lenehan and Victor, got his judges license and enjoyed judging throughout the country. Tab went back to New York to The Garden (Madison Square Garden) to watch the horse show and was introduced to George Morris who was just out of juniors and riding on the (USET) team. At that time, Tab didn’t know anyone and George agreed to introduce him to people and they became lifelong friends. It was then that George introduced Tab to Victor.

Tab decided to board a horse at Cedar Lodge Farm. “Even though I was an actor; I was always more comfortable around horses than in the movie industry!”  Tab said, calling his involvement with horses a “touch of reality!”

Tab rode every chance he got. When he was filming in different countries he managed to get away and ride, whether it was foxhunting in England or hacking in Spain. Through George, he met Francisco “Paco” Goyoaga, one of the finest riders of the 50’s who represented Spain in three Olympics. “If you’re a horse lover, you’ve always got friends!”

Standing on the ground in Santa Barbara in 1956 is Mousie Brinkman, before she became Jimmy William’s wife. Mousie is holding Battlin Bim and Tab is holding Swizzlestick, the mare Tab rode in three films.

When asked whom he most admired in the horse world, he said, “There are so many, different ones for different reasons! I watched and admired Rodney Jenkins, Barney Ward and Diane Grod when they showed in California. I admired George Morris, Bobby Burke and Cappy Smith! How could you not admire people like that? How could you not admire Humberto Marilas? I watched the Mexican team when they came out here and competed at The Forum in Los Angeles. Then the magnificent hunter riders from out east like Linda Hough and Gene Cunningham and Bobby Burke! Susie (Hutchison) and Hap (Hansen) were just juniors in those days!”

In the ‘60s, Tab realized the importance of acquiring a good dressage base. Bert de Nemethy, legendary coach of the USET jumping squad for 25 years, was “a genius”! Tab watched Bert work with George Morris, Frank Chapot  Bill Steinkraus and Mary Chapot in New York at the Uttermeyer estate prior to the headquarters in Gladstone, New Jersey. Mary Chapot, from California, was “one of the most brilliant riders I had ever seen!” Tab remarked.

Tab pointed out that years ago many of the great hunter and jumper riders in California began as Western riders, such as Barbara Worth, Clyde Kennedy, Otto Russo, Jimmy Williams and Don Dodge. The riders in those days were very versatile. “A good rider is a good rider!”

When asked about his most memorable moments with horses, again Tab said “Different ones for different reasons.” On his 80th birthday his partner, Allan, surprised him not only with a party with a lot of horse people but by bringing back the mare he had bred and previously donated to the all-girls school in Chatham Hall, Virginia. Not only was the party a surprise but turning around and seeing his mare “Harlow” standing there was overwhelming! “I totally lost it!” Tab said. He rides her daily and takes great care of her.

Tab rode horses in several films; the first was “The Burning Hills” with Natalie Wood, “They Came to Cordura” with Gary Cooper and Rita Hayward as well as in “Gunman’s Walk” with Van Heflin. The mare he used was too hot for the show ring but loved being in the movies! “She was cut out for the movies; she thought she was Marilyn Monroe!” Tab laughingly said.

Diane Grod, mounted, with Tab in the background. In front is George Morris, Tiffany Traurig (Bernie’s wife at that time) and J.J. Smith.

Currently, Tab spends his days walking his dogs (Whippets) on the beach and then going to the barn and either riding his mare on the trail or doing flatwork and gymnastics in the ring! Tab loves this and said he is the happiest when he can ride and be around horses and would have chosen to be a professional had he not thought he’d make a better living acting.

I was so inspired by Tab’s never ending enthusiasm for life, his love of people and animals and the fact that at age 81, he not only rides, but jumps! Well, too, I might add! As the writer of the West Side Story column for Sidelines, there is one tidbit I want to point out: Tab had the leading role as Tony in the stage production of West Side Story (in Meadowbrook, New Jersey.) He was in numerous stage productions, but I singled this one out for obvious reasons!

Tab jumping a 6′ puissance wall at The Forum on The Coach.

Tab on Harlow, his current Dutch Warmblood Pinto mare. At age 81, Tab not only rides, but jumps!

Tab on Lonesome Road, a 17 hand Buckskin Quarter Horse, in Sacramento, California on the cross-country course.

Tab in his early movie days.

Holly Hugo-Vidal is Sidelines’ California correspondent and writes the “West Side Story” column. Holly is located in Rancho Santa Fe, California. Holly specializes in hunters and equitation as well as adults.  She is an “R” USEF judge, clinician and an author. Her most recent book is “Build Confidence Over Fences.” 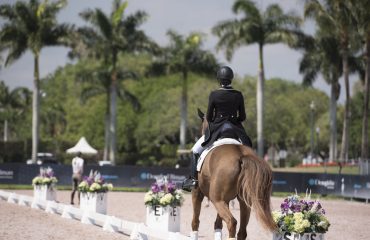 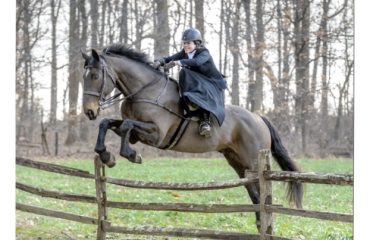 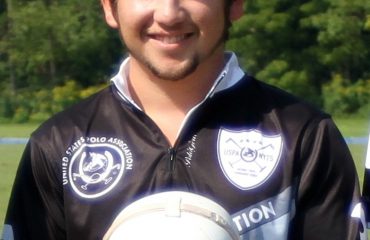