Therapy comes in many different forms at AFEC. Located in Elizabeth, Pennsylvania, just outside of Pittsburgh, AFEC offers everything from basic lessons to groundwork-assisted emotional and physical therapy. All the while, AFEC creates a sense of community and purpose for all who participate.

“It’s really just based on what the individual needs and wants, and sometimes it’s not clear,” said Kayla Lopez, chairman of the board. “They know there’s something extra needed, but maybe they’re not comfortable asking for it or don’t even know what they need. Maybe they just want to say, ‘Hey, I’m here to enjoy the animals.’ We can work with their needs to help with whatever challenges they’re having.”

It’s a life-changing idea, and it came from Kayla’s then-7-year-old daughter.

The Power of Horses

Kayla was introduced to horses through her Navy veteran uncle. He had horses — at his water park in Puerto Rico. “We thought he was insane — who opens a water park on an island?” Kayla laughed. “But he had horses there, so I would spend every summer with my mean old Navy uncle. He was fabulous — he wasn’t mean at all, but that’s what everybody thought.”

Kayla spent her summers mucking stalls and caring for the horses, and a passion began to grow from there. In high school and college she gave up riding, but not for long. “Then I had my daughter, Anabell, and she came out neighing,” Kayla said. “I said, ‘Alright, I guess we’re getting another horse!’”

Having grown up in a military family and in her full-time job helping companies in corporate America develop military and veteran programs, Kayla was familiar with some of the challenges that service members and their families face. She also saw similarities to her daughter’s situation. “Her dad is not around at all, and it’s kind of like having that one parent who’s always on deployment or always on orders and just never there,” Kayla shared. “Horses really, really changed Anabell. They built up her confidence and gave her responsibility. It’s a different kind of love, and it really opened her up.”

Soon, Anabell and Kayla had three horses. They shared not only their equine journey, but the joy of serving others. Each year, Anabell joins Kayla volunteering for various events. In 2016, Kayla was on the board for the Mutt Strutt, a large event raising money for service dogs. Anabell was 7 years old, and she was helping Kayla with the charity auction when she turned to her mom and said, “Wouldn’t it be cool if we could do something like this with the horses?”

“I said, ‘Honey, I don’t know how many people would want us to give them a horse,’” Kayla laughed. But that wasn’t what Anabell had in mind. “We had three horses and a friend had two, so we said, ‘You know what? We do have a little herd and we could — we should! — share it.’”

An Idea Brought to Life

The planning for the Armed Forces Equestrian Center took two years, including going through the Professional Association of Therapeutic Horsemanship (PATH) International program. But in December 2018, they became an official 501(c)(3) charity. And Anabell, now 10, is still involved 100%.

“She helps out with lessons, she’s our chief safety walker — she teaches all the volunteers about walking the horses and being an assist during lessons,” Kayla said. “She even helps out with some of the activities.”

Anabell formed a unique bond with one participant, an 82-year-old military spouse whose WWII veteran husband recently passed. “She fell afterwards and wasn’t in a good place health-wise,” Kayla said. “We started doing some physical therapy work with her in addition to just trying to create that sense of community again and helping her through the grieving process.”

One of the physical therapy exercises involves tossing a ball back and forth to a person on the ground while riding at a smooth trot, to help with balance. Anabell is usually the one tossing, catching and picking up the ball. “She’s totally involved, super active and she loves it,” Kayla said.

Some of the “therapies” at AFEC include simply being part of something. Billy is a veteran who served six active tours in Falluja and copes with a traumatic brain injury and post-traumatic stress disorder. He’s done groundwork and been on trail rides — he loves the horses, but he finds even greater enjoyment in giving back. One morning, Kayla arrived to find Billy hammering something in a stall. When she asked what he was doing, he simply replied, “It needed to be fixed, so I fixed it.”

“The barn has given him something I think is hard to wrap your head around or explain,” Kayla said. “He comes in and enjoys the animals, and enjoys having a purpose. He wants to help. It gives him that sense of accomplishment and pride in his work because he’s doing it for an animal he loves, and because he gets to give back to those who are also enjoying the animals and sharing in the community.”

Kayla and Anabell now own eight horses at AFEC, and there are another three available from the barn. Some of those are minis — minis used to spread awareness of both equine therapy and the program, such as in visits to Duquesne University, V.A. events, nursing homes, charity events and more.

Though AFEC wouldn’t be able to function without its strong group of volunteers and supporters, Kayla continues to provide most of the day-to-day financial backing herself — as a single mom with a full-time job. “It is worth it, every, every, every ounce of it,” Kayla said passionately. “But in order for us to grow, we need some help.”

The center is currently in need of an adaptive mounting ramp to accommodate participants with physical disabilities, a new truck and trailer, and a round pen. Donations can be made on their website, or by purchasing from their online store. In the meantime, Kayla and the AFEC community are staying focused on finding and filling needs.

“I think that’s what it’s about,” Kayla said. “It’s hard to say that our program does one specific thing, other than try to bring the community together and improve lives. To put us in a box, to say we only do equine-assisted therapy — no, that’s not all we do, because if someone wants to compete and ride, guess what? There’s a show five minutes down the road. It’s not an A-rated show, but it’ll be fun!”

Kayla and Anabell have already proven they know how to think outside the box — and that no box can contain their efforts to improve the lives of those around them. “It’s all about bringing the community together, putting smiles on faces and helping to overcome barriers,” Kayla concluded, “no matter what it takes.” 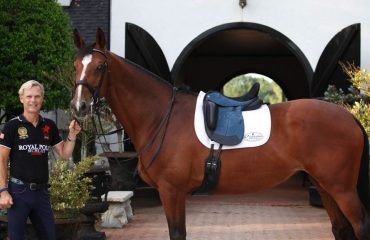 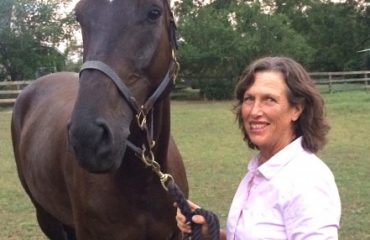 Eventer Beth Perkins Still Has That “Get Up & Go” 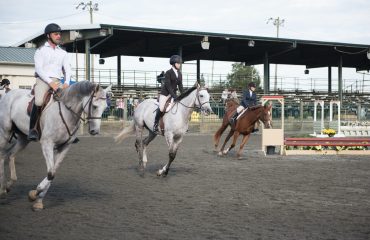