Sidelines Writer Across the Pond

William Speed Lane Fox-Pitt. An appropriate name, and the full version is not often used. He is more commonly known merely as William Fox-Pitt and dominates the world stage in the sport of Three-Day Eventing. Not only does his quite formidable height of 6-feet-6-inches make him stand out in a crowd but his competition record does even more so. He is distinctive in every way.

I spent some time with him a few years ago at the rider’s party on the Saturday night after a drenched Luhmuhlen cross-country day. The thing that struck me about him most was his eyes. Very kind, smiley, quite mesmerising, but behind them lay a challenge and an astute, shrewd commercial mind.

A friend of mine recalled that William breaks things down in a very simplified way, and delegates to make things operate smoothly. Perhaps it is this clarity and ability to allow responsibility in others that ensures his yard works so smoothly and consistently turns out CCI**** horses so regularly in an established pattern. William is also very much sought after as a trainer and has helped many celebrities including Madonna, who was reported to be very serious, hard-working and focused on learning as much as she could. His reputation and his results mean that he enjoys the support and patronage of some outstanding owners, including Catherine Witt who owns Seacookie.

William is happily married the second time around to the Channel 4 TV Racing presenter Alice Plunkett, whom he met in Pony Club. It was Lucinda Green MBE, however, who insisted that they were the perfect match with the words “She is the one for you William.” His first wife ‘Wiggy’ has also found happiness with fellow event rider Andrew Nicholson which has naturally increased the competitiveness between the two to a fierce level. All of which is documented in William’s autobiography What Will Be.

Born in 1969 to inherently horse minded parents, William rode from a young age and started eventing at the age of 15. Encouraged by his parents (both of whom rode at the CCI **** level) his talent flourished and he represented Britain throughout his teens working his way up through the ranks, winning individual silver at the Junior Europeans in 1987, Young Rider team gold medals at the European Championships in 1988 and 1989 and completing Badminton at the tender age of 20. His consistent performances and reliability under pressure established him as a regular on the senior British Team and a Burghley win secured him a coveted place on the Team GBR Squad for the Atlanta Olympics in 1996.

William’s competition record is impressive, and his retirement is some way off.  As he says when asked to summarise his career thus far, it’s, “Not over yet!” He credits his wife Alice with being a vital part of what he does. She understands the sport and the pressures that come with it.

William was the first British rider to become Eventing’s World No. 1, first in 2002 and again in 2009 and 2010. He has ridden for Team GBR for the past 15 years, winning team silver at the 2012 London Olympics, the 2004 Athens Olympics and team bronze at the 2008 Beijing Olympics. Team gold and individual silver at the 2010 World Equestrian Games (WEG) in Kentucky, team silver at the 2006 WEG in Aachen and team bronze at the 2002 WEG in Jerez. He has won seven European Team golds at the European Championships and has been the British No. 1 eleven times.

In 2013, William’s aims are Rolex, Badminton, Burghley and the European Championships in Malmo, with Rolex being the first port of call. Choosing which horses to run where can be a difficult task, especially when two of the major ****CCI’s (Rolex and Badminton) are so close together in the calendar.  Making the decision is never easy, but so far he has been lucky and things have worked out for the best. Certainly his owners love to come to Kentucky as it is such an enjoyable, hospitable event.

The winning duo, William Fox-Pitt and Parklane Hawk, take their victory gallop at Rolex in 2012.
Photo by Lauren R. Giannini

Describing Rolex, William says, “It is always a real privilege to be able to bring horses to Kentucky. The horse park is a spectacular venue and the atmosphere is incredible. Overseas riders are always made to feel very welcome and I have had a lot of good luck and good rides around the course. It is a cross-country track that I really enjoy riding. It is still hard to know which horses I am bringing at this stage but I have entries for Seacookie, Neuf Des Coeurs, Chilli Morning and Cool Mountain. It is also a great opportunity to catch up with all my fellow USA competitors. I am looking forward to catching up with Sinead Halpin who spent a year training with us in England although this year I hear she sadly won’t be riding.”

William, Alice and their three children, Oliver (7 years), Thomas (6 years) and Chloe (6 months), live in the village of Hinton St Mary in Dorset with three lurchers (dogs), a cat, a lizard, a rabbit, two pigs and a menagerie of rare breed chickens. There is also a small 11-hand pony waiting in the wings that the children enjoy riding from time to time, but so far they are showing very little interest in the sport. Alice and William are allowing them to decide for themselves. As they said, “We are only keen for them to at least learn how to ride as it is a great thing for them to be able to do.”

With so many family-riding dynasties in the UK it will be interesting to watch out for their names in the future!

About the writer: Maria Wynne has spent her entire life with horses and her family background is steeped in them. She is a proud (single) Mum of the an adorable 5 year old son named Theodore Denman, who is named after the 2008 Cheltenham Gold Cup Winner.

William Fox-Pitt and Parklane Hawk jog for the ground jury during the first vet inspection at the 2012 Rolex Three-Day Event.
Photo by Lauren R. Giannini 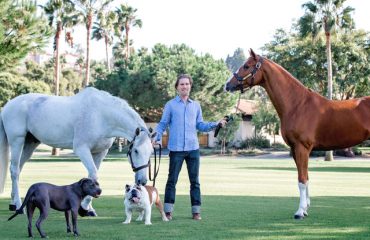 Karl Cook: His Passion and Love for Animals 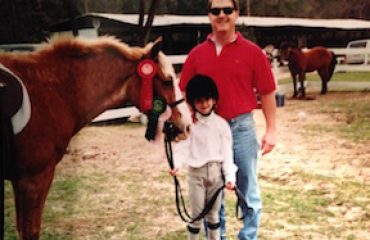 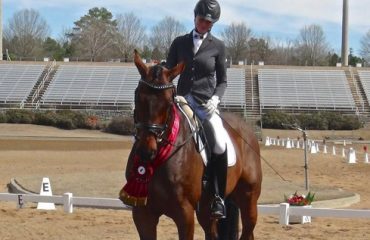