Late night 1984, 12-year-old Wendy Sasser sat with eyes glued to the television watching as equestrians competed at the Los Angeles Summer Olympics. Wendy had always loved horses, but that summer moment further fueled her passion. “Watching the Olympic equestrian events inspired me,” Wendy said. “Abdullah and Touch of Class were my favorite horses on the U.S. team. Seeing them navigate the course brought tears to my eyes — it was so beautiful and my desire to be part of the horse world grew.”

Thirty-five years later, that dream is being realized in the form of a 9-year-old KWPN gelding named F.J. Ramzes.

Like most horse-crazy young girls, Wendy consistently begged her parents for a pony. “Instead I got a baby brother!” Wendy joked. Growing up middle class in Los Angeles, California, with a teacher and an IT businessman as parents meant horse ownership wasn’t an option. “My father was born and raised just outside of Houston, Texas,” Wendy said. “We’d visit in the summers. Luckily, my family in Texas had horses and I begged my uncles to let me ride even though I didn’t know how. In addition, for my birthday, my parents would gift me a ride in Griffith Park.”

Wendy filled the time between family trips and birthday rides with visits to the public library. Her daydreams of riding and horse shows were fueled by the knowledge she soaked in from books. “I was an avid reader and devoured every book on horses from my local library,” Wendy said. “I kept a notebook on everything I read. I figured I could work it all out on paper first and translate that to actual riding later.”

Wendy is living her own best advice and has turned Ramzes’ reins over to trainer Lehua Custer. “Put the horse first and everything else will fall into place,” she said.

Dipping a Toe In

Wendy wouldn’t take her first riding lesson until she was an adult. “My parents are both hard workers and expected their kids to be too,” Wendy said. “When I started graduate school at the University of Southern California, they encouraged me to find a job. My mother knows best, so I didn’t fight her!”

Lessons turned into leasing and when her favorite lesson horse was retired from jumping and offered for sale, Wendy bit the bullet. “He was a bay 20-year-old retired hunter-jumper horse and lived with me until his passing in his mid-30s,” Wendy said. “He had a chewed-up ear from another lesson horse, which earned him the name Evander – after legendary boxer Evander Holyfield. I tried to make him into a dressage horse, but he never took to it.”

While owning her second horse, an Irish Sport Horse named Johnny, Wendy met her current trainer, Lehua Custer. “Johnny had been ridden to first level by his previous owner and also did a little jumping,” Wendy said. “We only did okay as a team in the show ring. I had a lot of show nerves and anxiety.”  Wendy found herself in transition; her previous trainer had left LAEC for other opportunities and she began her search for her new trainer. With limited opportunities to take lessons, she decided to focus on groundwork.

“Lehua had been an assistant for Hilda Gurney for 10 years before coming to LAEC,” Wendy said. “I would take lessons with Hilda from time to time and that’s how I met Lehua. When she first came out, I convinced her to ride Johnny. Lehua didn’t have her boots with her so she borrowed mine. Here she was in borrowed boots and saddle, Johnny wearing a hackamore and she has him moving out like a real dressage horse. I had never seen Johnny look that good. I was convinced!”

Wendy begged her parents for a pony when she was a child, but didn’t start riding until she was an adult.

Lehua became not only Wendy’s new trainer but also her good friend, and as Wendy edged closer to her 40th birthday, she knew she wanted to get closer to her childhood goals. “Johnny was a lovely horse, but he wasn’t built for dressage,” Wendy said. “I wanted something purpose-bred and at least 16.3 hands since I am 5’11”. A warmblood with the aptitude and good temperament. The horse needed to have three good gaits, nothing super fancy — sometimes fancy movers are too tough to sit the trot on!” With her wish list in hand, the search was on for her next dancing partner.

With the help of her father, Wendy pulled together a modest budget. A horse that was already trained or showing wasn’t in the cards. She spent the next year scouring ads for unstarted youngsters. “I bought F.J. Ramzes as a weanling off of a video,” Wendy said, “a nerve-wracking new experience for me that I don’t recommend!”

Ramzes remained boarded on the seller’s property in New York until early 2011 when he was shipped to Hilda Gurney’s Keenridge Farm in Moorpark, California. “He was shaggy,” Wendy said. “His coat was sun-bleached, he had a hay belly and a large head. I was in shock! Lehua assured me that we could train him up, sell him and purchase another horse.”

Ramzes lived at Keenridge for two years. “I’m a huge believer in young horses being in a program,” Wendy said. “I knew I couldn’t bring along a horse on my own, so I kept him in full training. He got a great start under Hilda’s assistants Kim Elsner and Tracy Young, and later with Priscilla Litman and Lehua.”

The rambunctious gelding grew up, filled out and settled down into learning what life as a dressage horse is all about. Unfortunately, a setback was lurking just around the corner. “One fateful Sunday I received a frantic call from the barn staff,” Wendy said. “Ramzes bucked his legs over the stall door and fileted the skin right off his right hind leg. After seeing the wound, his veterinarian recommended I send him to the equine hospital in Chino, California, to give him the best chance at a 100 percent recovery. The staff there did an excellent job of cleaning him up and suturing Ramzes back together.”

The wound itself took four months to heal and Wendy was there taking care of Ramzes day in and day out, learning new skills like wrapping an entire hind leg. “I’m a professional with elastikon,” Wendy said. “When he initially injured himself, Ramzes and I were both in shock. I was afraid I’d end up with a nice lawn ornament, and if that happened it would happen. Luckily he was never lame!”

Once Ramzes’ wound had closed and healed, he went back to work. Despite the injury, his temperament and desire to work remained the same. “Ramzes did pretty well at training level and became more focused through the first level work,” Wendy said. “It wasn’t until he started doing second level work that he began to understand his job and develop self-carriage.”

With Lehua in the irons, Ramzes impressed Scott Hassler at the 2014 USDF Sport Horse Prospect Development Forum. That was when Wendy knew she needed to give up the ride on her horse. “Lehua kept encouraging me to ride and show him but I knew he was special and could go all the way,” Wendy said. “One day he’ll be my schoolmaster and I’ll show him, but right now is Lehua and Ramzes’ time to shine.”

Through training, his movement went from good to amazing, and in the 2017 show season competing at third level, Ramzes won every test he entered and never scored below 70 percent, including at the USDF Region 7 and CDS Championship show. Those wins qualified Ramzes for the USDF Dressage Finals in Lexington, Kentucky, where he was the Third Level Open Champion and won the KWPN National Level Open Division award.

Riding the winning wave in 2018, Lehua and Ramzes were named to the U.S. Equestrian Dressage Development program and were able to work with Debbie McDonald in Wellington, Florida. “I knew if we wanted Ramzes to be an FEI contender, he’d need to compete back East and be seen by the judges and community out there,” Wendy said. “He’s currently in Ohio with Lehua so they have easier access to the shows and training from Debbie. He’s competing small tour right now. I dream about the Olympics, and I’m so excited to be part of this journey!”

Though Wendy wishes she could be in Ohio to watch Ramzes and Lehua train with Debbie, her new job as the manager of L.A. Care Health Plan’s health education department keeps her at home in Los Angeles with her Great Dane, Fiona.

“I miss my horse — I miss riding him, I miss talking to him, I just miss seeing him,” Wendy said. “But I’m living by my own best advice — always do what’s right for your horse, over your ego, over your own wishes. Put the horse first and everything else will fall into place. This horse gave me my dreams back and I’ll do everything I can to help him succeed.”

Marsha Hartford-Sapp: Training an Unadoptable Horse Named Cobra – The Amazing Story of a Wild Mustang Who Won Multiple Horse of the Year Awards… 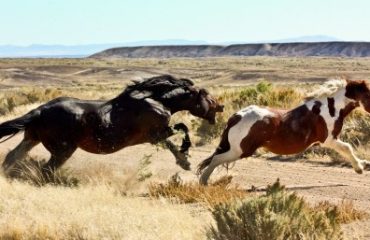 The Mustangs of Sand Wash Basin