Avery Murray Dudasch, born April 3, 2001, passed away at home embraced by the love of her parents John and Vicki Dudasch, and her beloved dogs, cats, guinea pigs and birds on June 27, 2012. Two days earlier, Avery went to the barn one last time to bid fond adieu to her amazing pony, Grace. She was just a few months past her 11th birthday when she lost a gallant 10-month battle with a rare form of brain cancer. Avery was known for her passion for horses, animals and the beauties of nature. She set the bar high, gave special meaning to the motto “I ride to be fearless” and, for a child of such tender years, demonstrated dignity and courage in the face of her impending demise far beyond the capability of most adults. We are privileged to have the honor of telling the story of a very special person and hope that it inspires you to carpe diem. Life, for Avery, was heartbreakingly far too brief.

“I did not grow up with horses, but they were always part of my soul as long as I can remember,” said Vicki Dudasch, who, at 28, started riding in college for PE credit. “I worked every day after that to stay connected to that world.”

In 1996, Vicki met Rochelle Costanza, owner and head trainer of Platinum Farms, a family-run three-day event training facility in Franktown, Colorado. “Vicki was unique,” declared Rochelle. “For an adult amateur woman who started later in life she was one of the most fearless people I’ve ever met. She was happy to ride whatever was available, even the difficult horses. She’s not a chicken. She’s fun to teach. That’s very rare. She has a true love of riding and the whole horse relationship. I think she’s amazing.”

Avery, with a horse named Paris, at the tender age of two. Although Avery started going to the barn when she was six weeks old, this is when “it began!” Horses were part of her soul.
Photo by Rochelle Costanza

According to Vicki, the magical world of horses opened up thanks to Rochelle, who “let me hang around, cleaning stalls and riding whatever she had available” and their friendship grew ever stronger over the years. Five years after Vicki married John Dudasch, she learned she was pregnant with Avery. The mother-to-be continued to ride, but on the flat only – no jumping.

“When Vicki insisted on riding while she was pregnant, I was concerned, but she was still riding my horses,” said Rochelle. “I thought she sat the trot really well with that big old belly.”

Avery was only six weeks old when she started accompanying her mother to the barn. “One might say she was nurtured to love horses, but to all who knew her it was apparent that they were part of her soul,” said Vicki. “Avery had the horse gene.”

Apples don’t fall far from the tree, of course, and Avery proved to be a cheerful, easy-going infant and toddler. Rochelle started parking the two-year-old on a pony during Vicki’s lesson, and Avery’s delight knew no bounds. “From day one when she started coming to the farm, she never cried, she never fussed. She loved being at the barn with the animals,” recalled Rochelle.

When the family moved to Oregon in 2004 for John’s job (engineering and construction), Vicki suffered worse than Avery, but part of the deal included a bribe: Vicki could buy a horse to take to their new home. Her first ever horse, Aly, was an off-the-track-Thoroughbred, 14, and hotter than a firecracker (still is at 23). After nearly three years, John finished the Oregon highway project and the family returned to Colorado. Mom and daughter couldn’t wait to get back to Platinum Farms.

Returning to Colorado started the wonder years for the Dudasch family. Vicki continued to compete Aly, who served as the rider’s schoolmaster. “She taught me patience, perseverance and she was fearless – Aly jumped everything and taught me to go and not be afraid,” said Vicki, who competed the OTTB beginner novice.

Meanwhile, Avery made do, riding some ponies belonging to boarders at Platinum Farms. Avery turned six and was eager to continue her equestrian education. In the summer of 2007, Cory arrived and she shared the sweet pony with her best friend, Hayden Hilles. The trio began taking lessons with Rochelle.

“Avery was totally not your typical kid. She was an old soul, insightful and very intuitive with animals,” stated Rochelle. “In a lesson she was great. She tried super hard to do everything I taught her. When she wasn’t riding, she would make courses and jump them on foot. She made arenas in her living room, too, and practiced whatever we had been doing in the lesson. I taught her to post without stirrups. She caught on fast. Avery was really easy to teach and willing to do whatever it takes to be a better rider. She hung out with her pony, grooming and washing him. She loved pink and purple accessories for her and the pony. Avery was cool to have around.”

Like many good ponies, Cory helped Avery build up her horsemanship skills. Avery learned to trot, canter and jump cross-rails with Cory who took care of his rider no matter what she asked him to do. Before long Avery was galloping Cory all by herself in the field. They started competing in little schooling shows and went to a hunter pace when Avery was eight.

“Cory had a little hitch and he wasn’t able to jump very high, but he cantered and jumped little cross-rails and logs and gave Avery the confidence to run around in the field all by herself,” explained Vicki. “It made her strong and did a lot of good things for her. Cory was perfect for Avery while we looked for the pony that Avery could go on with and event.”

In the spring of 2011, Rochelle found Gracefully Dun. Avery’s new soul mate arrived at Platinum Farms at the end of April, a few weeks after Avery’s 10th birthday. “We were waiting for the pony’s arrival on a school night at 2 a.m.,” recalled Vicki. “When that mare walked off the trailer, Avery and I found ourselves in tears. We were both so happy, and the pony was so beautiful. Little did we know the role that pony would play in our lives. I have always loved being at the barn late at night, and Grace’s arrival during that magical time is a special memory that I hold forever in my heart.”

While John never quite embraced riding, he understood how his wife and child felt about horses. He had observed how Avery, from an extremely young age, loved her dogs, cats, birds, guinea pigs and he was very aware of the special place that horses held in Avery’s heart and life. As soon as she could balance on his back, he indulged his daughter for years playing “horsey daddy,” even submitting to wearing a bridle to make her favorite game more real.

“I have to admit the wear and tear on my knees from years of rug-burns was some small part of my motivation to actually get her a real pony once she was old enough to ride,” stated John. “I was fortunate enough to be at her very first combined test (dressage and cross-country) when she was 10. I have to admit that I was very nervous when she started on the cross-country course. She had a few jumps that were challenging for her, but she and her sweet pony Grace made it around the course, and the expression of sheer joy on Avery’s face when she made it over the last jump was a moment that I’ll never forget.”

As Avery crossed the finished line, she exclaimed, “I didn’t fall off!” She was weeping tears of joy.

To be continued…Part two will appear in the October issue of Sidelines and we will post it on the website once the issue is released.

A final goodbye: Friends brought Grace to Avery’s house so she could sit on her pony, feed her carrots, rub her tail, breathe her spirit and say goodbye.
Photo courtesy of Vicki Dudasch

Please visit the Facebook page Avery’s Grace and “like” it. While you’re there, look in the timeline for three videos, especially the one called “A Very Special Life.” 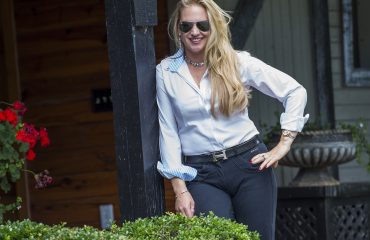 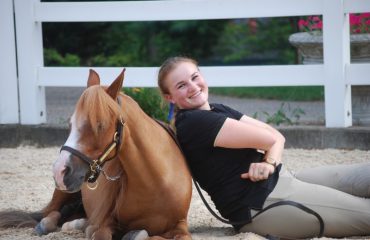