Hunter Holloway: Horses Are Her Future

Hunter Holloway had her first fall from a horse the day before she was born. No injuries to mom or baby, although it probably increased Hunter’s passion for riding, especially as she spent much of her infancy lulled by the rhythms of flat work, cradled in front of her mother, Brandie Holloway.

Hunter made her show debut at about 1½ in lead line. By 2, she was riding solo, competing in walk-trot mini stirrup. She admits that her sights were focused on jumpers and big fences by the time she was 5 or 6. In 2010, Hunter set the record for being the youngest rider ever to win a national grand prix when she piloted Argentina to first place in the $25,000 Dallas Harvest Grand Prix. She was only 12.

Hunter is all smiles after winning the ASPCA Maclay National Championship Finals.
Photo by Chicago Equestrian

Now 19, Hunter celebrated 2016, her final year as a junior, with wins in four grand prix, one Welcome jumper stake, one hunter derby, and at the Pennsylvania National Horse Show, the Under-25 Jumper Championship. In big eq, she piloted Any Given Sunday to win all three phases — hunter, jumper and overall — in the WIHS Equitation Championship at Washington International Horse Show. She earned a top 10 placing in the USEF Show Jumping Talent Search Finals — East and ended her junior career in a blaze of glory at the ASPCA Maclay National Championship Finals at the National Horse Show.

After winning the Maclay, Hunter posted on Facebook: “Still can’t quite believe it … It marks the end to what’s been an incredible journey and beginning of a new really exciting one. For my last show as a junior to end like this is truly a dream come true. I can’t thank all the amazing horses and people enough, it takes a village and I love mine. It’s been a wild ride filled with lots of ups and downs. I just really can’t thank the people who have been through it all with me enough. My family, trainers, sponsors, the horses, anyone who has a played a part in this, I love you guys to the moon and back. It wouldn’t have been possible without you.”

Living What She Learns

Hunter grew up totally immersed in her mother, Brandie’s, training and sales business, based on the family farm in Topeka, Kansas: Holloway’s Equi-Venture Farm, a boarding and training facility that accommodates 50 horses. Brandie and Hunter put in long hours whether they’re at the farm, away showing somewhere, or in Ocala, Florida, for the winter circuit. Their dedication, commitment and effort make each success even more significant and satisfying.

Hunter and her mother Brandie Holloway
Photo by Chicago Equestrian

“If you don’t have money, you have to work harder to get where you want to be,” said Brandie. “For juniors, you either have to be a trainer’s child because we can find horses for sale to make up, or you leave home when you’re 14 and go live as a working student with a top trainer. We bought Hunter’s first pony when she was 6. Muffin was a large pony school horse in Micaela Kennedy’s program, and Hunter got her ready to show by riding her all day, often bareback, around the show grounds. By the time they went into a class, the pony was quiet.”

Hunter was very tall for her age and after showing Muffin locally in short stirrup, they headed to the rated shows where Brandie got the shock of her life. “Short stirrup was more expensive than a grand prix horse to show,” said Brandie. “I told Hunter, ‘I’m sorry, honey, you have to do the large ponies because we can’t afford an $1,100 show bill! At least in the larges, there aren’t that many and you’ll get some prize money.’ We went right into the large pony hunters.”

Hunter didn’t stay in the larges for very long. By the time she was 12, she was pushing 5’8” and today she’s 5’11”. But back then, when she was still riding her large pony, she had her sights set on grand prix’s big jumps.

“One time at a show when my mom was schooling me on my pony, she told me to do the inside, diagonal and outside, but don’t do the last line,” recalled Hunter. “Someone had been schooling their grand prix horse and the fences were set big. So we jumped the lines mom told me to jump and, next thing I know, I’m doing that line and jumping a 4-foot fence on my pony!”

Hunter said she knows it takes a village of amazing horses and people to make it in the show world.

By the time Hunter reached middle school, she was showing so much that she needed online classes in order to keep up. She developed stamina, getting to the barn at sunup to ride, train and show, depending on the day, into the evening when she faced several hours of homework. Hunter credits both her parents with making sure she did well with her studies.

“My mom told me there’s nothing worse than a dumb horse rider,” said Hunter. “My father, Tim Schuknecht, was always insistent on good marks in school When I was missing so much school, he talked to my teachers and got informed about online schools. I really wanted to show on the circuit, which meant missing most of the school year, and my dad finally agreed to online school.”

Hunter’s first year online, seventh grade, when her laptop became her classroom, was a challenge, but she figured out how to make it work. Her efforts harvested As and Bs, which made both parents happy. She’s planning on doing college online, but the horses, at this point, are her priority.

Hunter credits Brandie with being a lifelong, primary influence in terms of riding and horsemanship. “There are so many lessons I learned from my mother, it’s hard to narrow it down to a few important ones because they’re all important and I’m always learning,” said Hunter. “My mom has played a key role in everything I do. We’re both so competitive. We want to do the best we can. We want to win all the time. Just keeping that under wraps and maintaining the more personal side of our mother-daughter relationship can be a challenge, but we wouldn’t be as successful or as good as we are if we didn’t have the drive to always do the best we can.”

Don Stewart has been another major influence on Hunter, her horsemanship and sense of humor. Hunter recalls being 12 or 13 when she first started working with Don. “It was the year I rode for the first time in the Prix de States at Harrisburg [Pennsylvania National],” she said. “I didn’t win. It was an experience, and I learned a lot.”

Don, who consistently produces winners in hunters, jumpers and equitation, has a reputation for being funny. “Humor’s a strong point for me. I keep it on a lighter side, because Hunter puts a lot of pressure on herself,” said Don. “She has a wonderful work ethic. You don’t ever have to worry about whether she’s willing to do everything she can to do well. She follows directions. She’s very strong-willed. She isn’t afraid of work.”

Hunter said, “The best advice Don gave me last year was to take things lightly, not to take things so seriously. He’s a really funny guy, absolutely hilarious. I get very focused and uptight because I want to do the best I can. Don always makes me laugh and tells me just to have fun with it.”

The transition from junior into open competition is rarely without some bumps, but Hunter knows what she wants — the horses are her future.

“I started riding with George Morris, who coaches me for the FEI jumper classes, and I hope to keep riding with him whenever I can,” Hunter said. “My goal this year is to be consistent at 1.60 meter. My ultimate goal is to make the team someday for the Olympics.”

More than just another horse-crazy kid dreaming of equestrian glory, Hunter has already proven she has what it takes to get there: horsemanship, dedication to excel, determination and an indomitable work ethic, along with encouragement and support from her village of amazing horses and people. 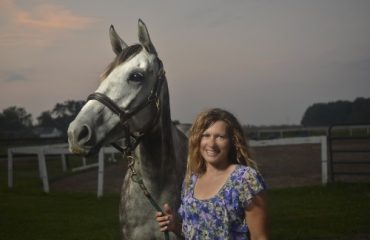 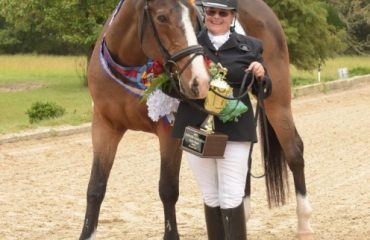 Never Too Old: Journey With Horses and Friends 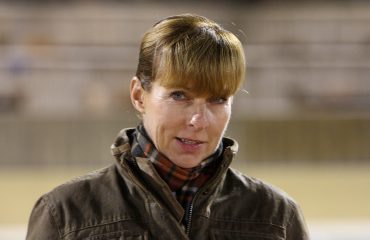