It’s a gorgeous day at Winley Farm in Millbrook, New York, but Fernanda Kellogg isn’t distracted by the spectacular scenery. She’s in the midst of a training session with Olympic gold medalist Peter Wylde, and is laser focused on the oxer ahead of her. With a competition in two days, she’s fine-tuning her stadium jumping technique. Her partner in this endeavor, a 14-year-old Warmblood mare named Attlee, is equally intense. Peter nods approvingly as they circle the course.

Fernanda Kellogg occupies a unique position in the eventing world. An enthusiastic competitor since her teenage years, she also supports the sport as a horse owner at the highest professional levels. Moreover, Fernanda and her husband, Kirk Henckels, are the owners of Fitch’s Corner, the farm which every July for the past 21 years has hosted the Fitch’s Corner Horse Trials, the premier lower level three-day event in the United States. Very few equestrians have such a multi-faceted view of the sport as Fernanda.

Fernanda on Attlee during a lesson at Winley Farms. (Photo by Rebecca Baldridge)

How It All Began

Fernanda took her first riding lesson at the age of 10 at Sunnyfield Farm in Bedford, New York, and horses have been an indispensable part of her life ever since. By the time she shipped off to the Foxcroft School in Middleburg, Virginia, at 13, she was a competent rider in the basic hunt seat. Given the school’s location in the heart of Virginia hunt country, she got her first taste of riding to hounds. “It was a big deal to go out with the hunt, as it was the only freedom we were allowed,” she remembers. As a bribe for good behavior, Fernanda’s parents bought her a gelding named Maverick. “He was more successful at Foxcroft than I was,” she recalls wryly. “He stayed four years, but I only lasted two.”

Fernanda moved on to the Knox School on Long Island, where she took lessons from “Galloping Grandfather” Harry de Leyer, the owner and trainer of show jumping sensation Snowman (see Sidelines May 2013). Fernanda began riding competitively at local shows on Long Island, and under Harry’s tutelage, made it to the 1968 National Horse Show in Madison Square Garden. She won the Amateur Owner division at the Garden with her horse Rafiki, who in 1969 was ranked third in the country in the American Horse Show Association’s Horse of the Year awards.

Fernanda competes as avidly today as she did as a girl, and in 2012 was ranked second nationally as a USEA Master Amateur Beginner Rider. She keeps to a training schedule that would exhaust riders half her age, and that’s in addition to the time she spends in Manhattan for her philanthropic work. Competing twice a month on average, Fernanda typically rides two horses a day, five or six days a week, and finds time for the gym as well. She hones her dressage technique, as well as cross-country and stadium jumping, with regular lessons and, in addition to Peter Wylde, she works with trainers Trish Helmer for dressage and Kerry Torrey and Sally Cousins for cross-country.

Kirk Henckels, Boyd Martin and Fernanda dressed the part for the Blue Jean Ball’s celebration of the Chinese Year of the Horse during the Fitch’s Corner Horse Trial.
(Photo by Brian Wilcox, Connecticutphoto.com)

While excelling as a horsewoman, Fernanda enjoyed an illustrious 28-year career as a senior executive with Tiffany & Company. She spent most of her tenure with the company in public relations, and in 2009 was named chairman of the Tiffany Foundation, which supports environmental conservation. She retired last year, which leaves her more time to focus on her beloved sport.

Fernanda has worn many hats — executive, philanthropist, environmentalist and socialite. But she nonetheless defines herself primarily as a horsewoman, as a little girl who loved horses and never outgrew her passion. She says, “the self-confidence derived from what I’ve achieved in partnership with my horses is the greatest gift from my riding life.” Undoubtedly this confidence has played a key role in her many achievements.

Perhaps the most significant way Fernanda has expressed her passion is by founding the Fitch’s Corner Horse Trials. Twenty-one years ago, Fernanda’s daughter approached her mother about organizing a summer equestrian event at the family farm.

Eric Bull, today the owner of ETB Equine Construction and builder of the world-class Fitch’s Corner cross-country course, was there from the very beginning. Eric began working for Fernanda in the summer during college and, after graduation, took on the role of farm manager. With guidance from Fernanda, Eric and Fernanda’s daughter worked in tandem to put together the first horse trial. According to Eric, “60-75 horses participated that first year; and it poured rain. Fortunately, all the problems were blamed on the weather.”

Fernanda quickly became the driving force behind the event, and 21 years later the Fitch’s Corner Horse Trials plays host to 250 competitors in a three-day weekend extravaganza. Today the weekend also includes Fitch’s Market, which this year hosted 50 vendors; Saturday night’s Blue Jean Ball, the annual highlight of the Millbrook summer season; the more formal Sunday Spectators Luncheon; and a classic car show. “Fernanda wanted to create something special for low-level riders, since they’re the backbone of the sport in terms of numbers and financing. But Fitch’s Corner is much grander than other low-level events and has something for everyone,” Eric said. “You don’t need to be a horse person to have a good time.”

Eric credits his success as a course builder to the start he got at Fitch’s Corner, and he’s delighted to remain a vital part of the event, working with course designer Derek DiGrazia and course decorator Janine McLain. “Fernanda is great to work with, generous, and a good manager who gives you the ability to do your job well. She stands behind you,” Eric said.

Four-star eventer and United States Olympic team member Boyd Martin also gives Fitch’s Corner a rave review. “It’s one of the best horse trials in the world, in my opinion. Fitch’s Corner is like Rolex for preliminary horses.” Boyd met Fernanda six years ago, when he conducted the inaugural Fitch’s Corner Memorial Day Clinic. They hit it off immediately and a partnership flowered. “Fernanda’s ideas and visions are beyond belief to most people, but for her they turn into reality. She’s a real doer, and she understands and appreciates every person involved in equestrian sports — riders, grooms and owners alike.”

Their cooperation moved forward from the annual clinic, and now Boyd and his wife, Grand Prix dressage rider Silva Martin, often work with Fernanda at her winter base, Fox Frolic Farm in Aiken, South Carolina, during the cold weather months. Of all their joint projects, though, it was Fernanda’s effort in putting together and joining the syndicate to purchase Boyd’s mount for the 2012 Olympics, Otis Barbotiere, that stands out in his mind. “The Millbrook equestrian community is integral in sponsorship funding and competing at the Olympic level. It took 10 people to buy Otis, and their decision changed my life. Fernanda played a huge role and I’m forever in her debt.”

Fernanda also supports the sport by participating in the American Eventing Owners Task Force, which helps event riders partner with top-level horses. In addition, she’s a member of the syndicate that owns Boyd’s 2014 World Equestrian Games mount, Shamwari 4. Fernanda cheered Boyd on at both the 2012 London Olympics and the 2014 World Equestrian Games in Normandy, where Boyd and Shamwari finished in the top ten.

Fernanda’s other equestrian passion is foxhunting, and she’s been a member of the Millbrook Hunt for over 30 years. As she explains, “There’s nothing more magnificent than the hounds at full cry and galloping flat out without a worry in the world. I cherish every day I get to put my leg over a horse and go hunting.” Parker Gentry Thorne, Joint Master of the Millbrook Hunt, said, “Fernanda is a treasure to us all. Her vast experience, grace and wisdom have made her an invaluable member of the board of governors. She often helps lead the first and second flight, and always ensures that the members have a safe and positive day out with the hounds.”

As Fernanda emphasizes, the hunt is about much more than the glories of riding hell-for-leather in pursuit of the pack. Typically, hunts are a driving force in land conservation and protecting the natural beauty of the countryside. Foxhunting requires extensive areas of open land, which in turn means that the hunt counts on the generosity of landowners willing to grant access to their property. Fernanda has worked tirelessly with the Dutchess Land Conservancy to encourage landowners to put their land under conservation easements, which offer tax incentives in exchange for foregoing development. Fernanda says that she and her husband Kirk look at themselves as “stewards of the land” rather than owners, and are committed to maintaining the pristine beauty of Fitch’s Corner for the hunt and the greater community. One easement precludes development of the land while the second grants the Millbrook Hunt access to Fitch’s Corner as long as the hunt exists.

The Most Spectacular Fall

Self-confidence and discipline aren’t the only benefits from Fernanda’s years of riding. Shortly after Kirk Henckels moved to Millbrook in 1995, he met Fernanda at a dinner party. The two bonded over their mutual love of horses, hacking across the countryside together and riding to the hounds. Each year the Millbrook Hunt gives the Most Spectacular Fall award to the member who parts from his or her horse in the most dramatic fashion. In 1997, though, the award went to Fernanda and Kirk for “falling spectacularly in love.” Indeed, Kirk proposed on horseback.

Clearly, the equestrian life has been very good to Fernanda Kellogg. When asked what advice she would give to horse-crazy little girls and their parents, she had this to say: “For parents, have a big bank account. For the young and horse mad,” she added, “never lose the dream. There are moments when school, a job or a romance might take precedence, but the horses will always be there.” 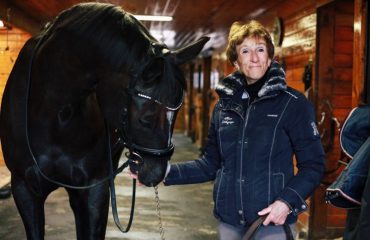 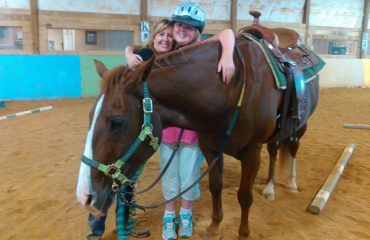 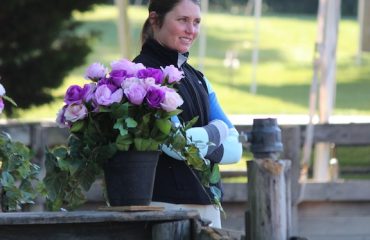