With only five years of eventing experience, former jumping superstar Marilyn Little helped the United States Eventing Team take home the gold medal at the Pan American Games in Canada. Marilyn also rode away with the individual gold, proving that …

Marilyn Little with her team and individual eventing gold medals from the 2015 Pan Am Games in Canada.

The Land Rover U.S. Three-Day Eventing Team had a mission to harvest gold at the Pan American Games, held in July in Toronto, Canada. Phillip Dutton, Lauren Kieffer, Marilyn Little and Boyd Martin did exactly that, maintaining their lead from dressage onward. They scored four double clears on the cross-country and three double clears in show jumping en route to the coveted team gold, which also qualified the U.S. for the 2016 Olympic Games in Brazil.

David O’Connor, U.S. chef d’equipe, knows what it takes to achieve the podium. He won individual gold and team bronze at the 2000 Athens Olympics, team silver at the 1996 Olympics in Atlanta, and team gold at the 2002 World Equestrian Games, to name a few.

The last time the U.S.A. won on the world Three-Day stage was team gold and individual bronze at the 2011 Pan Ams in Guadalajara. American eventers didn’t medal in 2010 at the World Equestrian Games in Kentucky or at the 2012 London Olympics. The 2014 World Games in Normandy were disappointing, to say the least. David’s single-minded goal, since being appointed chef in 2013, has been to get American eventing back on the podium.

This Pan Am team gold is special, for several reasons. It wasn’t Phillip’s first medal and, with luck, it won’t be his last. He grew up doing Pony Club in Australia. In 1991, when he was in his late 20s, he moved to the U.S.A. to prepare for the 1996 Olympics in Atlanta where, representing Australia, he earned his first team gold. In 2000, he rode on the home team, winning gold at the Sydney Olympics. Phillip became an American citizen in 2006; the following year, riding for the U.S.A., he harvested team gold and individual silver at the Pan Am Games in Rio. Perhaps it’s a good omen that the next Olympics are in Rio.

It was the first medal for Boyd whose successes span 20 years. It’s the first medal and first time to represent the U.S.A. for Lauren Kieffer, who was 12 when she got hooked on eventing and 18 in 2005 when she moved to Virginia to learn from David and Karen O’Connor. Phillip, Boyd and Lauren are well-known in the eventing world. Marilyn pretty much took off like a rocket when she decided to give the equestrian triathlon her best shot. That’s why, for Marilyn, contributing to the team gold and earning the individual gold are dreams come true: she only started eventing five years ago.

Eventing Neophyte
Marilyn was a successful jumper rider who coached event riders at her family’s Raylyn Farms Inc. in Frederick, Maryland. In October 2010, while watching the cross-country at the World Games in Kentucky on TV, she decided to try it. She had to work on the dressage, but enjoyed the challenge. Marilyn thought her grand prix jumper, Udonna, would be perfect. Their first horse trial was Training Level the following week. Four months later, they won a division of Preliminary Rider in Florida. By spring they were competing in Europe. A junior who wanted a jumper bought Udonna and Marilyn returned home with three event horses, developing two of them to the four-star level.

Marilyn with her parents Ray and Lynne Little.

“I grew up in a family where we sold horses for a living — we still sell horses, that’s how we support ourselves,” said Marilyn. “I was one of the kids who grew up with professional parents. The group just ahead of me had McLain Ward and Lauren Hough. Liza Towell was in my group. I include Kent Farrington, because he grew up in the States in that lifestyle. He was a very close friend of mine. When you grow up in that environment, you’re very privileged — you get to eat, sleep and breathe your sport and your passion.”

It isn’t all rosettes and celebration, however. Horses get sold, but there are perks. “I had the opportunity to ride many horses — some wonderful, some not so wonderful,” said Marilyn. “I rode some very experienced horses that taught me a lot very quickly and a lot of inexperienced horses that I got to test theories on, gain mileage on and learn to survive on.”

By 1999, Marilyn had been competing at the Grand Prix jumper level for three years and had at least five wins to her credit, including one at the National Horse Show at Madison Square Garden. In 2000, as a member of the U.S. team, she was the leading international competitor after winning the CSIO four-star at the Dublin Horse Show in Ireland.

Marilyn continued to ride and compete, working in the family business. It was a bit of a predicament, wanting to go on, because as soon as the horses started to win, they got sold. She couldn’t shake off the big dreams and, when she was inspired to try eventing, she looked at it as an opportunity to see what she could do in a new venue. She chose Udonna to give her a good start in the new sport.

“A good horse is a good horse, regardless of discipline at the end of the day,” said Marilyn. “I thought there might be a possibility of meeting some owners and sponsors who would be interested in getting behind a program like mine.”

Marilyn’s gold medals from the 2015 Pan Am Games.

Proof of the Program
The Land Rover U.S. Three-Day Pan Am Team proved themselves all the way to the podium. “When we were standing there for the team gold medal, listening to the National Anthem play, I was so proud to be a part of the team, to be with these incredible riders and to have the opportunity to represent my country,” said Marilyn. “Then, when I was standing up there with the individual medal, listening to the national anthem, I was so proud to be part of my family. I’m so grateful to my parents for all the opportunities that they’ve given to me and for everything they’ve made possible. They’re the reason for my career. They’ve been my incredible support system and strength — they’re the ones who made it possible for me to stand up there.”

Then, there’s the chef d’equipe and the amazing support team he assembled who worked in many capacities with horses and riders. “We’re lucky to have David as chef — I think he’s someone who wakes up every morning and says, ‘How are we going to earn a medal?’ I think that’s the goal for David every day of his life,” said Marilyn. “There’s nobody more driven to help his team succeed. David’s as hands-on as you could want a team leader to be. He brings incredible motivation. He’s the driving force behind this team, not just in words, but also in actions. He’s out there doing the work right alongside you. He’s very involved in the development of the horses and their training programs all the way to the competitions.”

Last year, before the World Games, Marilyn continued to work with David in Chantilly, France. “That’s when I came to understand David’s system,” she said. “David is very methodical and consistent. Those characteristics helped to take my understanding of dressage to the next level. He put in so much time and thought on my behalf. I only had one horse to train at that time, RF Demeter, but when I came home to the States, I applied the training program I had developed, working with David, to every horse. The dressage scores dropped about 10 points across the board. David helped me to start scoring in the 30s and 40s.”

Put to the Test

RF Scandalous, known as Kitty around the barn.

In Canada, partnered with RF Scandalous (barn name Kitty), a mare Marilyn has believed in all along, they scored 40.2 in dressage for third place. Ruy Fonseca of Brazil on Tom Bombadill was in first on 38.9. Canadians Kathryn Robinson and Let It Bee stalked in second with 39.8 with Jessica Phoenix and Pavarotti in fourth on 42.1.

The cross-country recorded 18 double clears; unfortunately, Kathryn and Let It Bee were eliminated at the second fence. Show jumping demonstrated once again the impact that one four-fault rail has on the final outcome. Jessica and Pavarotti put in a double clear. So did Marilyn and RF Scandalous, just 1.4 penalty points out of first place. Ruy and Tom Bombadill dropped the final fence, relegating themselves to third and the bronze medal, moving Jessica and Marilyn to silver and gold respectively. Team placings didn’t change: Brazil claimed silver (140.7), Canada the bronze (163.0) and the U.S.A. harvested gold on 133.0.

“By the time we reached Canada, our team had been training together since the beginning of the year,” said Marilyn. “We knew each other quite well and enjoyed a great camaraderie. We had trained side by side, experiencing ups and downs together for months. There was so much shared experience by the time we got to that medal ceremony. It was just amazing to be in the victory gallop with them. Phillip is an incredible rider, horseman and sportsman. Although he wasn’t riding last, he was in many ways the team anchor. He rode first, went out on the cross-country to find out how it would ride, and brought back the information that would help the rest of the team to succeed.

“Lauren is a true rising star. She has an incredible work ethic and a very classic program and technique — she could succeed in any of the disciplines,” continued Marilyn. “Boyd was one of the first to befriend me when I started this sport. When we were leaving Toronto, at the airport, he said, ‘You know, I’ll never forget the first time I ever saw you trying to event Udonna!’ Boyd’s the older brother I never had.”

When RF Scandalous came into the Raylyn program, she was a good horse with a questionable record. “With the help of the incredible team of people behind her, Kitty has become a great horse with a great record,” said Marilyn. “I can’t imagine a horse I’d rather ride. I’m so excited about tomorrow.” 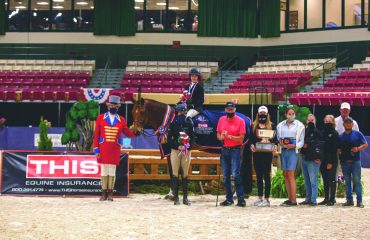 The Ins and Outs of Indoors 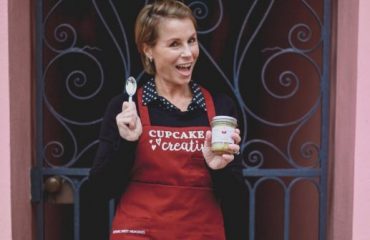 Rita Mae Brown: Books, Breakfast and the Bravery of the Foxhunt!