Julia and Rita have jumped their way from a secret to great success.
Photo by Shawn McMillen

Success on the A circuit is often equated with expensive horses and full-time professional training. There is no denying that this combination is critical to the success of many; however, every now and then riders like Julia Davis of Apex, North Carolina remind us that perseverance, courage and a little bit of luck can also bring victory.

Like most teenage girls, Julia wanted a horse. She often walked to the stable near her home to visit. She decided her 13th birthday present would be a riding lesson.

Once seated in the saddle, she was scheming to buy a horse of her own. The very next day, she searched online ads but, with only $200 cash, her options were limited. Weanlings, stallions and 30 year-old lesson horses were the only choices.

Though completely inexperienced herself, Julia wanted a young horse to grow-up with. She nearly ended up with a four-year-old stallion, but when the seller asked to speak with her parents she quickly ended the call. Julia had no intention of telling her mother she was buying a horse.

Eventually, she found the ad she was looking for – a two-year-old, 15.2 hand, sorrel mare named Fly Me To The Moon, or Rita. An unregistered Quarter Horse, Rita was described as unruly and untrained. The seller warned that Rita cow-kicked and bit too. Once the sale was final, Julia found a hauler on Craigslist to bring the mare home.

Rita arrived at a neighbor’s place, a few doors from Julia’s home. “My neighbor had lots of animals – goats and chickens – that he let me come over and play with any time I wanted,” she said. “He always told me I could bring an animal there.”

He never expected her to bring a horse.

He agreed to let Rita stay and promised not to call her mother. “When Rita got off the trailer I thought she looked small, but I didn’t know what 15.2 hands meant,” Julia reminisced. “I later learned she is only 14.1 hands.” She also learned the shaggy coat Rita wore was not to keep her warm, but were actually signs of neglect and malnourishment.

Rita when she first arrived.
Photo courtesy of Julia Davis

Even with the sale finalized and Rita on the property, Julia never told her mother she owned a horse. She cautions others not to pursue the same path to ownership. “It was a terrible idea,” she admits. “You have to make sure you have a solid place to have a pony and know how to take care of it before buying one.”

She relied on horse books, RFD-TV and online training videos to learn how to care for, ride and train the green mare. When questioned about her sudden interest in horses, Julia told her mother the neighbor had bought an untrained horse and allowed her to help with the training.

Both of Julia’s parents suffer from devastating illnesses. When Julia was a toddler, her father was placed in long-term care after suffering from a debilitating aneurism. Her mother battles her own health issues, including degenerative disc disease and rheumatoid arthritis. Since both parents were preoccupied, her mother never questioned Julia’s explanation.

So, the charade continued for three months. Until the neighbor tired of chasing Rita and repairing fences after she’d escape. He called Julia’s mother and told her the horse had to go. Her mother, of course, argued that it was his horse, not Julia’s.

Shocked to learn her daughter had purchased and kept a horse in secret for months was too much to take in. “My mom didn’t yell, normally she does,” Julia recounted. “She looked at me and asked me if I had bought a horse.” When Julia confirmed this, her mom locked herself in her room for a few hours.

“It scared me, I didn’t know what she was going to do,” she said. When her mother was ready to discuss the situation she told Julia her punishment was 100 percent financial responsibility for everything this horse was ever going to need.

Julia knew she could do it. After all, she had managed to purchase the horse, transport her and care for her for three months all on her own. She was determined to make the situation work long term.
Earning enough money to support Rita was not Julia’s largest hurdle to overcome – it was her lack of knowledge. Local trainer, Linda Bennett, offered Julia lessons on scholarship to teach her the important fundamentals of horsemanship. “My mom couldn’t always drive me because of her back so the lessons were on and off, but a big help,” Julia said.

In the beginning, Julia rode western and intended on running barrels. But when she moved Rita from her neighbor’s house, the barn she chose had jumps and she decided to give it a try. She competed at a few local shows in the green large pony hunters division, but the jumpers really caught her attention. Early in 2011, the duo transitioned to jumpers and found their niche. Rita could jump the moon and the two steadily improved.

Julia and Rita show off their winning jumping style.
Photo by Shawn McMillen

In 2013 Julia turned 18, which marked her final year of eligibility for the Junior Pony Jumpers division. Intent on making the year a memorable one, she graduated high school a semester early to devote all of her time and energy to competing.

And a memorable year it was. Julia traveled with the USHJA Zone 3 Team to top level competitions including the Devon National Horse Show, the National Pony Jumpers Championship Pony Finals and the North American League Finals held at the Pennsylvania National Horse Show and others, coming home with ribbons every time.

She and Rita were even in the running for the Horse of the Year Award.

Despite all her critics, the pair has attracted a lot of attention. Julia has received several offers from individuals interested in buying the mare with one offer totaling $50,000, enough to pay her college tuition. “I turned them down and they thought I was crazy,” she laughed, “but I couldn’t sell her. She puts up with me!”

Though Julia can’t keep Rita in full-time training, she credits folks who graciously helped her along the way including Rachel Kennedy, co-owner of ESP Farm in Brookville, Maryland, and Brittany Tasho, assistant trainer, who coached her at shows and the zone finals.

“I got really lucky with this pony,” Julia recognized. “Rita has the best brain and that’s what got us this far. Other horses won’t put up with that (an inexperienced rider).”

Julia started classes at a local community college in the fall of 2013 with plans to transfer to a four-year school to major in psychology and minor in business. While attending school, she plans to keep Rita and begin training for eventing.

Though others were skeptical, Julia never faltered in her devotion to riding or to Rita. She benefited from the generosity of those who wanted to help her develop as a rider and has proven there are other ways to succeed.

About the writer: Katie Navarra has worked as a freelance writer in the horse industry for 12 years. She has been a lifelong horse lover and recently purchased a Quarter Horse mare with hopes of re-entering the show ring in 2014. 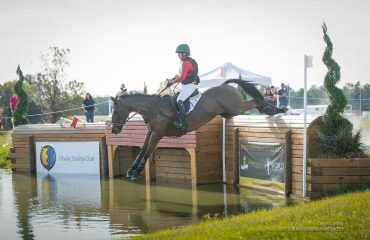 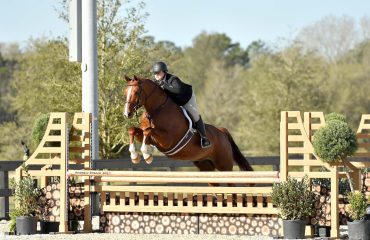