Ariel and Stormy have developed a strong bond.

Stormy had the odds stacked up against him. Anyone could tell from his ragged hair, barbed-wired scars and underweight body that the dapple-grey Thoroughbred’s life had been difficult. The tattoo under his lip branded him as an off-the-track racehorse, and the few riders that had been on his back were thrown off and disinterested in riding him again.

The only girl that did care, Ariel Levin, wasn’t allowed to have a horse.

Ariel got hooked on riding at the age of 4 when her dad took her on a tourist trail ride while on vacation in West Virginia. As soon as they got back, her dad started looking up places where she could take lessons, and she began riding at a school lesson barn in Orlando, Florida. That’s where she came across Stormy.

“They put a girl on him to try him out, and he took off,” Ariel said. “The next time someone tried riding him, he took off and threw the girl into a tree. That continued to happen with anyone that tried to ride him. Meanwhile, I was trying to clean him up.”

She worked with Stormy until she could groom him on crossties. That’s when her trainer finally allowed her to ride him. “I knew what he did with some of the other riders, but I wanted to take the chance and ride him to get to know him better,” Ariel said. “I rode him and jumped him and everyone watched in disbelief that this horse was acting like such an angel with me and was so evil with anyone else who got on his back.”

But all of Ariel’s hard work was about to be for nothing. Her family was moving and so the barn wasn’t going to keep Stormy. He was going back to his original owner.

Unfortunately, Ariel’s parents didn’t want to buy her a horse, so Ariel spent days in Stormy’s stall — refusing to believe that the two would be separated. She was determined that somehow Stormy would move with them, and got on the phone with her father.

Ariel celebrates their 2nd Place win in the Child/Adult Classic at the ESP Summer Show in Wellington.

She explained what would happen to Stormy if they didn’t take him, and finally handed the phone to her trainer as a last attempt. “When they hung up, my trainer said, ‘Congratulations, you just got your first horse!’” To this day, Ariel says she’s still shocked that her parents agreed to it, and that she has her own horse.

Stormy and Ariel moved to Wellington, Florida, and after a rocky start of trying to find a trainer that was a good fit for the young horse and rider, they hit the show circuit. In 2013, Stormy’s first year showing, they competed at the Winter Equestrian Festival racking up ribbons and earning a Reserve Championship. The next season, they began competing in the Children’s Jumpers and worked their way up to second in the 1.15 M&S Classic.

Ariel, 16, is looking forward to training for the NAL or M&S finals in Children’s Jumpers and loves the satisfaction that comes from hours of training and bonding with Stormy. She now trains with Russell Rodriguez out of Juan Ortiz Stables.

As she looks back from where Stormy started to where he is now, she gives encouragement to anyone thinking about rescuing a horse, but warns that it will never be easy. “It takes hard work and dedication, and most importantly the passion to want to help and build a horse back up from its foundation. No question, there will be doubters, and the struggles will be hard to overcome at times,” she explained.

Now that Stormy is confident, Ariel knows he’s the most competitive out of the two of them. Aboard a horse that would once barely keep riders in the saddle, Ariel smiles when she enters the show ring. “All I have to do is sit back and let him do what he loves to do.”

Stormy and Ariel — doing what they love to do!

About the writer: Kayla Jones is a rising senior at Bangor University in Wales where she is studying creative and professional writing. When home in Asheville, North Carolina, she enjoys trail riding her horse Stroker and learning dressage. 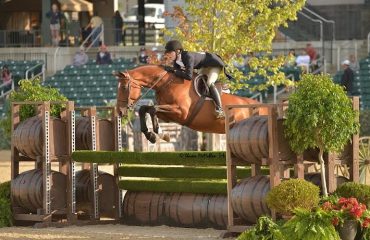 Emma Waldfogel Makes Her Mark on the Hunter World 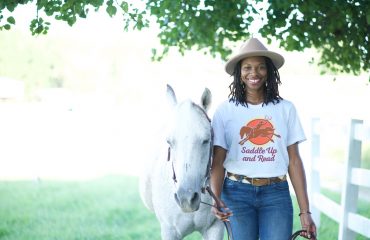 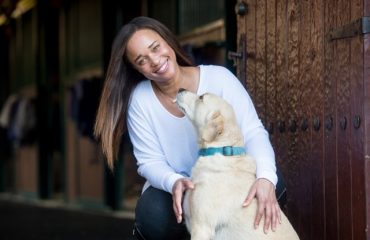 Paige Johnson: Helping Dogs in Need Through Their Voice Rescue