While Lily has a prosthesis, she doesn’t wear it often and doesn’t ride in it.

It was an unusual scene when Lily Rhodes — bruised, battered and missing her right arm — was wheeled through the emergency room in perfectly good spirits on the heels of a horrific ATV accident. Even at 14, Lily was already looking on the bright side of life.

Lily and Charlie at the Tulsa Expo Center

Laughing as she recalled her uncanny, cool composure during what most would find a traumatic experience, Lily, now almost 17 and a US Equestrian ambassador, said, “One of the first things I said to my mom when I saw her was, ‘I’ll have to do Western pleasure.’”

Quitting riding, of course, wasn’t an option for someone whose life revolved around stride extensions, leg yields and the dedication to perfect rides down center line. “The first thing I wanted to do after the accident was see my horse,” she said. “I knew things would be difficult, but I wasn’t discouraged. It was something that was sad, but there’s no point in being sad about it all the time.”

A Change of Mount
A month after the incident, Lily was back in the saddle and, while she opted to stick with dressage, she quickly realized one component of her equestrian career would have to change.

Lily’s adolescent mount was a Haflinger pony who — unsurprisingly — was a tad heavy on the hands. Though Lily describes the pony, named Pippin, as a safe and sweet horse with “the biggest heart ever,” he wasn’t exactly receptive to the light hand aids Lily would need to employ going forward.

Enter Charlie — a Paint gelding whom Lily describes as one of the best things that’s ever happened to her and, coincidently, something that likely wouldn’t have happened without her accident. Previously a jumper and new to dressage, Lily said, “Charlie is great and agreeable.” Simply put, she said, “He is my heart horse.”

Together, the duo are competing at Training Level working on some of the basics like maintaining the right headset — something Lily jokes Charlie hasn’t quite worked out yet. But while she’ll gladly take her time building a solid foundation, Lily knows Charlie is the perfect horse to advance through the levels with.

The Bright Side
Looking back on life after the accident, Lily is quite the optimist. “I try to look on the bright side of things,” she said. “It really was unfortunate to lose an arm, but there are so many good things that came from this, like Charlie. I wouldn’t have him if this didn’t happen. I wouldn’t have had all the opportunities I’ve had, like partnering with US Equestrian.”

So while Lily now struggles with tasks that were once second nature — from writing to hoof picking — she doesn’t waste much time brooding or wondering what life could have been like. “Nothing,” she said, “is going to happen with me sitting in my room and shutting myself off from the world. The only way forward is to get better.”

Lily does have a prosthesis, but doesn’t wear it often or ride in it. “Because I’m missing an elbow, the harness to keep my prosthetic on is very uncomfortable,” she said. “I prefer not to wear it, just because it feels more natural. I’ve adapted well to life with one hand, so I don’t find myself needing my prosthetic. However, I find the technology fascinating, and enjoy experimenting with it!”

Chronicling her Adventures
Luckily for Lily’s 30,000-plus Instagram followers, she’s been sharing her adventures online. From afternoons spent hand grazing to time in the ring, Lily, who’s been known to coin herself on Instagram as “amp-tastic,” chronicles her passion for horses through photographs of her experiences.

“All the time, I’ll just happen to get a cute picture of Charlie and I’ll post about how cute he is and how much I love him,” she said of her channel, which almost exclusively features photos of the Paint gelding.

But her Instagram account is much more than fan service for fellow Paint enthusiasts. It’s also the platform she uses as an ambassador for US Equestrian’s “Discover the Joy of Horse Sports” campaign — in which social-savvy ambassadors promote the reasons they love the sport. Needless to say, the star of Lily’s page, Charlie, tops her list.

Lily giving Charlie a pat while competing at their first show together.

Para-Goals
When asked about the future and whether the Para-Olympics might be on the docket, Lily burst out laughing. “The Para-Olympics would be a dream, but I’m not to that level yet and Charlie isn’t yet either.”

What she does plan on pursuing, however, is riding on a college team and one day becoming a para-equestrian trainer. “Even if I didn’t have the same disability as someone, I might be able to relate more with them,” she said.

But for now, she’ll simply enjoy the pleasures of riding and the exhilaration of advancing one step at a time because, amputee or not, horses are life for Lily Rhodes — and nothing can take that joy away from her.

The Lone Low-Level Ribbon in a Sea of Tri-Colors 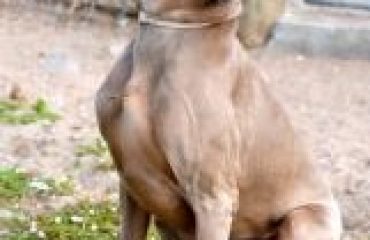 Dog of the Day: Hunter 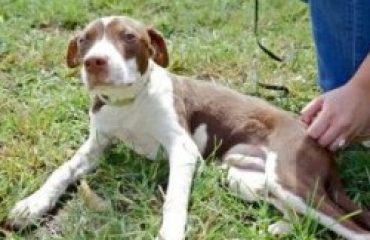 Dog of the Day – Diego