Susan and her Tiznow baby, Tiz A Knight.
Photo by horseswholove.com

Living in Southern California, once in awhile I cross paths with notable individuals. Like the time I saw Kobe Bryant at my fitness center working out. Another time I was shopping and I kept looking at a fellow shopper, a woman I was convinced I knew. I couldn’t quite place her, but she was so familiar. Was she a friend of a friend? Did she go to my church? Then I realized, “That’s Rita Wilson!” As soon as I made the connection, I remembered who her famous husband was, glanced at the tall man wearing a baseball cap and sunglasses standing next to her, and inwardly freaked out, “That’s Tom Hanks!”

I’m not the kind of person to go up to a celebrity and fawn all over him or her. I try to have appropriate boundaries to give them privacy as well as to protect myself from looking like a weird groupie. I had a celebrity encounter last spring that was more thrilling than Kobe, Rita and Tom. And I might have acted like a teenager, just a little. What made the celebrity encounter all the more sweet was knowing that we’re family. In a way. Let me back up several months.

Tiz My New Horse
When I bought my ex-racehorse Knight about a year ago, it was love at first (email) sight. I remember downloading his photo on my computer, and as it loaded slowly from bottom to top and the dark brown body began to fill in on the screen, followed by the adorable face with the white blaze, I was hooked. I knew his name was Tiz A Knight. I thought the name was cute, but that didn’t mean anything to me.

Somewhere in between meeting Knight the first time for my test ride and his pre-purchase exam, I discovered that he was sired by a celebrity! Knight’s dad is the famous Thoroughbred stallion Tiznow, winner of the Breeders’ Cup Classic back-to-back years in 2000 and 2001 (still the only horse to have won that race twice). I got the chills when I Googled “Tiznow” and realized he had a lengthy Wikipedia entry, not to mention a captivating documentary “Tiznow Wins It for America.” I saw the online image of the prominent dark bay with white on his face that was so similar to my own horse. The family resemblance was undeniable.

I did a little more Internet digging and discovered Tiznow, “the leading link of the sireline of the great Man O’War,” was standing at stud at WinStar Farm in Kentucky. Flash forward a few more months and thanks to Sidelines, I attended the Rolex Kentucky Three Day Event. Through a mutual connection, I made arrangements to visit the farm while in the area. I had a date to meet Knight’s famous dad! I had heard that people travel from all over the country to visit Tiznow and some write him letters while others bring him gifts. I was about to join the ranks of the super fans on my pilgrimage to see the prominent stud.

Tiznow, who lives at WinStar Farm in Kentucky, won the Breeders’ Cup Classic in 2000 and 2001.
Photo by Lee Thomas

Celebrity Stallion Meet and Greet
I journeyed to Bluegrass Country with the same level of anticipation Elvis fans have en route to Graceland. When I stepped into WinStar’s gorgeous stallion barn, bright rays of the sun streaming through the windows, my heart leaped. I saw Tiznow in his stall, and almost laughed aloud. He had the longest forelock, which was somewhat disheveled — the same forelock as my gelding Knight! And Tiznow’s stall demeanor was so normal, I was taken aback. I guess I figured he’d be standing regally in the center of his stall with a spotlight descending on him. The stallion was more or less just hanging out in the stall like any horse in any other barn across America. At one point he even began fluffing up his layers upon layers of straw.

“Do you want to feed him peppermints?” my WinStar host asked and I assented cheerfully, following her into the barn kitchen to get the candy. She introduced me to a few employees, saying that I owned a Tiznow gelding as a riding horse and that I had said he was the sweetest horse I had ever owned. The workers chuckled and one joked, “Are you sure Tiznow’s the sire?” Apparently he has kind of a reputation for being too smart and wanting to do things his own way. For example, they said when the jockey would try to use the whip on him, he’d intentionally go slower. Smart horse.

We walked up to his stall door again. Tiznow heard the crackling of the candy wrapper and was very alert, looking at me, the giver of treats. I don’t remember exactly what I said to him (I was a little starstruck) but something to the effect that he was very handsome and I asked if he wanted a treat. I held my hand out flat, and he carefully grabbed the peppermint and began to chew.
I gave him another mint but didn’t pet him even though I wanted to. I don’t have much stallion experience and based on what I’d heard of his personality, he was a bit intimidating.

Tiznow, the sire of Susan’s horse Tiz A Knight. The family resemblance is undeniable.
Photo by Lee Thomas

Like Father Like Son
While I ambled down the aisle gazing at other celebrity studs such as Distorted Humor, Take Charge Indy, and Gemologist, Larry McGinnis, WinStar’s Breeding Manager, stopped by. Larry has worked with Tiznow since the famous bay began his breeding career. He shared Tiznow stories like the time a mat accidentally got caught on the stud’s shoe and instead of panicking, he just stood still until he was freed. I shared Knight stories like the time he didn’t flinch when a news crew helicopter flew just a few hundred feet over our arena while we trotting around. Like father like son.

Larry asked if I knew the name of Knight’s dam. I gave it to him, indicating I would love to meet her some day (she lives in Kentucky at another breeding farm). Larry excused himself for several minutes and then returned with a piece of printer paper — a report containing the exact date and time of Knight’s conception! It was such a cool surprise my eyes misted and I hugged him. I remember thinking from a racing standpoint, Knight undoubtedly dashed many dreams as he was unable to live up to the speed and greatness of his sire, yet the twist in his story is that for me, the well-bred underachiever is the fulfillment of a dream. My mediocre ex-racehorse delights me whether in the crossties, on the trail or in the arena. Tiz a Knight makes me feel like I’m always in the winner’s circle.

Tiznow and I shared those simple moments together, me gawking at him and taking a few pictures just like a tourist in Los Angeles might do if she saw a star in public. One day I’ll have to return to Kentucky with my pictures and see if he’ll sign it with a Sharpie or put a big hoofprint next to his image. In all seriousness, the thrill of meeting Tiznow is a memory I’ll treasure for the rest of my life. But an even greater thrill than that is what he unknowingly gave to me — my sweet and smart dark bay gelding with the familiar white markings, Tiz A Knight.

About the writer: Susan Friedland-Smith, a middle school history teacher who has been horse-crazy since girlhood, lives in North Tustin, California, with her budding equestrian husband, golden retriever and Doberman. Knight, the ex-racehorse, has recently joined the family and is the main character of Susan’s blog Saddle Seeks Horse, which chronicles her amateur adventures of balancing a green rider hubby and green horse. Follow her blog at susanfriedlandsmith.com for all things OTTB or see what’s up on Twitter @SaddlSeeksHorse and Instagram @SaddleSeeksHorse . 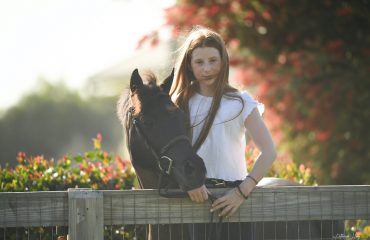 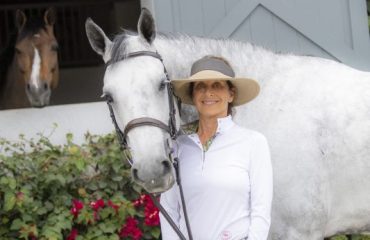 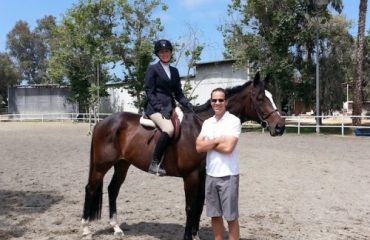