Karen Golding’s long career in the equestrian world began on a pony in England and took her across the pond to the United States, to life as a top groom and to five Olympic Games.

“I met Bernie Traurig in England and he invited me to the United States to work for him for six months,” Karen said. “I took a break from college and Karen Golding’s long career in the equestrian world began on a pony in England and took her across the pond to the United States, to life as a top groom and to five Olympic Games.never looked back. I was very lucky; Bernie taught me a lot and introduced me to many icons in the horse world: Bert de Nemethy, George Morris, Bill Steinkraus and members of the USET. Being a groom in the United States made me feel like I was somebody. In England I was one of many.”

Karen is the only groom to have been inducted into the Show Jumping Hall of Fame, a fact that still makes her proud. She worked for Jerry Baker and Michael Matz and had the honor of caring for Jet Run throughout Jet Run’s stellar career. Some of the other notable charges Karen cared for included Springdale, Grande, Mighty Ruler, Sandor, Chef, Rhum IV, Bon Retour, Heisman and Judgement.

In 2000, Karen became an FEI steward, working at Olympic and World Equestrian Games Selection Trials and serving as the Chief Steward at three different World Cup Finals. “Being an FEI steward keeps me in the sport I love,” Karen said.

Where did you grow up?

I was born in Wolverhampton, England, into a military family. We travelled every couple of years through the Far East and Europe. I now live in Wellington, Florida.

Of all the horses you took care of, who was your favorite?

My favorite would be Jet Run. I met him as a 3-year-old when Jimmy Kohn had him, and Bernie Traurig tried him. He was sold to Winter Place Farm; I went there a month later and the rest is history.

What are some of your memories of the Olympic Games?

The Montreal Olympics was my first Olympic Games and all disciplines were stabled together. The interaction was great. The Atlanta Olympics was good as we came away with a silver team medal in front of a home crowd. The London Olympics was the best ever — everything was top class and I was an official there.

What made you want to become an FEI steward?

I became a steward when Michael Matz turned to racing. I didn’t want to groom or barn manage for anyone else, yet I wanted to stay around the sport I loved. David Distler and Paul Weir of the FEI talked me into it as we needed FEI stewards for Atlanta. I enjoy being a steward, helping to educate people and observing and teaching things I’ve learned over the years.

Some of my craziest experiences included riding Grande in the ocean in La Baule, and just as Michael was telling me Grande liked to spook, he dumped me in the ocean. Then with Jet Run at the

World Championships in Aachen, he got down and rolled with his tack on in a peat moss stall.

Thank goodness for fellow grooms. Another funny one was I taught Sandor to bow by touching his left shoulder. Buddy Brown used to ride alongside Michael in prize giving and tap him there and, much to Michael’s chagrin, Sandor would bow.

The people in the horse world are my extended family, having lost both my parents and my brother.  My friends over the years are very important to me.

I really wanted to be a barrister (lawyer) in the courts.

I used to feel I’d love a week off and just relax. Unfortunately, I had to spend most of the year doing that, so a vacation would be to work!

I’m inspired by many people and their fight through adversity, from the child learning to ride a bike to the astronauts going into space.

“Be as you are” is my favorite phrase.

My visor — love a well-fitting visor.

My favorite meal is roast lamb.

It would be nice if at least once a day people would be kind to one another. 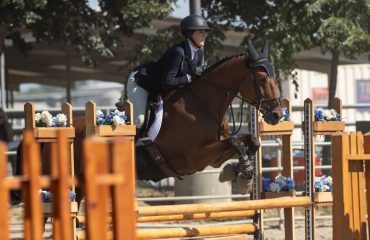 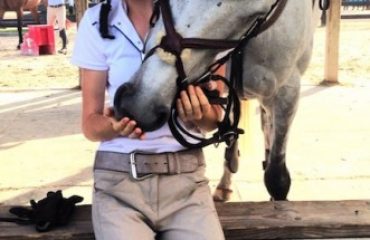 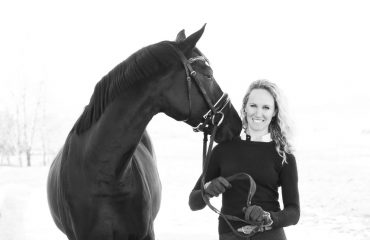