Remember how Danny changed after that first summer? My horse appears to be suffering from a mid-life crisis.  He did just turn ten, after all.  Seems to be in the midst of some sort of existential dilemma, I’m afraid.  Perhaps it’s an identity crisis?  He’s been a good guy for so long, maybe he’s just experimenting with the bad-boy persona.  Feeling his wild oats, literally.  I had a jumping lesson with Lindsay yesterday and all started out well.  We actually had some real lead change breakthroughs (!). We worked on counter-cantering, switching from outside to inside bend, and then we’d ask for the change just before the corner by pushing him out, stepping my weight to the outside and then asking lightly with my outside leg.  I missed a few at first, but once I got it, they were great — smooth, and relaxed, and clean.  Everyone’s always told me the counter-canter is a great tool for learning changes, but I feel like now it’s finally clicking for me.  Then we started jumping, and things started off fine while we were working on some single verticals on a circle.  Then Tucker’s turnout buddy left the ring, which shouldn’t be that much of a crisis, unless you a big fresh horse looking for a good excuse.  He was clearly tense, but thus far behaving (other than squealing — which I could always do without), and I figured he’d get over it in a minute. When we added another vertical on the diagonal, landing with a sharp left turn, Tucker was a bit strong — pulling me to the jump on the last stride, then grabbing the bit and rooting the reins on landing.  Still rideable, but less than pretty.  Then we added another vertical on the diagonal, off the short turn, going toward home, and all hell broke loose.  Tucker apparently mistook that vertical for the starting gate at Belmont Park, so we landed going Mach 10.  (Not exactly the stuff that winning hunter rounds are made of). 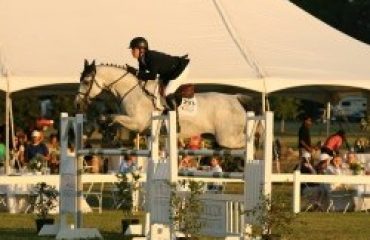 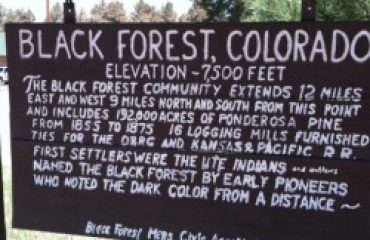 Colorado Trip Included A Sad Visit to the Black Forest