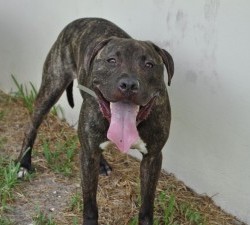 Tuesday, September 18 2012 by Editor
by Marti Hohmann CPDT-KA Hercules is a 2-year-old, neutered male Plott Hound mix. He is a big, beefy guy with loads of charm and personality. He also has the biggest tongue I have ever seen, and it looks like this photo was taken after exercise that made him tremendously happy.
Tagged under: bridge-farms, entries, farms, hatchaway-bridge-farms, tails & trails, the-barn-book, wordpress-org 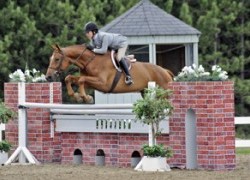 Tuesday, September 18 2012 by Editor
Darcy Hayes of Aurora, ON, plans to compete with the Canadian-bred horse, In Your Dreams 3E, at this year’s Canadian Show Jumping Tournament from September 19 to 23 at the Caledon Equestrian Park in Palgrave, ON. Photo by ShootPhoto.ca Palgrave , Ontario – The best riders from across the country will go head-to-head during this year’s Canadian Show Jumping Tournament, running September 19 to 23 at the CaledonEquestrian Park in Palgrave, ON.  Whether it’s in the Hunter, Jumper or Equitation rings, the athletes and their four-legged stars of the sport are sure to shine. Sanctioned by the International Equestrian Federation (FEI), the CSI2* Canadian Show Jumping Tournament features the $100,000 Caledon Cup, sponsored by Aviva Elite, Peel Maryborough, and RAM Equestrian.  Comprised of three legs of competition held over three days, the $100,000 Caledon Cup is often referred to as the ‘triple crown of Canadian show jumping.’  Two-time Olympic course designer Leopoldo Palacios of Venezuela will set the tracks in the grand prix ring.
Tagged under: bridge-farms, darcy hayes, entries, farms, hatchaway-bridge-farms, show jumping tournament, the-barn-book, wordpress-org 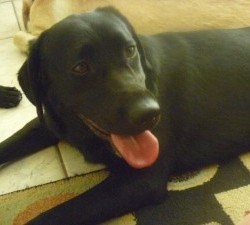 Tuesday, September 18 2012 by Editor
by Marti Hohmann CPDT-KA This highly skilled, obedient Labrador Retriever is available for placement to a certified service dog home only. She is 28 months old, and has 18 months of obedience training under her belt, plus six months of service dog specialized task training as well. Serious inquiries only.
Tagged under: bridge-farms, entries, farms, hatchaway-bridge-farms, service dog training, tails & trails, the-barn-book, wordpress-org 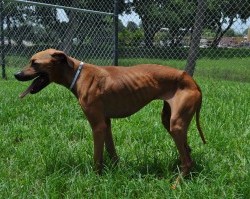 Monday, September 17 2012 by Editor
by Marti Hohmann CPDT-KA Tinkerbell, a beautiful spayed and housetrained adult Hound mix, is being treated for possible ringworm at Animal Care & Control. They have a great foster home lined up for when her skin issue clears up, but nowhere to put her until then. The clinic staff is pressuring the adoption folks to make a decision.  Someone with a barn area or separate kennel would work well.
Tagged under: bridge-farms, entries, farms, hatchaway-bridge-farms, tails & trails, the-barn-book, wordpress-org 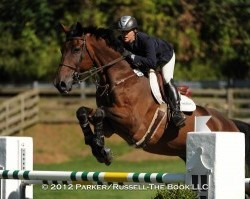 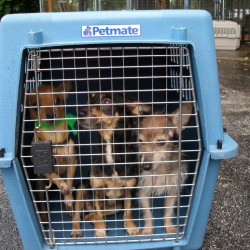 Sunday, September 16 2012 by Editor
Rescues on their way to their new home at Tri County Humane Society Ah Chihuahua! Tri-County Humane Society is the new home for 55 mostly Chihuahuas that had been rescued from kill shelters by another non-kill shelter that was no longer able to care for them and will be looking for someone to adopt them to their “forever home”.
Tagged under: bridge-farms, entries, farms, hatchaway-bridge-farms, tails & trails, the-barn-book, wordpress-org 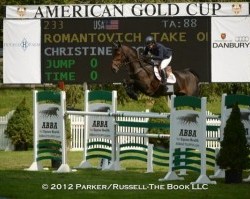 Sunday, September 16 2012 by Editor
Christine McCrea and Romantovich Take One win The American Gold Cup Qualifier North Salem, NY-September 14, 2012 -Christine McCrea jumped ahead of the competition Friday to place first in the $50,000 American Gold Cup Qualifier at the picturesque Old Salem Farm in North Salem, NY. The day was clear and warm to welcome the 50 entrants to the final class of the day on the spectacular grass Grand Prix field. Six entries went clear and headed to the jump-off.  McCrea had the winning time with 40.830 seconds aboard Romantovich Take One owned by Candy Tribble.
Tagged under: bridge-farms, farms, hatchaway-bridge-farms, reed kessler, salem farm, show world, the-barn-book, wordpress-org 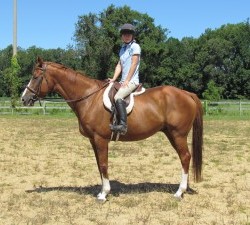 Goffin Around available via ReRun Inc

Friday, September 14 2012 by Editor
Lisa Molloy/ReRun   Following up rather quickly on my last post earlier this week due to the overwhelming response and subsequent adoption of Libertarian. ReRun is proud to present for adoption the rather lovely and always charming Goffin Around!   Typically when prospective adopters contact me, they already have a mental image of how their new horse will look and behave; flashy with chrome – check, got it! How about substantial build, almost like a warmblood
Tagged under: bridge-farms, entries, farms, hatchaway-bridge-farms, tails & trails, the-barn-book, wordpress-org 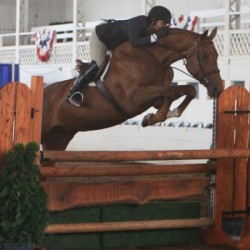