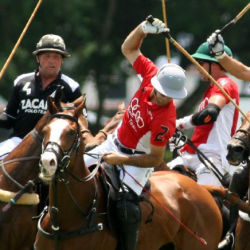 Wednesday, April 17 2013 by Editor
WELLINGTON, FL-April 14, 2013—Audi, given new life when Coca-Cola eliminated Zorzal, went down fighting Sunday in the quarterfinals of the 109th Maserati U.S. Open in front of a packed crowd at Isla Carroll East.   Leading 5-2 early in the third chukker, Audi lost its momentum in the fourth chukker and was unable to regain its composure ending its rollercoaster season at the hands of defending U.S
Tagged under: between the ears, classical, education, ganzi, higher education, marc-ganzi, pony tales, sidelines-magazine, tucker the wunderkind