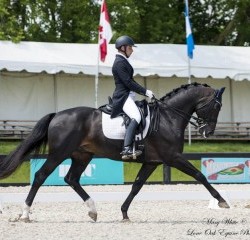 Monday, June 17 2013 by Editor
Rockwood, Ontario – Canadian Olympian David Marcus of Campbellville, ON, made a clean sweep of the grand prix division at the CDI3* Angelstone International Dressage Tournament held June 14 through 16 in Rockwood, ON.  Riding his 2012 London Olympic mount, Chrevi’s Capital, Marcus won both the Grand Prix and the Grand Prix Freestyle while Don Kontes stood in the winner’s circle following the Grand Prix Special.   Marcus and Chrevi’s Capital topped a nine-horse starting field with a score of 69.81% earned from the five-member panel of international judges.  Riding Don Kontes, Marcus took third place with a score of 66.62%, finishing behind his 2012 London Olympic teammate Jacqueline Brooks and D Niro who scored 67.51%.  Both of Marcus’s horses are owned by Deborah Kinzinger.   “Capital hasn’t shown since February, so it was nice to get him back in the show ring,” said Marcus, 32.  “He felt fresh and happy in his job.  It was a nice, clean test.  It was fairly conservative, but since he hadn’t shown in a while, my goal was simply to go in and have no mistakes.”   Both the Grand Prix Special and Grand Prix Freestyle were held on Saturday evening in front of hundreds of spectators.  Marcus and Chrevi’s Capital, a 13-year-old Danish Warmblood gelding (Chrevi’s Cavallo x Weinberg), rode their musical freestyle for the third time in competition, having debuted their new program at the prestigious CDI5* World Dressage Masters Palm Beach in January.  Compiled by Joost Peters of The Netherlands and featuring the music of George Michael and WHAM!, their freestyle performance earned the winning score of 72.73% to hold off Brooks and D Niro with 72.33%
Tagged under: 2012 london olympic, between the ears, david marcus, education, grand prix, grand prix special, london, olympic sidelines, sidelines-magazine, swedish, weather