Wellington High School senior Erica Brant is one determined young lady.  Perhaps it’s the fact that Erica was born with Cerebral Palsy that makes her fight a little harder than others, or maybe Erica is just one of those people who believes anything is possible if you work hard and aren’t afraid to ask for help.  Thanks to Erica’s belief that there are people out there willing to lend a hand, she now owns a horse, has set lofty goals and is rubbing shoulders with some big names in the equestrian community including Robert Dover, Georgina Bloomberg, Bethany Peslar, Laura Quin, the folks at Pure Thoughts Rescue and the list goes on.

“I sent out an email telling my story and asking for help,” Erica said. “I was expecting to find a couple local people who might be willing to help with a little here and there, but I got much more.  It was really amazing to get an email from Robert Dover telling me that he put my letter on the front page of his blog.  I got three emails that day from people telling me that they saw it and wanted to help.  One of my sponsors is currently living in Germany and training with Anky Van Grunsven.  I can’t believe people that far away have heard about me.”

Erica was born with Cerebral Palsy, which not only affected her ability to walk but her ability to play sports.  She said she had a hard time finding an activity to take part in when she was younger, until she started taking riding lessons at Vinceremos Therapeutic Riding Center.  “On a daily basis, my balance is affected a bit, and sometimes I trip and fall, especially if there’s nothing around to grab onto and catch myself,” Erica said.  “I used to use a walker for balance, but starting my junior year of high school I chose to go without it.  I haven’t used it since.  On a horse, the only major problem I have is staying loosened up.  My leg muscles are always tight, especially in a Dressage saddle.  It usually takes me anywhere from 10 to 20 minutes to feel comfortable after I get on.  After that I can pretty much ride normally, although I have a little less leg strength than the average rider.”

Erica and Polly, a Thoroughbred Erica adopted from Pure Thoughts. Photo by www.PerryPhotoPics.com

Erica decided last year that she wanted a horse or her own and that she wanted to pursue a career in Para-Dressage.  Erica contacted Jennifer Swanson and Brad Gaver at Pure Thoughts Horse Rescue in Wellington and told them what she wanted.  “I had more than a few confidence issues because the last two ponies I had been riding ran away with me, so I wanted something lazy.  As soon as I said that, Brad suggested giving Polly’s Vision a try.  She was gorgeous and at 15.2 hands she wasn’t intimidating but she wasn’t too small for me either.  It wasn’t exactly love at first sight as she did have energy, but I rode her at Pure Thoughts for several weeks and as we got used to each other it was a perfect fit.”

While some riders may have been fazed by the fact that Polly was a three-year-old Thoroughbred at the time, Erica proceeded with her usual belief that if she worked hard everything would turn out fine.  “Polly was rescued from a kill auction.  She was literally pulled off a slaughter truck just a few months after she turned three,” Erica said.  “To know that such a loving horse might not have had a chance to live her life is a sad thing to think about.  Polly is so special to me because I feel like we’re helping each other.  Polly is being well taken care of and I really spoil her.  And at the same time, she’s boosting my confidence every ride and giving me a chance to go for my dreams.”

Only riders with permanent, measurable disabilities are eligible to compete in Para-Dressage, and Erica qualifies.  “I have a long-term goal of qualifying for the Paralympic Games.  My goal right now, however, is to get Polly and myself ready to start competing in Para-Dressage classes by the 2012 winter season.  I have high expectations, but I’m not setting a time limit to reach them.  I’ve always liked the concept of the Paralympics, and how the organization has done its best to level the playing field.  I love that the Paralympic Games are held at the same venue as the Olympics, because it really shows how disabled riders have just as much chance to compete as able bodied riders do.”

Erica said she once read that the kind of horse needed for a Para rider is a horse with common sense.  “Polly is definitely a horse like that.  She has spooked before, but when she does she jumps to the side and right when I think she’s going to run, she relaxes and keeps doing whatever we were doing before.  I’d like to think she knows she has a job to keep me safe, and she sure does a great job of that.”

Erica said she would love to have the satisfaction of competing on her rescued Thoroughbred in the Paralympic Games.  “Right now the possibilities are endless.  If Polly’s the horse that I’m supposed to compete on, then it will happen that way.  If not, I think the two of us will continue to go far together until then.”

Training and boarding costs are extremely high in the Wellington area, which is what inspired Erica to send out an email asking for help in raising money.  Little did Erica know that she would have many angels willing to watch over her, including Laura Quin, the owner of Hampton Meadows Farm in White Fences.  “I had met Laura in 2009 and knew she had a lot of contacts so I sent her an email,” Erica said.  “That was probably the best move I could’ve made.  Laura not only donated a Dressage saddle, bridle and other tack, but she invited me to bring Polly to her farm to train. Laura has cut our costs to way less than half of what they would have been and has been a huge help in finding sponsors to cover Polly’s hay and grain.”

Erica said many people have stepped up and offered one-time donations and several people are offering monthly support.  “Georgina Bloomberg, who has always supported my goals, is one of my monthly sponsors, along with Alexandra Duncan who is also working on her dressage training in Germany.  Pure Thoughts Horse Rescue is also providing us with a sponsorship.  We have also been fortunate enough to have all our hay provided at no cost by Dale and Debbie of Blue Monkey Hay and Heather Gavitt of Cyclone Hay.”

One of Erica’s biggest surprises, however, came from dressage rider and trainer Bethany Peslar of Everglades Dressage in Wellington.  When Bethany heard about Erica’s dreams, she contacted the aspiring Olympian and offered her free lessons.  “Training with Bethany has been amazing, and she is playing a huge part in the progress Polly and I are making.  The fact that a rider and trainer of that level would be willing to give me weekly lessons at no cost is a huge deal to me,” Erica said.  “She has really given me a lot of different tools to be able to work through different challenges that Polly and I come across and my riding has really improved.  I love that Bethany is always so patient with me.  It takes time at the beginning of the lesson for me to loosen up and work out of being so stiff, but she never counts that time as part of the one-hour lesson.  Whenever I get frustrated, Bethany calmly works through it and we keep progressing.  I’ve never had the money to be able to train with a higher level trainer like that, and the difference between a less expensive lesson and one of hers is just amazing.”

Erica said that whenever she thinks of all the people who are currently helping her, she hopes that if she is ever in the same situation she will be just as generous.  Whether she realizes it or not, Erica’s long-range goals will have her doing just that – helping others.  “I’ve always had a goal of starting my own therapeutic riding center, one specifically for physically disabled riders.  After reaching my goal of competing in the Paralympics, how cool would it be if other handicapped riders could get their start from someone who has worked to reach the top of the sport?  My hope for the future is that I can show other disabled riders that they can go on to compete in an equestrian sport and do it well.  All the experiences that I’ve had, and will continue to have in this chapter of my life, good or bad, will give me the tools to help future Para-Dressage riders succeed in achieving their own  dreams.” 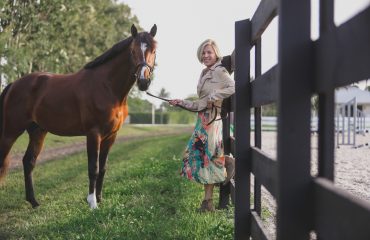 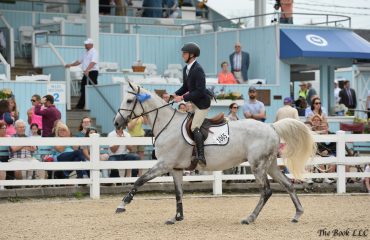