Three years ago, a bearded man in a nude leotard and platinum blond Cleopatra wig high-kicked, twirled and did the splits to a Sia song in his bedroom with a white miniature horse joining in the dance. The video clip of Jake Nodar and Tyrion — Jake’s white “unicorn” — went viral, airing on both TMZ and Fox News, and later a Danish company used it in an internet commercial.

Whether dressing in formal wear or a crazy outfit, Jake’s social media presence is quirky, fun and meant to put a smile on his followers’ faces.

Jake, a professional horse trainer from Maryland, successfully balances careers as both an entertainer and horseman. He has starred on several reality television shows over the last decade, ranging from Discovery Channel’s “Naked and Afraid” series and “Out of the Wild: The Alaska Experiment” to the History Channel’s “Full Metal Jousting,” a show that resurrected lance-wielding knights on horseback. He also recently directed, choreographed and danced in Grammy-winning artist Zac Brown’s music video “Swayze,” which playfully gives a nod to 1980s workout videos.

Horses figure prominently on Jake’s Instagram feed, just like they did in his drawings as a child after he first met them across the fence near his home. However, there’s nothing traditional about Jake’s equestrian account. His posts are the 21st century version of the Sunday funnies with hilarious captions, unexpected visual humor and the hashtag #blessed. From roller-skating in a mullet wig and playing in a kiddie pool with Tyrion to running around an indoor arena in an inflatable Santa suit jumping crossrails or sporting a rainbow cape and helmet in celebration of Pride Month, Jake’s social media presence is quirky, fun and meant to put a smile on his followers’ faces.

“I get so much joy out of the response from my followers,” Jake said. “I get to be absolutely ridiculous and it’s amazing the response that I get.” People frequently message Jake to tell him they’re going through a tough time and they specifically go to his page to be uplifted.

“I started using the hashtag #blessed mostly as a joke,” he said. “I would see social media models and influencers posting ridiculous photos of themselves, scantily clad while promoting the latest detox tea or workout program. The posts almost always included #blessed. I started using it on all my posts, especially the non-glamorous ones like ‘covered in manure #blessed,’ or ‘just lost 39 pounds starving in a jungle #blessed.’ I have used #blessed jokingly for years, perhaps as a way of letting people know I don’t take myself too seriously.”

Jake and Tyrion, his white “unicorn,” appears in many of Jake’s photos and videos.

Much of Jake’s early equestrian education came from learning by doing. “I would ride back then and try not to fall,” he said. “I would read books and watch training videos — to say my riding was rough around the edges would be an understatement.”

His aunt had horses and Jake began riding around the age of 14 when he had the opportunity. Near the end of his high school years, his family traded in city life for a five-acre farm, and that’s when his passion took off. Jake’s first steed was purchased at an auction. He enthusiastically hopped on the horse in the auction pen and it flew into a gallop. Jake said he just knew, “This is the one!”

A career in horses blossomed when he began volunteering at a horse rescue near his home, which turned into a barn manager position. Jake dove right in, taking care of 45 to 60 horses, several of them in critical care situations. The long hours and serious role was demanding, but periodically he played around with the horses after the work day. “I fell in love with them — seeing how forgiving these animals could be.”

Jake loves to entertain, and that shows up in his social media posts which also end with #BlessedLife.

In order to pursue a more formal equestrian education, in 1999, Jake attended John Lyons’ training program in Colorado. During that year, Jake was in the saddle eight to 10 hours a day, starting with basic round-pen work that led eventually to tempi changes and passage. Josh Lyons, John’s son, was Jake’s primary instructor and remains Jake’s equestrian role model to this day. “He’s such an incredible horseman; I love his way with horses,” Jake said.

Returning home to the East Coast, Jake worked for a while at a hunter barn, but the adrenalin of eventing was more his style. Jake became a working student and gave lessons at Stephen Bradley’s eventing farm based at the time out of Hickory Tree Farms in Middleburg, Virginia.

“I liked Stephen’s way of teaching and was a working student for him, riding everything from just-broke 3-year-olds to three-star horses,” Jake said. “It was incredible.”

Jake leaped wholeheartedly into eventing with a horse of his own. “I had a lovely Dutch gelding with a goofy personality,” he said. “He would clean up in dressage, but wasn’t brave at jumping preliminary fences.” Jake sold him to a dressage home and that was the end of his time eventing.

Jake has used #blessed jokingly for years as a way of letting people know he doesn’t take himself too seriously. He does take horse training seriously, however, and his clients can attest to his training skills and love for the horses.

A chance encounter in an online hiking forum led Jake to the world of reality TV survival shows. As an outdoor enthusiast, Jake would plan annual adventure trips such as a solo bike ride from Florida to California or camping with the Maasai people in Kenya. While researching a trip to Mongolia, a vague description for an Alaskan adventure caught his attention. After an email inquiry, phone call from a casting company and an overnight delivery of an audition video, Jake landed a spot on a new show, Discovery Channel’s “Out of the Wild: The Alaska Experiment,” which aired in 2009.

“The show gave us a three-day course on survival and two days of navigation training,” Jake said. Just like his early days as a horseman, Jake learned survival skills as he went along in the wilderness, although he had a foundation due to his family’s interest in the outdoors. “My dad has always been big into the outdoors: camping, fishing, hiking and leaving the city. My brothers and I would make our own flies for fly fishing. So I’m very comfortable in the outdoors.”

Following his first survival show, Jake and 15 other horsemen from across the country battled with knight’s armor and lances in the History Channel’s “Full Metal Jousting.” One hundred riders from all disciplines auditioned and Jake was one of the finalists selected.

“My first impression was Jake was a very serious person because he can be all business,” said James Fairclough, fellow jouster and professional show jumper. “But he’s one of the funniest people I’ve ever met, and an incredible rider. When he wants to have fun, it’s like a light switch turns on.”

Although Jake was considered the show’s underdog, in the first round of competition he knocked a veteran dinner theater jouster to the ground in defeat. “I’m glad I got to experience jousting,” he said. “I do love trying any sport involving horses, but will be perfectly happy if I never have to don the 85 pounds of armor again.

“I was the last one chosen when teams were picked, and was pegged as the weakest link,” he continued, “but I showed them just how fierce I could be. I unhorsed my competitor, an 11-year jousting professional, and won my preliminary match, and then took out my friend, James, in the quarterfinals, advancing me to the semifinals. I was unhorsed twice during the semifinals, and that was my brief but successful jousting career.”

Next, Jake appeared on several versions of the “Naked and Afraid” series, a show in which he had to survive in the wild for 21 days with no food, no water, no clothing and only one survival tool. In the Amazon Rainforest, Jake lost almost 40 pounds and had to survive by eating unthinkable living things including a tarantula and grubs. While shooting in South Africa for Season Two of “Naked and Afraid XL,” Jake and a team of 11 other alumni from the show faced starvation and the most dangerous wildlife on earth. Jake had to leave the show before the 40 days was up after eating fruit contaminated by monkey or bat urine: His eyes turned yellow and his liver started shutting down. Jake spent eight days in an African hospital followed by three months at home recuperating.

Even in the most dire of circumstances in the wilderness, Jake’s humor, grit and positivity shined through — qualities that have served him well in his training of both horses and their owners.

With his varied background in hunters, eventing and starting young horses, today Jake trains his clients in what he calls “a cornucopia of disciplines.” Long-time client Dana Winslow said Jake’s influence has transformed her relationship with her young dressage horses.

“Jake believes you should always treat your horse as you would treat your best friend,” Dana said. “With this attitude, as training evolves, your horse actually does become your best friend. My filly is sweet but I simply was horrified and a little afraid when I started lunging her on my own. I had difficulty controlling her exuberance. Jake took over and training returned to the fun it should be. He knew just what needed to be done to control the ‘airs above the ground’ and they became a humorous challenge to address instead of a danger to life and limb.”

With a gift for training horses, Jake found it difficult to hang on to one of his own for very long (they sold quickly), so that desire to have a horse of his own led him to the world of minis. First he bought his white stallion, Tyrion, then later a brown miniature mare named Baroness In The Buff. “Having been naked on television, her name sealed the deal. Her barn name is Buffy,” Jake said.

When asked if he ever considered pursuing a full-time career in entertainment, Jake said he would miss horses too much. He appreciates being able to have a foot in both worlds. In 2020, there are some changes on the horizon for Jake as he plans to relocate to Georgia with his miniature horses to “start up a tiny farm with tiny animals.”

One of Jake’s favorite quotes from John Lyons summarizes his view on training horses. “John said something along the lines of, ‘There are only two emotions that belong in the saddle: patience and a sense of humor.’” It’s evident that Jake Nodar possesses both in spades. “At the end of the day,” he concluded, “I really do live an incredibly #blessed life.” 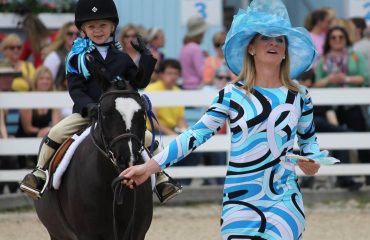 Love on a Leadline: Years Past 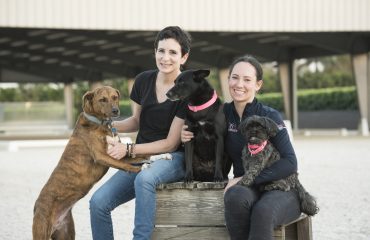 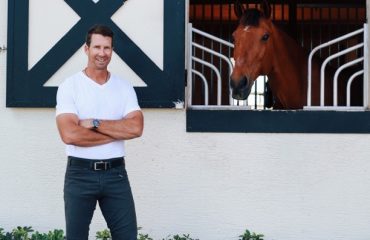