Joanna and her 20-year-old OTTB Baby B Free, aka Frankie. Photo by Albertex Photography

When it came time for artist Joanna Zeller Quentin and her husband to come up with a name for the studio they planned to share, finding a great name proved difficult. “Moose Pants Studio was born out of desperation. Everything that we thought of that was really cool and wonderful and unique was already taken,” Joanna said. “We made a pledge that the first name we came up with that wasn’t already taken would be our studio name, no matter how peculiar it seemed.”

So how did they come up with Moose Pants? “My mother mailed our Christmas presents, and included a matching pair of adorable flannel pajama pants for each of us with a moose print on them,” Joanna said. “Strangely enough, no one had thought of naming their business Moose Pants, so voila!”

After her husband started his own studio, Joanna elected to keep the name. “How could I not?” she teased. “My studio’s name, rather than my art, is often the first question I get asked about,” joked the 39-year-old artist who is based in Dallas, Texas. In all seriousness, the art that Joanna exhibits and sells comes from a love of color, motion, and energy.

“I love to get into a painting and see the marks — the pencil lines, the slap of the brush and the thick application of the paint, the way a hidden color comes to the surface at just the right moment. I live for that,” Joanna said. Among other activities, she’s currently working on commissions, creating original artwork for the galleries that represent her, and experimenting with new subject matter.

In addition to her colorful paintings, Joanna is also known for her highly detailed and dramatic scratchboards. Created using only an Xacto knife, scratchboard involves hours of detailed work scratching away the black surface of the board to display the white clay layer underneath. While it may seem a strange fit next to the exuberant color, Joanna enjoys the soothing meticulous zen work of scratchboard and says that switching back and forth between the two mediums creates a happy artistic balance.

Joanna grew up outside of Chicago, Illnois, in Naperville. Both of her parents are educators. “No one in my family had anything to do with horses,” she said. “But I loved to draw and write from a very early age, and I was absolutely obsessed with horses from the beginning. I was drawing horses and birds from the start,” she said. “My parents used to read to me at night before bed, and I remember how fascinating and magical the book illustrations were that accompanied the stories. I’d been a big fan of Disney and Warner Brothers cartoons, and when I saw Aladdin, I was hooked.”

Joanna’s early interest in drawing horses led her to reading about and eventually riding them. “I was and still am, a voracious reader,” she said. “My mother agreed to let me take riding lessons in the third grade if I could get an A in math class for the semester. To this day, I think that’s the only A in math I’ve ever received. But she was as good as her word, and I started riding equitation and hunters and later jumpers at a barn in Naperville.”

With the goal of becoming a Disney animator, Joanna selected Ringling College of Art and Design because of their strong background in this area. However, while there, she made the decision to change her focus to illustration and equestrian commission work and graduated with a BFA in illustration.

“When I went to college, I continued riding, usually working with owners who didn’t have time to ride their horses or trainers who were willing to trade ride time for barn help,” Joanna said. Finally, she bought her first horse at the age of 33. Joanna is now a working artist, printmaker, a five-time-per-week rider, an art printing/media consultant and a violinist. She and her husband own four dogs, two cats, a parrot and an off-the-track Thoroughbred jumper named Frankie.

Lightrider, 16 x 20, oil and mixed media on board, an homage to one of Joanna’s childhood show jumping heroes — Margie Engle and Daydream.

Joanna said she has been influenced by artists who have come before. “I think Rembrandt is perhaps the greatest artist of all time,” she said. She’s also grateful to artists working today who have guided, encouraged and reassured her on her journey such as Lyn St. Clair, Lesley Humphrey, Mary Gilkerson, Kim Santini, Julie Chapman and author Anne Rice.

In the future, Joanna would like to refine and expand her art. “I want to create paintings that are bursting with life and vitality and rich, exuberant color, and yet are real enough to show the important things like anatomy, personality, etc.” she said. “Ultimately, I want to create artwork that speaks to the experience of people who love or ride or are drawn to horses.” 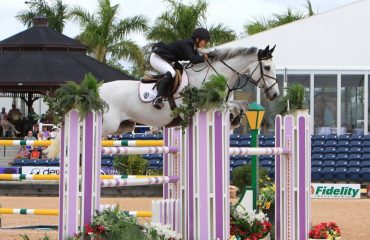 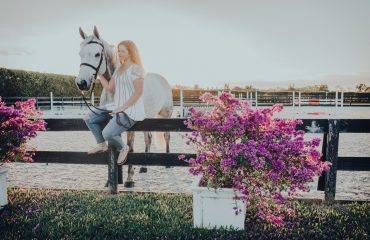 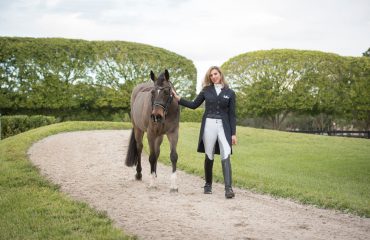