It has been said that those who dare to teach must never cease to learn, and dressage rider and instructor Kim McGrath will never stop learning. As Kim leads a successful career in the Grand Prix arena and manages her Sunset Hills Farm training operation in Redlands, California, she will never forget the special horses and trainers who brought her to this point.

Growing up, Kim was in awe over the horses she saw grazing on her neighbor’s property, but the first horses her parents brought home came in the form of plastic Barbie toys. “I had the entire Barbie horse collection, including the pink truck and horse trailer,” Kim said. Though they kept Kim entertained for a few years, she eventually grew eager to ride real horses, and it was time for an upgrade.

At 11 years old, Kim’s friend invited her to take riding lessons at a local ranch near her home in Redlands. “I loved every minute of it,” Kim said. “Eventually, in group lessons, I remember being asked to get off the horses I was riding and get on other kids’ horses and school them. It’s fitting that I grew up to be a horse trainer!”

After taking lessons for some time, Kim was presented with the opportunity to acquire Macho, a 14.2-hand Quarter Horse who lived at the farm. “The owners had become behind in their board payments, and the farm owner told me about him,” Kim said. “I brought my dad out to see Macho, with his swayback and fat leg, and I remember my dad saying, ’Are you sure you don’t want to shop around first?’ I said, ‘I’m sure!’”

Macho became Kim’s very own horse for $300 with a stubborn determination. Though he bucked her off on a frequent basis, he kept Kim entertained from morning till dark every day in the summer.

With Macho approaching his well-deserved retirement and Kim approaching 5-foot-10 at just 13 years old, Kim acquired a 3-year-old off-track Thoroughbred she found in a Horse Trader advertisement. “He taught me to love the process of training a green horse,” Kim said.

“When we brought him home, he only knew how to go really fast to the left.” Through his development, Kim became familiar with the dressage training scale, teaching him the basics before instituting his dressage training. “He knew one thing when I bought him—how to race—and it was fun to teach him first to just be a solid riding horse and then a dressage horse.”

As Kim was pulled deeper into the dressage world, she was offered the opportunity to lease an FEI horse to try for the North American Youth Championships. “The highest I’d shown was First Level Test 1, so I had no business leasing that horse, but I didn’t realize that yet. I told my mom I could do it, but I’d just never had the opportunity to try,” she said.

“In my first show with him, the horse faked every change in our tempi lines. He would hop up and pretend to change but stay on the same lead!” Kim laughed. “When I got out of the ring, my trainer asked me what happened in the changes, but I thought I nailed them! I went back to my mom and confessed that I had no clue how to ride, but I wanted to learn.”

Though Kim didn’t make the Young Riders team, riding a schoolmaster inspired her with the opportunity to learn what upper-level movements felt like, so she could better train young horses—like her Trakehner mare, Zanaret.

Throughout Kim’s life and training career, there have been many willing to lend a hand (or hoof) to her dressage education, and Zanaret is one horse who shaped Kim into the rider she is today. “After my OTTB, my parents purchased a 3-year-old Trakehner mare for me. She was my dream horse—dark brown with four white socks,” Kim said. “Zana was hot and put me through a lot, but she taught me to be an honest rider because she wouldn’t put up with anything else!”

Zanaret’s hot personality taught Kim how to ride sensitive horses and leave her fear at home. “At the end of the day she was very safe and would always protect me,” Kim said. “She never competed above Intermediate I, but I trained her to Grand Prix at home. She taught me a lot about how to train and keep horses sound at that level—she always gave 110% in her work, and that was so fun to ride, but hard on her body,” Kim said.

While Kim trained Zanaret through the levels, she was mentored by accomplished trainer Jo Moran. Having previously believed good dressage training could only come from a serious and strict training environment, Kim felt working with Jo was a breath of fresh air. “Jo showed me you could be just as serious, if not more serious, about your riding and goals, and have a ton of fun all the time too!” This “Focused Fun” atmosphere is something Kim carried with her as she built up her own training business during college.

As Kim comes from a med school family, with both of her parents and siblings being physicians, she’d already considered herself the black sheep of the family when she wanted to go to law school, let alone become a horse trainer with an unfinished degree. “I went to University of California Riverside to study political science, but I could never stop thinking about riding,” Kim said. “I had a full barn of training horses and I couldn’t sit in a classroom for a single day more.”

Without an ounce of regret about not finishing, Kim marched confidently forward into her professional career, developing her business out of Redlands’ cherished Sunset Hills Farm. “I’ve been at this farm for 16 years. It’s been in operation for many decades and is actually protected by the city and cannot be developed,” Kim explained. “I love the quiet environment, and I’m the first to admit that I’m quite spoiled here. It’s the perfect place for me to thrive, with a fantastic owner.”

A Bright Future and Family

Training out of her own paradise, Kim stays in Redlands year-round but is looking to begin traveling to Florida in the future, “I have some amazing horses right now and some fantastic young horses coming up, with some incredibly supportive and wonderful sponsors,” Kim said. One horse in particular, Zanaret’s son, Brighton, is competing at Grand Prix—a full circle experience for Kim.

Since training young horses and teaching others is a staple in Kim’s program, she values the help of fellow trainer Bert Rutten. “He is an absolute genius and I hang on every word he says. There is no type of horse he hasn’t ridden or seen,” Kim says. “Because of COVID, I haven’t worked with him since last year, but I try to hear him in my head while riding all the time.”

Kim’s supporters don’t end in the barn—she has a loving husband, Jake, and her children who cheer her on every day. “Jake has never made me feel guilty for sharing my love with my horses and my sport, and my children have observed this and give me the same support and encouragement,” Kim said. Though free time is hard to come by, she enjoys spending time outside of the barn with her family—they keep her grounded when the going gets tough.

“I think a lot of professional riders dream the same dream,” Kim said. “I would love to have a Team horse someday, and I will die trying. If I don’t get there, I know it won’t be from lack of effort. That being said, I absolutely love training horses and riders. If you told me I could never compete again, part of my heart would shrivel up, but I wouldn’t change anything I’m doing. I really love my job, and love helping horses and helping riders reach their goals.” 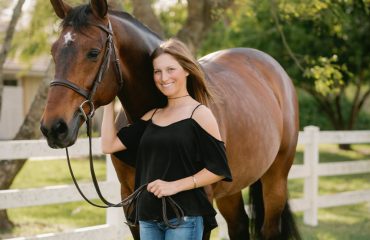 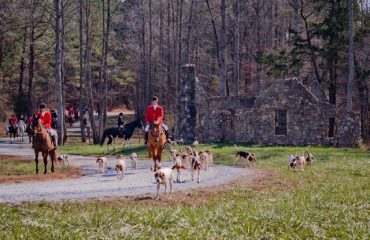