If you notice James Fairclough II walking around the show grounds at the Winter Equestrian Festival, or near his barn in the Hamptons, don’t be deceived by his gentle appearance.  If there’s one thing that lies underneath James’s schoolboy good looks and slight frame is that fact that he is tough!  If you see him schooling his students in the show ring and he seems like a nice guy – he really is a nice guy — but don’t forget that he is also tough!

So tough, in fact, that James beat out riders from all over the country to be part of the History® Channel’s reality show “Full Metal Jousting.” According to the History® Channel, the show featured 16 of the toughest warriors in the country facing off in bone-crushing competition in a 10 part series of full-contact jousts with competitors going head-to-head on horseback in brutal tests of strength, endurance and courage with the last man standing taking home $100,000.  While that sentence may be a mouthful – actually it is, uh, tough to say — it also seems obvious that only guys with nerves of steel could compete in something described as “bone-crushing,” “brutal” and “full-contact.”  While he may have nerves of steel, he also has excellent equitation and James made the equestrian world smile when his coaches on the reality show described him as the best rider of all the jousters.  (Check out James’s jumping photo to see what they were talking about!)

If you happened to catch the first few episodes of “Full Metal Jousting” and saw clips of James covered in blood, you may have paused and thought, “That man is a little crazy, too!”  Sidelines caught up with James after the show had finished taping to find out what it was like to revive the world’s original extreme sport.  At this point we don’t know how James fared on the reality show, the only thing we know for certain is that he spoke to us, so we assume he came out of the competition alive!

Sidelines:  How did you become a contestant on “Full Metal Jousting?”

JF:  A couple of my friends found the casting call on the Chronicle of the Horse forum and persuaded me to send in an audition video.  From there I went to Los Angeles, along with 100 other finalists, for a one-on-one interview.  Out of the 100 finalists they took the top 50 for tryouts in Mississippi.  From the guys who survived that, the host of the show, Shane Adams, picked the top 16 riders.

Sidelines:  When you were taping the show did you ever stop and think, “Wow, I’m crazy for doing this!”

JF:  The first time that crossed my mind was going down the list to the assistant coaches holding a baseball bat.  Yeah, that was the first time it crossed my mind; but unfortunately with 16 other guys in the competition and millions of viewers you don’t really take the time to second guess that.

Sidelines:  We hear so much about reality shows and how they are staged.  Was the jousting on the show choreographed?

JF:  Everything was entirely un-choreographed.  The History® Channel described it as, “100% authentic, with a twist:  traditional armor was replaced with modern suits weighing 80 pounds and 11 foot long solid fir lances were used as weapons.”

JF:  As a brand new show for the History® Channel, it was different than other shows that have tried to portray something similar.  I really like the way they created this show, the blows were shown in slow motion and it wasn’t choreographed.

Sidelines:  How were your cast mates on the show?

JF:  The other horsemen from “Full Metal Jousting” were all talented in their own disciplines and it was interesting to get the perspective from a steer wrestler, a bull rider, bronc rider, three-day eventer and a theatrical jouster.  The guys I had the strongest connection with were the ones with western backgrounds.  They all were very humble, respectful, had great personalities and they were wonderful horsemen all around.

Sidelines:  Now that you are finished with the reality show, what are your goals for your new farm, Cavalier Show Jumping?

JF:  Since the business is starting from the ground up, I am involved in all areas of operations.  It is a lot of work opening a new stable; but it has been a huge milestone in my life and something that I really love to do. I’m extremely lucky to have such a nice stable in an exclusive location like the Hamptons.  We have 28 stalls, two grass rings, one all-weather sand arena and indoor.  The idea for Cavalier Show Jumping is definitely something that fit into the puzzle of my life.  I have great riders, wonderful families who support them and we are all continuing to grow together as the business expands.  Currently I’m training Kira Kerkorian and Brooke Banks and both have two very promising young horses.  I’m really looking forward to seeing how these young horses can develop with the girls over the coming months.

Sidelines:  What are your passions in the horse world?

JF:  I have found that one of my passions is developing young horses.  I like seeing improvement and having pride in the final product.  Every break through you have, you feel like you have accomplished something. It is the same passion I have when I train my students; I get the same sense of pride when I see the accomplishments of Kira and Brooke.

Sidelines:  You were on the History® Channel; but you also have an impressive family history in the horse world.  What is your family’s horse legacy?

JF:  Both sides of my family have been involved in the horse industry in some way.  My grandfather, Dr. Rost, was a well known course designer and judge.  His wife, Joan Rost, was a national champion western rider. My grandfather, John Fairclough, was the first Four-In-Hand Combined Driving National Champion in America.  My mother, Robin Fairclough, was a well known junior rider, winning medal finals and making a name for herself in the jumpers and equitation.  My father is a professional Four-In-Hand driver and has represented the United States in every World Equestrian Games since 1980.

Sidelines:  What has been the highlight of your career so far?

JF:  It would definitely be riding for Frank and Mary Chapot.  They gave me tremendous opportunities to ride fun, competitive horses.  Out of all of the professionals I have ridden for, they gave me the most exposure in the show ring and for that I’m grateful.

Sidelines:  What do you like to do when you aren’t training, teaching or jousting?

JF:  I really enjoy going to the shooting range, it’s the best way to relieve stress.  I am a pretty down to earth person.  I just try to enjoy life, try new things and always make the best of everything.

Jousting is definitely not a sport for the faint at heart. “The other horsemen from “Full Metal Jousting” were all talented in their own disciplines,” said James 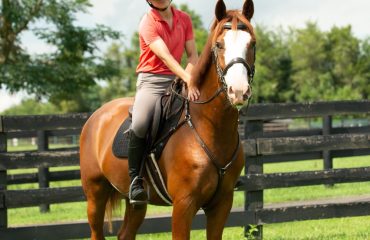 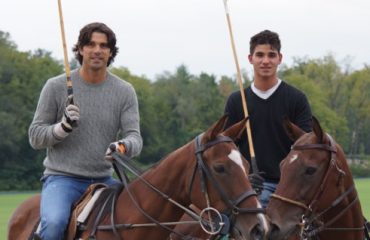 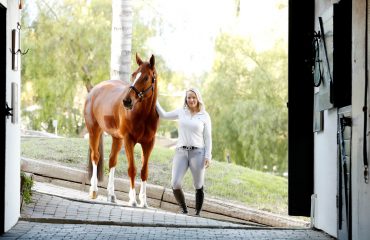