Sabina Chambers: Full Circle—Riding to Judging and Back

All it took was a nickel to get Sabina Chambers started with horses as a child. With a shiny coin in her hand, she gleefully inserted it into a mechanical horse ride outside of the local department store and began cantering away. When her nickel was up and the ride came to a halt, Sabina was hooked. “From that moment on, horses have always been a part of my life,” Sabina said.

Several decades later, Sabina is still all smiles as she mounts up. However, today she isn’t just riding horses at the mall, she’s competing in the hunters with her off-the-track Thoroughbred (OTTB) Leisurely, aka Henry.

In 2020, after a 20-year hiatus from competing, Sabina reentered the show ring with the same enthusiasm as the child who couldn’t get enough of the coin-operated horse. “It was a gift from God to be able to take a break from horses and focus on my children, Collin and Kendall. However, I never could get horses out of my head,” Sabina said.

A USEF “R” hunter judge, Sabina’s desire to saddle up and compete again came as she spent hours watching hunters show in front of her. “Watching others show made me realize a piece of my soul was missing not having a horse in my life,” she said. “Henry has filled that hole.”

By the time Sabina was 8 years old, she was taking regular lessons at a local barn and learning how to jump. However, one thing was still missing—a pony of her own.

Growing up in Kentucky, Sabina was lucky to have a friend group consisting of like-minded horse-crazy girls. “We spent a lot of time going to friends’ barns and riding their ponies,” Sabina said.

“One day we went to the barn and our friend we were meeting didn’t show up. So we decided, with our 9-year-old mentality, we were at the barn, we might as well tack up the pony and ride anyway,” Sabina said. “Let’s just say that didn’t go over too well when our friend and her mom showed up and we were riding their pony. Her mom immediately called my parents and said I had stolen their pony.”

After some swift talking and negotiations by Sabina’s father, a deal was struck to appease the “pony bandit” situation. “We traded a load of rock for the pony, Daisy. She went on to be the pony I competed at ‘A’ shows,” Sabina said.

Sabina was lucky to have a supportive family who embraced her horse passion at an early age. “My dad was the one who took me to horse shows and helped me as a child. He decided that we would go show in Ocala as a ‘showcation’ of sorts,” Sabina said.

It was on that trip to Ocala that Sabina made a connection that would last a lifetime. “I was at the head of the line for the green pony conformation class and didn’t have a clue how to properly stand my pony up. All of a sudden, I heard a kind woman, Sue Ashe, giving me pointers on how to stand a pony up,” Sabina said. “From that moment on, she’s been a great mentor and mother figure to me.”

A petite presence at just 5 feet tall, it took a special horse to convince Sabina to make the leap from ponies to horses. “Rick Fancher had a 15-hand mare, Rendition, that my mom bought me. Once we bought her, I moved to Rick’s barn to learn how to ride her,” she said. “Rendition was a rather unorthodox ride, but Rick taught me how to ride any horse or pony I sat on—a skill that would prove to be useful in years to come.

“I’m so thankful for my mom. Not only did she find me Rendition, but I couldn’t have become the horsewoman I am today without the countless hours she spent driving me all over the country to compete,” Sabina added.

With Rendition, Sabina learned not only how to finesse a tough ride but gained experience and success in both the hunter and equitation rings. Sabina took this knowledge with her when she competed in the Intercollegiate Horse Shows Association (IHSA) for Eastern Kentucky University.

While competing at IHSA shows, Sabina qualified to go to nationals each year. One of Sabina’s favorite horse show memories comes from the IHSA Nationals her junior year.

“We went back for the flat phase and Peter Wylde and I were neck and neck. The judge was systematically calling riders into the center of the ring, whittling away the competitors to determine who would win. Eventually it came down to Peter and me. The judge asked us to pick up our stirrups and post the trot; my horse stepped into the canter and into the center I went,” she said. “It’s still such a proud moment to know on that one day I came in second to future Olympian Peter Wylde.”

With a degree in hand from Eastern Kentucky, Sabina was ready to hit the ground running and start her career in marketing/public relations. However, her dad had other plans. “My dad pushed me to judge before I got a ‘real world’ job. He thought I would be a fair judge and that it would be a great ‘backup’ job for me,” Sabina explained.

“My dad had utmost respect for the judges in our sport. In fact, when I was a child, he always had me write thank-you cards to the judges after each competition. I’m so thankful he instilled that reverence for those horsemen who give back to the sport as judges in me,” Sabina said.

The ‘backup’ job stuck. For the past 30 years, Sabina has had the honor of judging horses at local, rated, IEA and IHSA horse shows. Today she can be found judging at the World Equestrian Center, Wellington, Tryon and the Kentucky Horse Park.

“I’m so lucky that some amazing horsemen helped me obtain my ‘r’ and ‘R’ judging cards. The hours I spent sitting with mentors like Sue Ashe, Leo Conroy, Joey Darby, Jimmy Lee, Frank Willard, Linda Andrisani, Ralph Caristo, Brian Flynn and so many more was priceless,” she said.

It was while sitting in the judge’s box that Sabina got the urge to step in the ring and compete herself again. “All of a sudden, after 20 years, I had that desire to find myself a horse and get back into the sport I’ve always loved,” Sabina said. “I took the knowledge I had from my mentors and what I’d learned myself being in the sport for so many years to help me find Henry.”

In December 2019, after an emotionally draining horse search, Sabina finally found her heart horse, Henry. From the beginning of her search, Sabina knew she wanted an OTTB as that’s what she grew up riding in the ’70s and ’80s.

“Growing up in Kentucky, Thoroughbreds were what we rode. I had a fantastic OTTB, Benetton, whom I started from a greenie and he ended up winning everything for me in the Adult Amateurs in Zone 5,” Sabina said. “I just love the athleticism of OTTBs and how quickly they learn.”

Thanks to a connection made via her real estate business, a client who has since become a friend heard Sabina was looking for a horse. “Her husband is a racetrack trainer, so she had an inside track to help me find Henry,” Sabina said.

Although Sabina can’t imagine her life without Henry today, it wasn’t exactly love at first sight. “The first time I saw him jump, he jumped a cross-country jump, and I wasn’t impressed. However, once I saw him jump his first hunter jump and noticed his natural bascule over it, I was sold,” Sabina said.

There was also the matter of size. “I still fit a small pony, so when I heard Henry was 16.2-hands, I said, ‘He’s too big. I don’t want a big horse.’ But I channeled my inner Margie Engle and didn’t let his size deter me,” she said.

A graduate of the Retired Racehorse Project, Henry was the 2019 Reserve Champion in dressage. “By the time I found him he had been a winning racehorse, done dressage, evented and was about to be made into a hunt horse. He was a hidden treasure just waiting for me find him in that field,” Sabina said. “We each gave each other a second chance in this sport.”

Finding Henry not only helped Sabina get back into the show ring, but it also helped her keep her sanity during these uncertain COVID times. “Having Henry in my life has given me new focus and increased my happiness. He’s brought a piece of me back to life,” she said.

When Sabina started the 2021 show season, she wanted to see how the duo would fare in the Thoroughbred Incentive Program (TIP). “I had hoped maybe we could top our region in the hunters,” Sabina said.

They far surpassed that goal. “Earlier this year, when I looked up the 2021 TIP results, I saw he was champion of the region. Then I looked further and saw he was champion of the hunters and amateur/owners for the entire international program. I almost started crying, I was so proud,” she said. “It was surreal to know this rusty amateur achieved this level of success without a trainer.”

With a plethora of tricolors from the 2021 season, Sabina has set her sights on different goals for 2022 and beyond. “After the success we achieved last year, I’ve shifted my focus to competing in derbies. I want to enter classes where I have a chance to win some of my entry fees back,” she said. “I’m hoping next year we can do the TAKE2 Thoroughbred classes and move up to the 3’ division.”

Sabina hopes by sharing Henry’s success, she can encourage others to help OTTBs find their second act in life. “Each OTTB adopted or purchased makes room for another to find a life after racing,” she said. 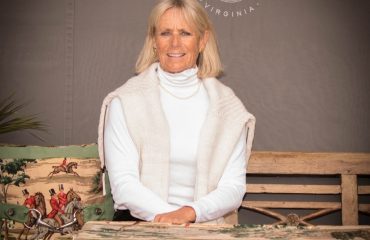 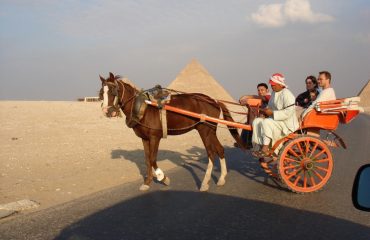 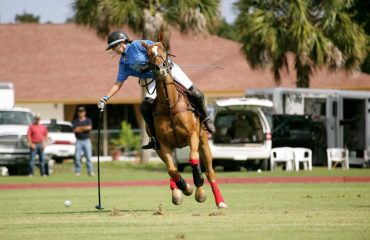