For nearly two decades, the EQUUS Foundation has been protecting America’s horses and ensuring they receive the respect and treatment they deserve.

In that time, the number of horses shipped to slaughter each year has been declining — but there’s still much work to be done.

The EQUUS Foundation raises money to give to its EQUUS Foundation Guardians, venerable charities that have applied for grants and gone through a rigorous scrutiny to ensure they’re truly committed to the highest standards of horse care.

The foundation also promotes the unique relationship between horses and people, encouraging the use of horses as healers and extending the influence of equines to as many people as possible.

Show horses — and their riders and owners — are giving back to their at-risk but equally cherished counterparts.

And it all started with a broomstick.

From Mother to Daughters

Like so many other avid equestrians, Lynn Coakley’s passion for horses came seemingly from nowhere.

“When I was just 2 years old, my mother found me riding a broom around in the playroom — hoping my destiny would be horseback riding, and not witchcraft,” Lynn shared. “And so it was.”

She started riding at a young age and considers herself blessed not only to have had a horse of her own at 10 but to be taught by the renowned Emerson Burr at the Fairfield County Hunt Club in Westport, Connecticut.

Years later, Lynn knew she wanted to share the magic of horses with her two daughters, and was living next door to the club. Rolling out of bed to their barn and riding their horses out of the backyard to the club for lessons developed into showing competitively.

“It was the trainers — Sue Conley, Robyn Pavone, Jenny Martin Rudaz, Tim Kees, Molly Ashe Cawley, Leslie Howard and later Peter Lutz with my youngest daughter — who molded their passion into a competitive spirit that took them to a level in equestrian sport quite distant from our backyard barn — including the Winter Equestrian Festival in Wellington, Florida,” Lynn said.

From her years as a “show mom” in the top tier of the hunter-jumper world, Lynn counts her enduring friendships with Jenny Belknap Kees and Catherine Herman among the best outcomes. Both Jenny and Catherine would serve on the EQUUS Foundation Board of Directors from its founding.

In addition to friendships that would one day change the equestrian world, even more than ribbons and championships came from the family’s time showing.

“It was an exciting lifestyle and sport that we all enjoyed,” Lynn said, “but looking back, it was the one-on-one experiences with our horses in our backyard that we all treasured day in and day out.”

Treasuring Beyond the Ring

When her youngest daughter left for college, it was also time for their dearly loved horses to move to their own next chapters. That was when Lynn made an eye-opening discovery.

“While we were fortunate to be able to provide our horses with a comfortable and safe environment where they could enjoy the remainder of their lives,” she said, “in the process of exploring the options, I learned that many horses in transition find themselves at risk for abuse and neglect because their owners can no longer care for them.”

In response, Lynn created the EQUUS Foundation in 2002.

The original intent was to help a few local equine charities via the first grand prix and fundraiser at the Fairfield County Hunt Club June Benefit Horse Show, which Lynn had chaired for many years.

The result, however, grew from a community-based organization funding a handful of charities to a national organization benefiting hundreds of equine charities across the country.

“Because our knowledge about equine welfare grew,” Lynn replied. “As our board members and I looked ‘behind the scenes’ of the insular world of America’s horses, we discovered a seriously tragic side to the equine industry — that, when our horses no longer serve us competitively in sport or become a financial burden, they face unknown futures that often include the risk of slaughter.”

The more they learned, the more they were compelled to do something that made a big impact and a real difference in the lives of horses that had no place to go — and at the same time help more people experience the joy of horses in new ways.

New Ways to Give Back

Rather than rescuing horses directly, the EQUUS Foundation is the link between donors and equine rescues and charities. They take the risk out of donating by giving grants only to carefully vetted charities, known as EQUUS Foundation Guardians, that demonstrate their transparency and commitment to horse welfare.

In 2018, the EQUUS Foundation launched a novel way to raise money for horses in need: Equine Ambassadors.

The idea originated with the first Equine Ambassador’s owner, Cheryl Olsten. When Cheryl first purchased Lafitte De Muze, she wanted to donate prize monies to a good cause — and found the EQUUS Foundation.

Cheryl reached out to Lynn, who thought the unique concept would help further the EQUUS Foundation mission and raise even more awareness in the show community.

The board agreed that having competition horses donate some of their winnings was an exciting, new way to have equestrians — and their horses — give back to America’s at-risk horses. Lafitte, ridden by Amanda Steege, became the first EQUUS Foundation Equine Ambassador.

Lafitte was soon joined by Happy Thoughts, a hunter owned by Caroline Moran and ridden by Haven Schatt, and, most recently, Cacan, a jumper owned and ridden by Serena Marron.

“We hope that it’s a tremendous source of pride for the owners of our Equine Ambassadors, to know that their horse is helping horses and helping spread the message that all horses are champions and deserve a chance to shine!” Lynn said.

Cheryl, who couldn’t have known that Lafitte would place third nationally for money won in 2018 and first in 2019 for both money and points, feels her horse’s efforts are dually rewarded by donating his prize money. “It just feels like good karma,” she said.

Watching the Equine Ambassadors raising money to help other horses makes Lynn feel incredibly proud of the horse, the owner and the rider for making such a compassionate choice.

“The fact that our Equine Ambassadors are really just that — ambassadors that help us educate and inspire other horse lovers to be horse protectors — is incredible,” she said, “and that their winnings in the show ring will go directly to horses in need of a lifeline is fantastic!”

Beyond all the money he’s raised in the ring, Lafitte also makes a great ambassador outside of competition. He enjoys being around people, and has a can-do attitude. He stands out not just for his talent, but for his personality.

Cheryl and Amanda’s enthusiasm for the cause magnify his role as an Equine Ambassador — including by keeping followers up-to-date on his training throughout the COVID pandemic. “Keeping Lafitte physically fit, as well as keeping him fresh and happy, is always the objective,” Amanda wrote, detailing their shift to daily rides on the racetrack at HITS Ocala for stamina as well as field work and gradual hills for strengthening.

Even without being in the ring, Lafitte has proven to be an upstanding ambassador. “Since Florida schools closed during the pandemic, my groom Toro Diaz’s 8-year-old son, Josander, had been spending more time at the barn,” Amanda said. “He loves the horses and has enjoyed spending his new-found time helping to care for them. He just started learning how to post on a few of the horses at the barn, and most recently we put him aboard Lafitte. His reaction: ‘Amanda, this one feels so good!’”

Josander was right about Lafitte feeling good: He won back-to-back USHJA International Hunter Derbies at his first two shows back in the ring. With Lafitte and the other Ambassadors leading the way, Lynn hopes to expand the program to competition horses of all disciplines, not just in the hunter-jumper world, and sign more Equine Ambassadors to shine for all horses across the country that are at risk for abuse, neglect and slaughter.

“Horses need us!” she concluded. “So will our next Equine Ambassador step forward and give us a call?” 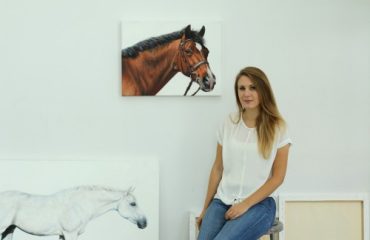 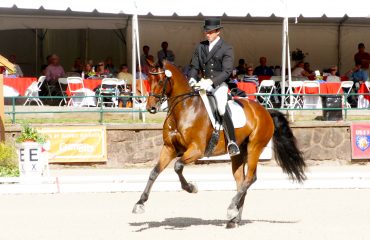 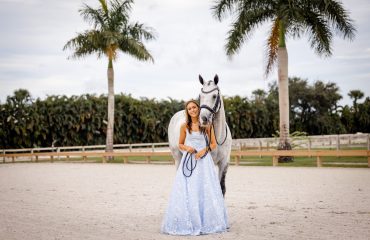