Wellington, Florida – Adrienne Sternlicht of Greenwich, Connecticut, was the latest winner in the SSG Gloves “Go Clean for the Green” promotion following her victory in the $15,000 SJHOF High Amateur-Owner Classic held January 18 at the FTI Consulting Winter Equestrian Festival in Wellington, Florida.  SSG Gloves is offering a total of $60,000 in bonus money over the 12-week circuit to reward riders for their loyalty to the SSG Gloves brand.

Held Saturday morning in the International Arena, the $15,000 SJHOF High Amateur-Owner Classic saw 33 entries attempt the first round track set by Belgian course designer Luc Musette.  Four riders accomplished the feat, and all four were wearing SSG ‘Digital’ style riding gloves to put themselves in contention for the $1,000 bonus. 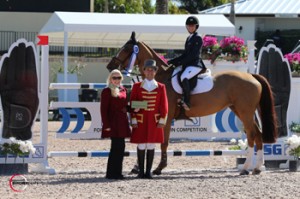 Adrienne Sternlicht, mounted on Oreade des Dames, is presented with a $1,000 bonus from SSG Gloves “Go Clean for the Green” promotion manager Jennifer Ward for wearing SSG ‘Digitals’ on her way to victory in the $15,000 High Amateur-Owner Classic held January 18 at the 2014 FTI Consulting Winter Equestrian Festival in Wellington, FL.
Photo by Sportfot

For wearing SSG ‘Digital’ riding gloves on her way to victory, Sternlicht earned a $1,000 bonus from the Canadian manufacturer.

“In the class I won in Kentucky, I completely forgot to put them on.  Today I remembered, and it has been fantastic!” said Sternlicht, 20, of making up for a missed an opportunity to win in the “Go Clean for the Green” promotion at the 2013 Alltech National Horse Show.  “It’s an incredible incentive for young riders and professionals alike.”

Of her SSG ‘Digital’ gloves, Sternlicht noted, “They are super light-weight.  Especially when it’s hot, they keep my hands cool and they have a good amount of grip.  The horse I rode today is particularly strong, and they help me keep a light feel.”

Earlier in the week, Alvaro ‘Doda’ Miranda of Brazil was awarded a $3,000 bonus for wearing SSG ‘Digitals’ on his way to victory in the $34,000 Ruby et Violette WEF Challenge Cup Round II.  A $1,000 bonus was also on offer in the $10,000 High Junior Jumper Classic but, unfortunately, it went unclaimed as the winner, Brett Burlington, was not wearing SSG ‘Digital’ gloves.

SSG ‘Digital’ riding gloves are available for purchase at numerous Wellington locations, including Tackeria, as well as on-site at the FTI Winter Equestrian Festival show grounds at various retailers including Running Fox, Jod’s, and Beval Saddlery. 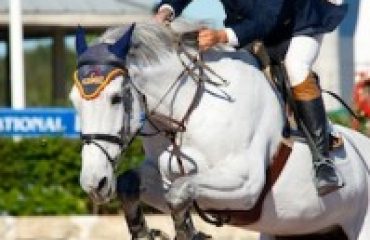 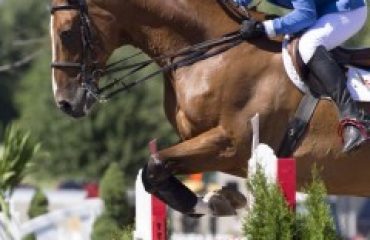