Saturday night’s 1.50m final will be held at 7 p.m., not 8 p.m. as previously stated, due to entries. The 2013 FTI Consulting Winter Equestrian Festival features 12 weeks of competition running from January 9-March 31, 2013, and will be awarding almost $7 million in prize money throughout the circuit.

Richard Jeffery of Bournemouth, England, is the course designer in the International Arena at the Palm Beach International Equestrian Center for week eleven. In Thursday’s WEF Challenge Cup class, Jeffery saw 70 entries and 12 clear trips over the first round course. Eleven of those entries returned for the jump-off, and six of those jumped double clear. Alvaro de Miranda and RD Jumper Higher Ltda’s Show Show had the fastest round of 35.34 seconds for the victory. Rodrigo Pessoa and Double H Farm’s HH Let’s Fly finished in 37.58 seconds to place second. Third place honors went to Germany’s Daniel Deusser with his time of 37.80 seconds aboard Cornet d’Amour, owned by Stephex Stables and Pedro Veniss. 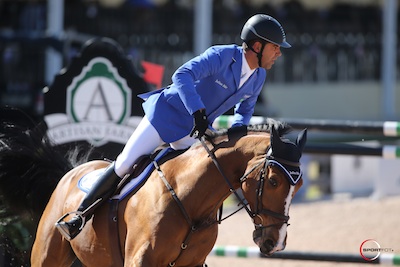 De Miranda and Show Show, an eleven-year-old Belgian Warmblood gelding by Darco x Royal Fleu, have had many top finishes in the last eleven weeks of competition in Wellington, but this was their first win. The rider went home to Brazil last week and gave his horses the week off to rest. He just arrived back on Thursday morning.

“It feels very good to win,” the rider smiled. “I think it was very important that I gave my horses a rest last week. I felt my horse jumping really good today. He did last weekend and he was clear and then had two or three down (in the jump-off) and he felt really empty. He needed a little bit of air, so we gave him the week and put him out a lot in the paddock.”

“The jump-off was very good,” he continued. “I gave everything that I could. I didn’t see Daniel, but normally he is very fast and I was surprised to see that I was almost two seconds faster than him. Also especially to have me and Rodrigo one and two is good. It is very tough to win here and finally I got my first win, so I am very happy.”

Show Show is a horse that was purchased from fellow Brazilian rider Carlos Ribas. De Miranda explained that the horse had jumped a lot of clear rounds, but was not used to going fast and often had time faults.

“Normally I like to gallop my horse, so at the beginning I was shocking him a little bit,” he explained. “That is why sometimes the jump-offs are difficult for him because he doesn’t look by himself for the fence. Sometimes I have a very good first round and then one down in the jump-off, but normally when he is clear, he is in the top three. He is learning a lot, and he is a super brave horse. He is a very special horse and I am very proud of him.”

De Miranda’s wife, Athina Onassis de Miranda of Greece, was the first competitor to clear the short course without fault and finished sixth aboard Camille Z, owned by the rider and Victory Equestrian. De Miranda was also very proud of her.

“Athina was super,” he smiled. “She has been training with George Morris now for three weeks and I am very happy because I think it fits perfectly. We always admired him a lot, the great job that he did with the American team here as a trainer and as the first man of the team. We are really lucky to have the possibility of him coaching us. He started now with Athina and I am going to have his help also. We are trying to see if he can be with us as much as he can for the next four years.”

De Miranda also feels that he and his wife as well as their horses have all improved throughout the last eleven weeks with the ability to show so much.

“I think we have progressed a lot over the circuit,” he said. “You have so many rings. Normally we can never go with all of the horses to one show and here it was good to have all of the horses together. You are able to jump the young horses in a class in one ring and then another here in the big ring. I think especially for Athina it was very good because she is progressing a lot. She is riding a lot of horses. I think twelve weeks here is like six months in Europe. You have the possibility to show so much. The time is always very short and that is one of the things that Athina needs to improve. It has been very important for her to be here because she can work on exactly what she needs to improve.”

Along with his winning prize money, De Miranda was also presented with a special rider’s bonus for the SSG “Go Clean for the Green” promotion. A $3,000 bonus is offered each week if the winning rider of the Challenge Cup class is wearing the SSG ‘Digital’ Riding Gloves in all rounds of competition with the SSG logo clearly visible. 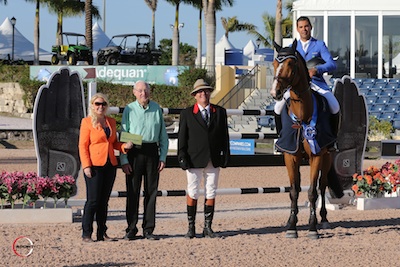 Third time was a charm for Marshall and Amanda Lyerly in the Gold Coast Baby Green Hunter division at the FTI Consulting Winter Equestrian Festival (FTI WEF). Week eleven marks the third time the pair has competed together and their first time earning championship honors for the division. Lyerly piloted Marshall to first place under saddle and consistently strong over fences rounds, jumping to third, first, and two second place ribbons.

Reserve championship honors went to Champagne, ridden by Ryan Roy and owned by Leigh Stewart. Champagne and Roy were third under saddle and won two of four over fences rounds, earning third place ribbons for their final two courses. 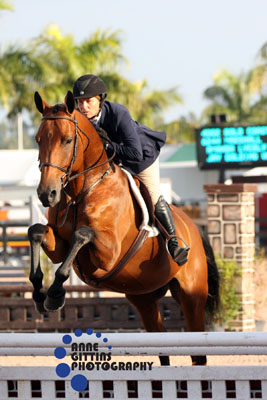 Lyerly and Marshall also collected two reserve championship titles the last two weeks of the FTI WEF. Marshall may have just started his show career, but he is clearly off to a promising start. The six-year-old Warmblood gelding is owned and trained by Jay Golding of Gordonsville, VA. Lyerly, based in Gates Mills, OH, is pleased with the gelding’s adjustment to life as a show horse.

“I rode him a little bit down here [at the FTI WEF] last year. He had just started jumping and he didn’t show. This is his third week showing. He’s still new to it all, but he’s very mellow and brave. He’s almost ready to do something bigger, I think. He’s got a great brain and is very quiet,” Lyerly commented.

Marshall’s calm and collected demeanor was especially evident among a large class of green horses, many of whom became distracted or nervous in the surroundings of the busy Palm Beach International Equestrian Center (PBIEC).

“For his experience level, he’s very consistent. He started that way. He knows his job and nothing ever really fazes him,” Lyerly explained. “Once in a while, he’ll be a little distracted by someone driving by, but he really is a quick learner.”

In addition to his easygoing attitude, Lyerly described Marshall’s striking movement as his biggest strength in the show ring. “He has a beautiful canter between the jumps and is very elegant looking,” she stated.

The future is bright for Marshall and Lyerly, who hopes to keep their winning strike alive next week in the FTI WEF’s final week of competition. “He’ll show [week twelve] and maybe move up to the 3′ next week. I think he’s getting a little bored in the 2’6″,” Lyerly revealed.

Marshall’s competition schedule after the FTI WEF is up in the air, as owner Jay Golding hopes to find a new home for the promising young prospect. Golding focuses on sales of young horses, but is also eager to move Marshall up to the Pre-Green 3′ divisions.

Week eleven of the FTI WEF, sponsored by Artisan Farms, continues Friday with the Ariat Adult National Medal, hosted in the Rost Arena of the PBIEC. The $33,000 G&C Farm 1.45m and George Morris Equitation Championship presented by Alessandro Albanese will be featured in the International Arena. For full results, please visit www.showgroundslive.com. 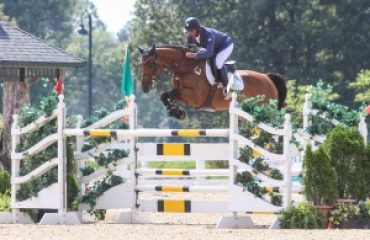 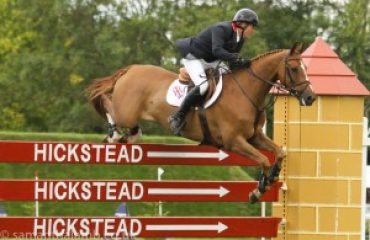