Morrison was the first of six to return for the jump-off in the $10,000 SJHOF High Junior/Amateur-Owner Classic, and a tidy tour of the jump-off track yielded a four-fault score in a time of 44.38 seconds.  Others who followed opted to try for slow and steady clear rounds, but the rails kept falling.  Helena Le Picart came closest to catching Morrison, but her four-fault effort in a time of 44.62 seconds aboard Bon Vivant would not be fast enough to take over the lead. 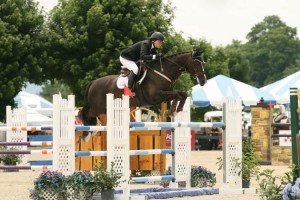 “As the first one in, you always want to be the one to set the bar because you are not in a position to chase anyone,” said Morrison of Creemore, ON.  “We did an inside turn and unfortunately had it down, but we got lucky.  Our strategy worked out.”

Morrison trains with Christi and Mac McQuaker at Gryphon Farms in Schomberg, ON.  Mac McQuaker had imported Duvel as a three-year-old from Holland, and Morrison purchased the now nine-year-old Dutch Warmblood gelding when he was five.

“He was my dream horse, the one I always longed for in the barn,” said Morrison who has now been partnered with Duvel for the past four years.  “He’s got tons of personality.  He’s spunky, full of energy, and so much fun to be around.  We developed together from the one-meter jumpers.  We know each other very well, and I think that’s what makes us click.  It also helps that Mac has been the trainer all along.”

Entering her second year at Wilfrid Laurier University in Waterloo, ON, Morrison is showing at the Vermont Summer Festival for the third time, having also competed in 2009 and 2010.

“It’s a great show, and it’s so beautiful here,” said Morrison, 19, who will also be contesting week two of the Vermont Summer Festival.  “Everyone in the community is really helpful.”

In the $5,000 NAL Low Junior/Amateur-Owner Classic, four riders qualified for the jump-off including Vivian Yowan with two mounts.  As the first rider back to challenge the shortened jump-off track set by Irish course designer Alan Wade, Yowan laid down a clear trip in a time of 44.10 seconds with G&C Sacramento, a 14-year-old Dutch Warmblood gelding.  Chelsea McCarthy was next in the ring with Poco Van Depco, but an eight fault score would leave them fourth in the final standings.

Collins then took up the challenge, posting a fault-free effort in a time of 39.10 seconds to move into the lead.  Yowan had one last chance to take the title, but it wasn’t meant to be as a rail down with Cloverleaf Farm’s Ralvesther in a time of 40.26 would leave her third in the final standings.  With that, Collins scored her first victory in a Low Junior/Amateur-Owner Classic. 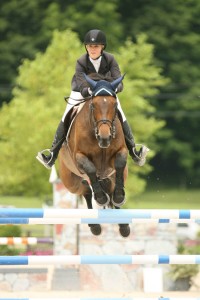 “Consistency was what I was looking for today,” said Collins of her performance with Tomasa, a 12-year-old bay mare.  “We were clear, and it all paid off.”

Owned and normally shown by her mother, Tomasa is on loan to Collins as she completes her final year as a junior competitor.  In the fall, Collins will be starting school at Skidmore College and will part of the Intercollegiate Horse Show Association (IHSA) program.

“The trainers from Skidmore are also competing here in Vermont, so I got to know the trainers and they got to see me win,” said Collins.  “Riding is such an individual sport, so I am really excited to ride as part of a team and represent my school.”

Originally from Seattle, Collins moved to Greenwich, CT, two years ago where she trains with Amy Lowrey of Narnia Farms.  She will be competing at the Vermont Summer Festival for weeks one and two, noting, “I love it here, it’s gorgeous.  I love all the green.  It’s very beautiful.  And the footing is great!”

The six-week Vermont Summer Festival, celebrating its 20th anniversary in its current Manchester location, offers more than $750,000 in prize money, making it the richest sporting event based on purse in the state of Vermont. 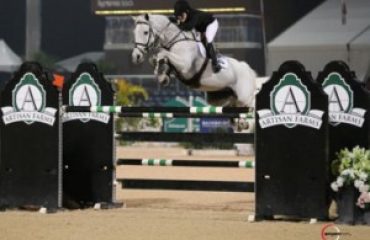 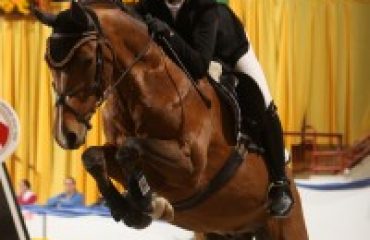