Wellington, FL – January 10, 2014 – The Adequan Global Dressage Festival kicked off the “Friday Night Stars” series with an exciting FEI Grand Prix Freestyle competition and full spectator stands at The Stadium at Palm Beach International Equestrian Center. Leading the way was Tinne Vilhelmson-Silfven (SWE) on Don Auriello, who won with a score of 81.575%. Lars Petersen (DEN) and Mariett scored 76.925% for second place. Fellow Dane Mikala Munter Gundersen and My Lady placed third with a score of 74.825%.

The first week of the AGDF, sponsored by MTICA Farm and Everglades Dressage, runs through Sunday, January 12. The AGDF continues for 11 more weeks of top dressage competition through March 30. 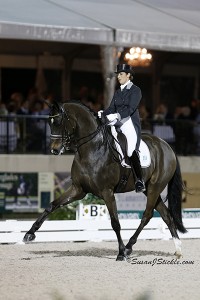 Vilhelmson-Silfven started with a win in yesterday’s FEI Grand Prix class, but with the different atmosphere of the lights and spectators, she felt like Don Auriello handled the change well. “Today was a great atmosphere here. I really had a lot of fun riding in there today,” she said. “I think Don Auriello got a little bit impressed, but then he focused and was really nice to ride the whole way through. It was lovely with so many spectators, and the feeling in here is really great.”

She said of her test, “My highlight was really that he did let me ride, and I had a great feeling. He does everything without a big effort. It’s a really nice feeling when you feel the horse is so mature that you can just ride. I think I had that today. The pirouettes is one of his highlights, and the piaffes.”

Petersen said that he knows his music “in and out.” He added with a laugh, “I also knew exactly where I was in places that I should not have been! But otherwise it’s a great atmosphere to ride here; I think it’s like riding anywhere.” 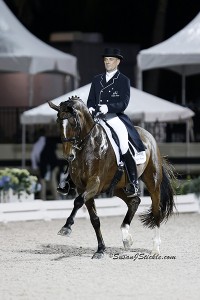 He noted that Mariett was “a little bit tense, a little spooky,” but that “overall though, it’s the first show, so I was pretty happy.” He continued, “I think the piaffe, passage was good. I normally get really good marks for my music (too).”

Gundersen has been working on her new freestyle routine for three months and had only ridden it at national shows to practice. “My Lady was unbelievable,” she related. “She was paying attention, not looking at anything outside. I’m crazy about the music. I think it suits her very well. I think I had good piaffes, good changes. I was particularly happy with the walk. She was very relaxed in the walk and did very well. It doesn’t sound interesting to be excited about the walk, but it was a bit of a highlight! I’m glad that she’s relaxed enough with the big atmosphere to show a good walk.”

Gundersen commented on the great turnout for the event. “I know there were a lot of people. I was very happy to see that because it’s the beginning of the season. I’m happy we have so many spectators for a dressage show,” she said. 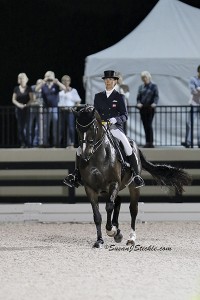 Janne Rumbough of MTICA Farm, the sponsor of the class, noted, “It’s wonderful that we have this here. I’ve been here a long time and seen dressage develop. Look at these riders and these horses. This is what we worked on for so many years. I look at the spectators tonight, and I believe the freestyle is the answer to have people enjoy dressage. What these three people showed today was beautiful. I’m just so pleased and thanks to Mark Bellissimo for doing this.”

Allyn Mann of Adequan, the title sponsor of the GDF, was also on-hand to watch the first CDI of the season. “I would say year three started off beautifully. It’s really humbling to come here and to have the opportunity to support a wonderful event and to see these wonderful riders and horses really embellish the sport of dressage,” he remarked. “We’re excited, and we did exceed expectations already. If this is as good as it gets for the season, I would be gracious and humbled by it. But I think it’s going to continue to improve. As the prize money does continue to grow, I think we’ll see a continuation of wonderful riders and horses be a part of this great dressage world.” 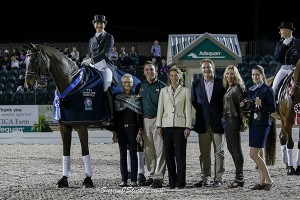 It was a win on home turf for Caroline Roffman (USA) and Bon Chance today during the FEI Prix St. Georges. Fellow U.S. rider Heather Mason and Zar followed in second place with a score of 69.711%, and Spanish rider Juan Matute Jr. with Don Diego Ymas rounded out the top three at 68.9974%.

Coming off a year of ‘vacation’ for the 8-year-old chestnut gelding, Roffman was very pleased with how he performed for her. “I haven’t shown him for a year, but for him, he’ll get better with each show,” she commented. “That’s what he needs.” 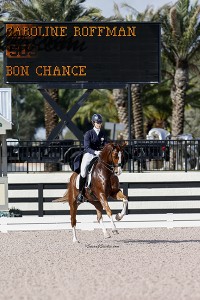 Although Bon Chance is a sales horse in her roster, she is more than happy to continue showing him, saying he shows a lot of promise in the ring. “He has a lot of swing, a lot of elasticity, and he’s like a metronome when he trots – it’s always the same tempo,” she described. “He’s a funny looking horse on the ground. When people see him he’s long, he has a skinny neck and he’s just a little bit weird looking. But in the ring he presents himself, I think, in a really good way.”

The gelding also offers somewhat of a challenge to Roffman. “He is a little bit of a handful, so you have to take it all in stride. It’s his first CDI ever, it’s his first international Intermediaire I, and I hope this year he continues to develop and get confident in the ring,” she said. 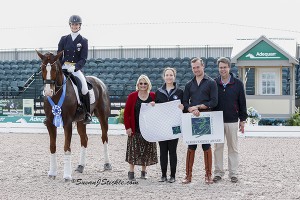 While the Adequan Global Dressage Festival brings out the best in the world to compete, Roffman prefers to focus solely on the horses. “I find myself keeping a little bit of a goal in mind, but they’re horses,” she remarked. “They have their own feelings, their own agendas. You can want anything, you can plan 100%, but if they’re not ready or willing or able to do it? For me, I just focus on developing the horses, and that’s how you know you’re ready. (They) hopefully get better and better as the show goes on.” 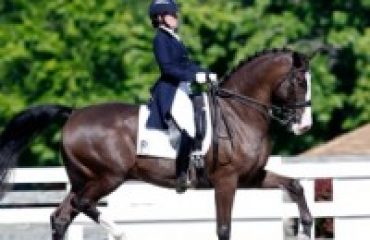 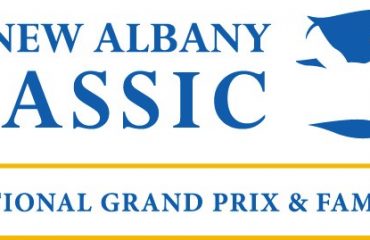