Week ten’s FTI WEF competition will run March 13-17 at the Palm Beach International Equestrian Center (PBIEC) featuring CSI 3* competition. Highlights include the $33,000 Ruby et Violette WEF Challenge Cup Round 10 on Thursday, the $33,000 G&C Farm 1.45m on Friday, the $82,000 Horseware Ireland CSI 3* Grand Prix on Saturday, and the $33,000 Suncast 1.50m Championship Jumper Classic on Sunday. The $35,000 G&C Farm Puissance will be on Friday night at 6 p.m. at The Stadium at PBIEC. The 2013 FTI Consulting Winter Equestrian Festival features 12 weeks of competition running from January 9-March 31, 2013, and will be awarding almost $7 million in prize money throughout the circuit.

Third in the order, Alise Oken was the first rider to clear the course aboard Hi Hopes Farm LLC’s Marcus Quintus and held the lead through a large part of the class with her time of 61.51 seconds. Nineteen rounds later, Beezie Madden and Abigail Wexner’s Mademoiselle stole the lead in 59.35 seconds. Two rounds after that, Oken returned aboard her second mount, Hi Hopes Farm LLC’s Kaid Du Ry, to reclaim her top spot with an even faster 58.92 seconds. They would both be beat a few rounds later when Johannes Ehning and Winley Farm LLC’s Cayenne 162 breezed through the timers in 58.87 seconds for the win. 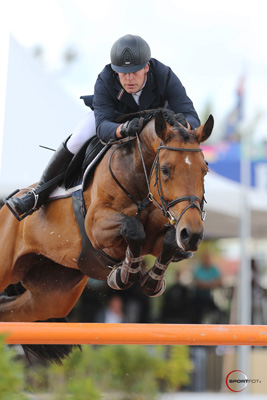 Cayenne 162, a ten-year-old Westphalian mare by Cornet Obolensky x Gonfaron, is a top speed horse for Ehning. The pair has had several good finishes in the last few weeks in Wellington and today was finally their day for a win.

“I think I am really lucky; I have a really fast horse and I had a few classes already where she was second and third,” Ehning noted. “We went today and we were really lucky to win it. I think you could not do so much in the course; you just needed a really fast horse, so it was a good round me and for my horse. We were successful.”

“I have brought her with me three years now to America and I think she really likes it here,” Ehning stated. “In the end of last year I was in Abu Dhabi with her on the Global Champions Tour and she placed in all three classes. She was second in a big class and the first day she won a class. She feels really good outside in big arenas.”

Commenting on Cayenne’s style, Ehning detailed, “She is crazy, but she is easy in the course. That is the easiest thing, to ride her in the course. With dressage work and warm-up it is difficult, but in the course she is doing her job all of the time. She likes to go fast and she is super careful. The quality is unbelievable from her.”

This will be Ehning’s last week in Wellington as he leaves on Monday, but he has enjoyed his time and was happy to get a win to kick off the final few days.

“I really like it here,” he smiled. “This year we only did three weeks here. Normally we do four or five weeks. We always want to come, but we are normally only able to do it every second year, but in the beginning of this year we decided to come for three weeks because it is really lovely.” 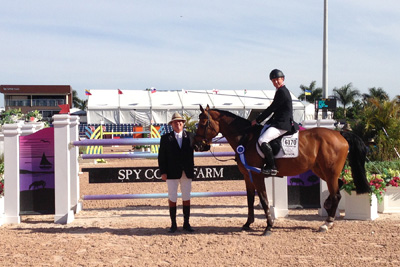 Johannes Ehning and Cayenne 162 in their winning presentation with ringmaster Cliff Haines.

Ehning was also happy to get the win in the final class on Wednesday as he finished second in both of the classes held earlier in the day. In the $6,000 Spy Coast Farm 1.40m jump-off, Sarah Segal and Horatio St. Ventures’ Tilghman and Cian O’Connor and Mary Chapot’s Zealous were both winners in a split class. Ehning and Nybor Pferde GMBH & Co. KG’s Appearance 2 and Todd Minikus aboard Karen Polle’s Udonnay Z were each second. In the $8,000 G&C Farm 1.45m jump-off, Alexandra Paillot guided Carol Sollak’s Brooklyn Blues to the win. Ehning and Appearance 2 were once again second.

Week ten of the FTI WEF will continue on Thursday with the $33,000 Ruby et Violette WEF Challenge Cup Round 10 in the International Arena at 1 p.m. For full results, please visit www.showgroundslive.com. 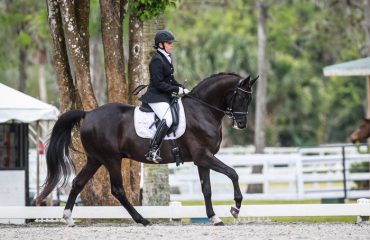 Two for Two: Heidi Degele Scores 82% with Don Fredo to Round Out the Season 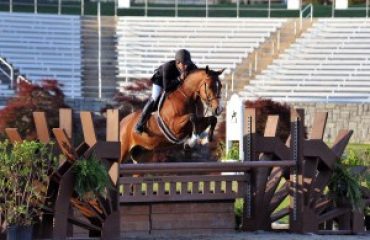 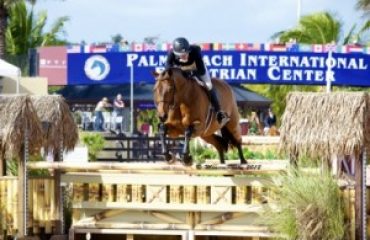