Broken Arrow, Oklahoma—The 2013 North American Stallion Testing will go down in the record books as one of the largest, and most challenging, since Silver Creek Farms began hosting and producing the event seven years ago at their top-notch facility outside of Tulsa, Oklahoma. A collection of stallions bred in Germany, Austria, Czechoslovakia, Canada and the United States were trained, tested and judged by a panel during their stay in the Sooner State. The winner of the 70-Day Test, Canadian-bred Fabian DSF (Freestyle x Hierarch), claimed top honors with exceptional marks for rideability. The Reserve Championship went to Horses Unlimited’s Gallant Reflection HU (Galant du Serein x Rohdiamant). The bright chestnut was the top-placed American-bred, with an impressive fourth place in the jumping index and a very close second in rideability index. 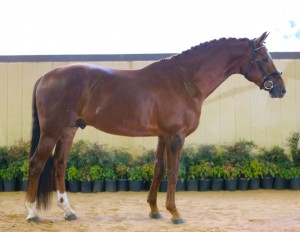 During the testing, candidates were evaluated on a series of universal criteria including gaits, jumping, rideability and character. This process allows stallions to show their versatility without emphasizing any one style or discipline. They received marks from multiple judges during both the “training phase” and “test phase” of the event. The 70-Day Test began with a veterinary inspection of a large group of eighteen stallions, ages 4-8 years, on the 27th of September.  Two ponies and a three-year-old joined the group on the 7th of November for the 30-Day Test portion of the event. The training phase commenced during the pleasant falls days of western Oklahoma. By the time the final scores were given, one of the most difficult winter storms in recent memory had taken ahold of the entire region. The Governor of Oklahoma, Mary Fallin, declared a state of emergency and traffic across many surrounding states came to a standstill.

A major storm, rider injuries, nor a series of other challenges deterred the team from completing their goal and awarding final marks to the twenty-one contestants. “This is the first time we had a perfect finish. All of the stallions that were presented completed their testing,” explained Summer Stoffel, owner of Silver Creek Farms. She credits not only the tenacious equines, but also a dedicated staff, guest riders and judges, Barbara Sikkink and training director Harald Hoffmann for achieving this milestone. Stoffel, herself a breeder of a 70-Day Test winner, is passionate about giving stallion owners in North America a path to evaluate their horses. Anne Sparks, owner and breeder of Gallant Reflection HU, was very complementary of the level of commitment Stoffel’s team brought to the testing. “Summer was there for us as owners during the entire process and was willing to do whatever was needed to help our horses be successful,” explained Sparks.

Education and mentorship in the industry is a priority for both Stoffel and Sparks. Both women are quick to share their experience with others seeking to test and license stallions in North America. “ I sent another homebred through the 70-Day Test in 2009. Galante HU (Galant du Serein x Landor S) is now fully licensed and a grand prix showjumper. That experience taught me the importance of correct preparation of your stallion for testing.” Building on the knowledge gained several years ago, Sparks decided to send her Zweibrucker colt to Christian Baier of Southern Blues Equestrian in Memphis, Tennessee. Originally from Tranås in southern Sweden, Baier is a well-seasoned stallion handler and trainer. He and Sparks partnered successfully on other occasions making the choice easy for Gallant Reflection’s breeder. Baier was the handler of Pikko del Cerro HU during his 2009 Dressage at Devon Stallion Championship, as well as his 2011 American Hanoverian Society East Coast Licensing Championship. 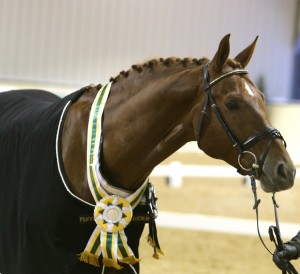 “Reefer”, as he is affectionately called, arrived at the Tennessee Farm in February. During the following months the colt would learn the basics and prepare for the rigors of a 70-Day Test. Mr. Baier spent the first three months focused on rhythm in all three gaits. “Reefer has huge gaits so I had to be patient as he gained the strength and balance needed to carry himself.” An emphasis on these principles is key to developing a horse’s natural movement. “Once he had the strength, all the work was very easy for him. He is extremely straightforward and an absolute gentleman around other horses,” remarked Baier. During the fourth month, the training emphasis became suppleness and an introduction to light jumping. The remainder of preparation time was spent building more rhythm, suppleness and strength. Baier fondly recalls Reefer’s positive attitude and cooperative nature both under saddle and in the stable. “I delivered him to Oklahoma and was looking for a positive outcome based on what he showed to me during his time at my farm. I’m so happy Reefer was named Reserve Champion, he is an excellent horse.”

Good basics and admirable character were also key qualities in the winner. Fabian DSF was bred in Canada by Jennifer and Armin Arnoldt, and prepared for the test by his owner Martha Diaz at her Red Wind Farm in El Paso, Texas. Diaz has a small training business and breeds two of her own mares each year. She also trains and shows the Horses Unlimited mare Gitana HU, half-sister to Gallant Reflection HU. Diaz is experienced with young horses and was considering a new project when she purchased him on-line as a yearling. “I wanted a horse to bring up the levels. I was also looking for something I could use to live cover my own mares without having to travel several hours to do artificial insemination,” explained Diaz.  When asked about her expectations for the 70-Day Test, Diaz was hopeful and pragmatic. “I knew early on that Fabian was so smart, smart as a whip,” she described. “During the breaking process he was very kind and I hoped he would do well in rideability.” Fabian DSF did her proud by besting the field with the highest overall score in that category.

Fabian DSF will return to Diaz’s farm and begin his career as her dressage mount. “My plans for him are primarily focused on performance. He’s a blast to ride. He’s always looking for you to tell him what you want him to do.” Diaz also plans to breed her mares, and offer some breedings to outside mares. “Winning was a complete surprise. My only hope was that he would score a 90 or higher so that he was licensed for my mares.” Diaz has two weanlings by Fabian DSF and is expecting two more foals next spring.

Anne Sparks, owner of Horses Unlimited, is equally as enthusiastic about her four-year-old stallion and talks about him with much veneration. “Since Reefer was young, I knew he was special. When I decide to leave a colt intact, I have to have great confidence that they will be as good or better than their father.” The versatile New Mexican-bred colt certainly has a high standard to live up to. His sire, Galant du Serein, was a successful dressage mount for Hubertus Schmidt before being bought by Horses Unlimited and eventually making appearances in the Olympics, World Equestrian Games and FEI World Cup Finals.  “Gallant Reflection has always been a quick learner and his movement very natural. He has “schwung” and even though he isn’t the tallest horse, his gaits are very powerful. His has presence and exceptional elasticity and hang time in the air,” remarked Sparks. Gallant Reflection HU received the top mark of 10 for character as well as 9’s for temperament, constitution and willingness to work. “Reefer will now move on to the next stage in his life. He is licensed with several registries, including the RPSI and AHS and will be available for limited breedings to outside mares. “We will balance both his career as a breeding and competition stallion going forward,” explained Sparks.

Gallant Reflection HU will make the voyage to Wellington, Florida at the beginning of 2014. He will be partnered with Olympian Lisa Wilcox and begin his dressage career. Sparks and Wilcox successfully brought the Horses Unlimited-bred stallion Pikko del Cerro HU from National Young Horse Champion to Grand Prix winner. They are both enthusiastic about their next collaboration. When asked about her plans for her newest equine partner, Wilcox commented,  “I’m thrilled to see him come to my program in Florida. He is quite talented and feels like a second Cerro to me. I’m looking forward to riding him in the Young Horse Program this year and climbing the dressage ladder.” 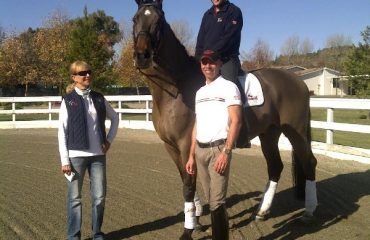 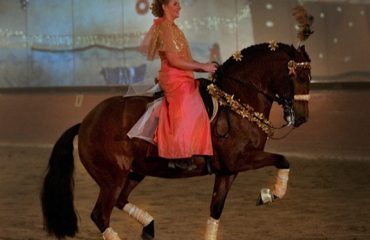 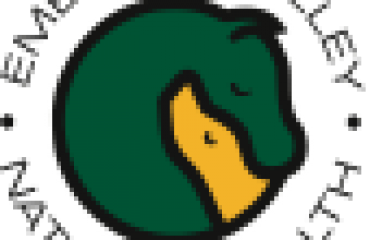