An Exciting Weekend at the Pin Oak Charity Horse Show

Four of the top 12 2012 Pin Oak Collegiate Invitational teams  –Texas A&M, SMU, Baylor, and California Fresno State – which were selected for the National Collegiate Equestrian Association (to be held next month in Waco, Texas) were represented at Pin Oak.  For more information and competitor bios, see pages 116-117 in the 2012 Pin Oak Charity Horse Show Program at www.pinoak.org and www.varsityequestrian.com. 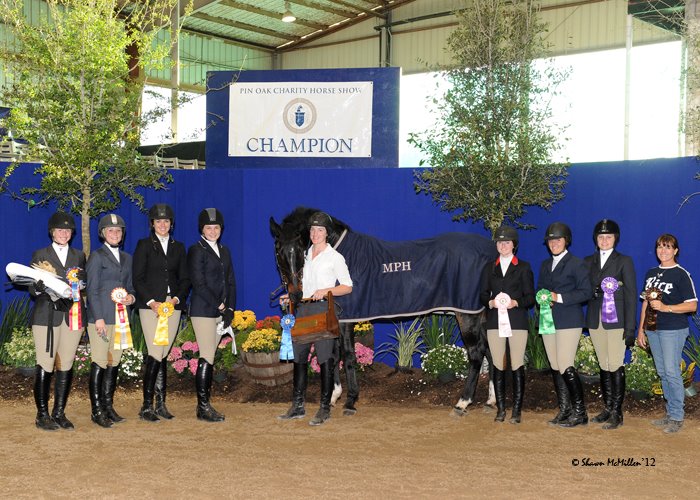 More about the collegiate invitational event

The Dragon, a jumper owned by Rita Herzog of Memorial Park Hunters, was named Best Horse of the competition. Other horses in the event included Dare to Imagine (owner/trainer Kim Cox of  Tally Ho Farm), and horses from Woodhill Farm  and Kings Bridge Farm.

The Pin Oak Champion Collegiate Rider was determined by a head to head format in which the riders compete over fences on the same horse. The riders only had a few minutes to warm up on a randomly drawn horse before competing. Horse owners and trainers generously donated the use of their horses for this event, which judged the riders’ form and ability rather than that of the horse.

Emily Gardener from SMU was the champion for the 2011 Pin Oak Collegiate Invitational event. 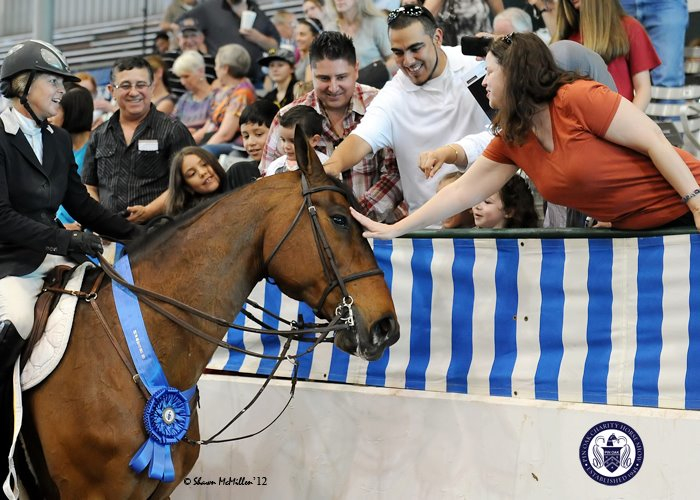 Centano gets some love from the crowd. Photo ©Alan McMillan.

The top six competitors of the 25 who entered the Grand Prix are listed as follows:

2. Triomff, ridden by Holly Shepherd of Grand Bay, Ala., and owned by Sarah Patterson from Omaha, Neb.;

4. L’Etoile, ridden by Wilhelm Genn of Lebanon, Ohio, and owned by The L’Etoile Group LLC of Lebanon;

5. Cicero 75, ridden by Erin Bruheim of Houston, Texas, and owned by Nordic Lights Farm LLC of Houston; and,

6. River of Dreams, ridden by Christian Heineking of Dallas and owned by Caroline Jahr of Dallas.

The Pin Oak Charity Horse Show opened March 21 and runs through April 1 at Great Southwest Equestrian Center located at 2501 South Mason Road in Katy, Texas.  The show, which started in 1945 and is one of the leading horse shows in the nation, has raised more than $5 million for children’s charities. Most events are free and open to the public. See www.pinoak.org for more information. 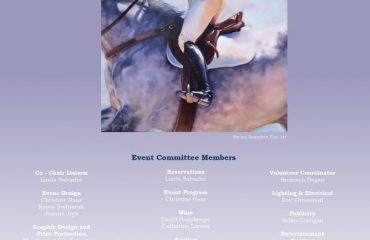 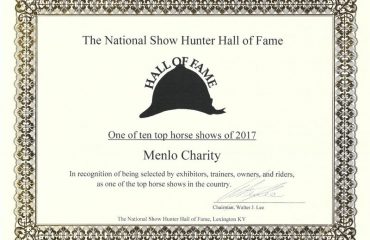