Wayne, IL – Competition finished up Sunday at the Lamplight Equestrian Center as the top 6-year-olds and developing horses in the U.S. vied for top honors in the Markel/USEF National Young Horse Dressage Championship and USEF National Developing Horse Dressage Championship sponsored by The Dutta Corp. and Performance Sales International. Additionally, nine competitors would ride for medals in the USEF Dressage Seat Medal Finals presented by Dressage Today in the 14-18 division.

The final day of these USEF National Dressage Championships got underway with the USEF Dressage Seat Medal Finals presented by Dressage Today. The strong field demonstrated solid fundamentals and poise under pressure throughout the entire class including the challenging pattern. The final three riders to demonstrate the pattern, which called for proficiency in transitions between gaits and the ability to lengthen and collect, would claim the top three spots.

All three riders were competing in their first USEF Dressage Seat Medal Finals presented by Dressage Today on borrowed horses. 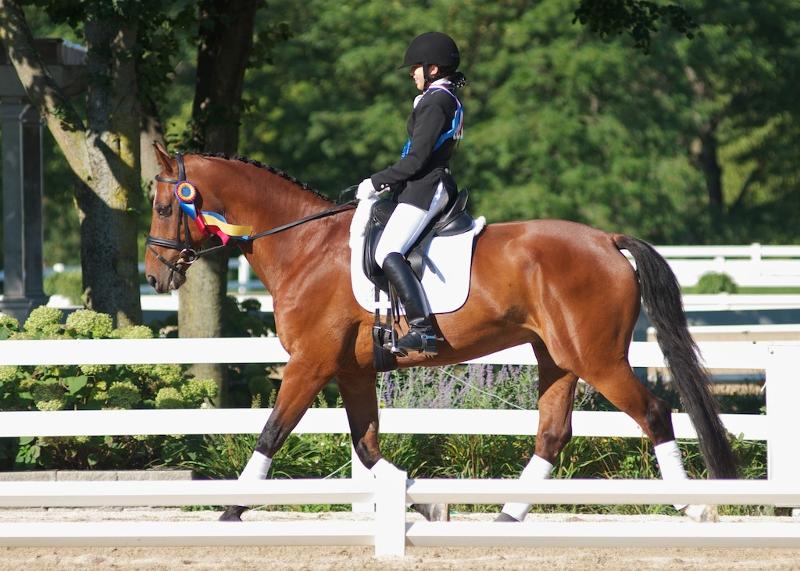 Marlena Kurz (San Antonio, TX) claimed top honors and the Gold medal riding Ode to an impressive 84%. Kurz was able to make the numerous transitions in the pattern look effortless by utilizing a soft and consistent contact and a correct seat.

Despite having only ridden Stephanie Fettig’s Dutch Warmblood since Tuesday, the 16-year-old was delighted with the gelding. “Even when he was tired he gave it his all, he was really with me the whole time. He’s a good boy I really enjoyed riding him.”

Silver medalist, Eleni Econopouly also is short on competition experience with Clair Glover’s big moving Welt Lady. The Rhinebeck, NY, native has only been riding the Hanoverian mare for a month and a half but was able to use the movements in the pattern to her advantage.

“The canter lengthening was hard but the transitions helped,” she said.

Econopouly used her quiet position to score a 82%. Finishing in third place and 3 points behind Econopouly was Macaulay Dukes, who earned a 79% on Ginna Frantz and Grand Prix Equestrian’s Annabella GP.

Dukes (Auburn, WA) displayed maturity in the face of some unfortunate circumstances. She not only began college a week and a half ago and flew to Illinois to ride in the Finals but had to contend with broken tack. Just before the class was set to begin, Annabella’s bridle broke. With quick thinking and the help of some duct tape and tying pieces of the bridle together, the pair was able to compete.

In her pattern, Dukes had a few bobbles but demonstrated a great amount of tact and a polished position throughout.

“My transitions were rough and have been a problem in the last two days and the changes over the diagonals were the toughest.” Despite these challenges, Dukes was very pleased with her horse. “She a fun mare, I want to take her home with me.”

The judging panel of Janet Foy, Christel Carlson and Michael Osinski was very pleased with the level of equitation displayed.

“We were all impressed with the quality of the class,” Osinski said. ” The top grouping was so strong; it’s great to see such strong positions. This is a great program and we all want to encourage it in the future.”

The USEF National Developing Horse Dressage Championship sponsored by The Dutta Corp. and Performance Sales International proved to be a showcase of both the U.S. breeding programs and the success of the Markel/USEF National Young Horse Dressage Program. Three of the horses that contested these Championships, including winner Pikko del Cerro HU, are U.S. bred, while seven are graduates of the Young Horse program. 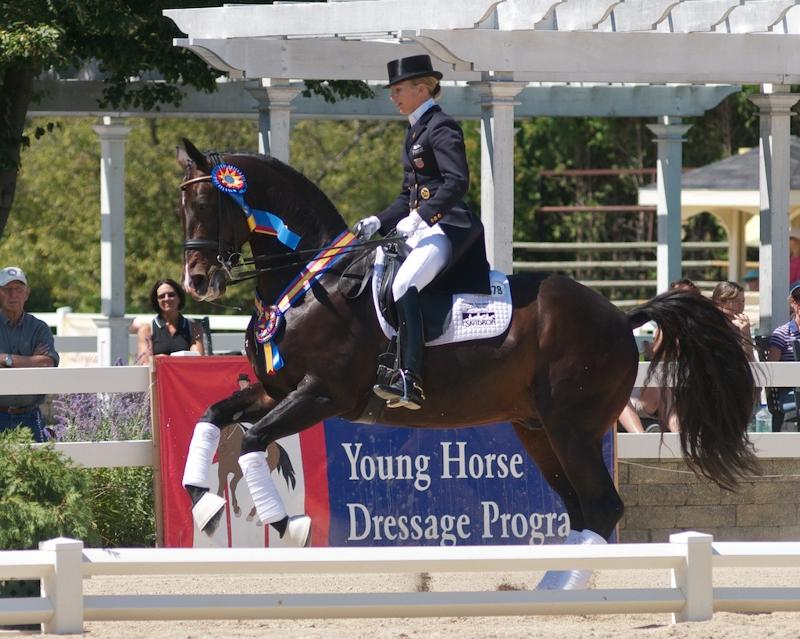 Horses Unlimited’s Pikko del Cerro HU (Pik L- Rohweena  by Rohdiamant) claimed the championship with rider Lisa Wilcox (Loxahatchee, FL) after earning an overall score of 70.482%. In today’s test which counted for 60% of the Championship score, the Hanoverian stallion again displayed the great ring presence he showed on Friday but appeared less settled in the Final Test resulting in a few miscues with Wilcox.

“I underestimated his condition, I didn’t have him on my leg today.” Of the horse’s added enthusiasm today, Wilcox said, “He was a bit squirrely.” They were the second-place finishers for today’s Final Test with a score of 70.686. They also were awarded the highest U.S.- bred horse award for their performance over the weekend.

“There is a lot of potential there; it’s just a matter of unveiling it,” she said. “There is a lot more trot and passage, he is definitely a Grand Prix horse.”

The winner of today’s Developing Horse Final Test was Pie (Worldly – World Lady by World Cup I) ridden by Caroline Roffman, who put in polished performance to score a 71.176%. Roffman collected Reserve Champion honors piloting her own Hanoverian gelding to an overall score of 69.653%.

Pie, who Roffman has had since he was 4 years old, has always been a bit of challenge – but the Wellington, FL,resident has kept at it because she believe the future shines brightly for him.

“He is very sensitive and emotional,” she said. “He has developed very quickly and shows a lot of talent for the future.” Roffman reflected about the Final Test, “Today he was a little tired which is out of character but he did everything I asked for.”

Third place in both today’s Final Test and the Championship went to Sharon McCusker and her own Wrigley (Son Deniro – Pinomia by Rohdiamont). The pair from Ashby, MA, scored a

70.196% in today’s test and earned an overall score of 69.205%. The Dutch Warmblood gelding demonstrated an expressive trot today and executed quality flying changes.

McCusker is ecstatic with the way the powerful horse has matured this year and performed over the weekend.  “I am thrilled with him. He has come on so well this year.”

The Final Test for Markel/USEF National Young Horse Dressage Championship 6-year-old division, again judged by McDonald, Zang and Barnett, was the final class of these Championships. And in a fitting end to fabulous weekend that showcased the best up-and-coming horses in the country, top honors were left up for the taking until the final horse of the day. 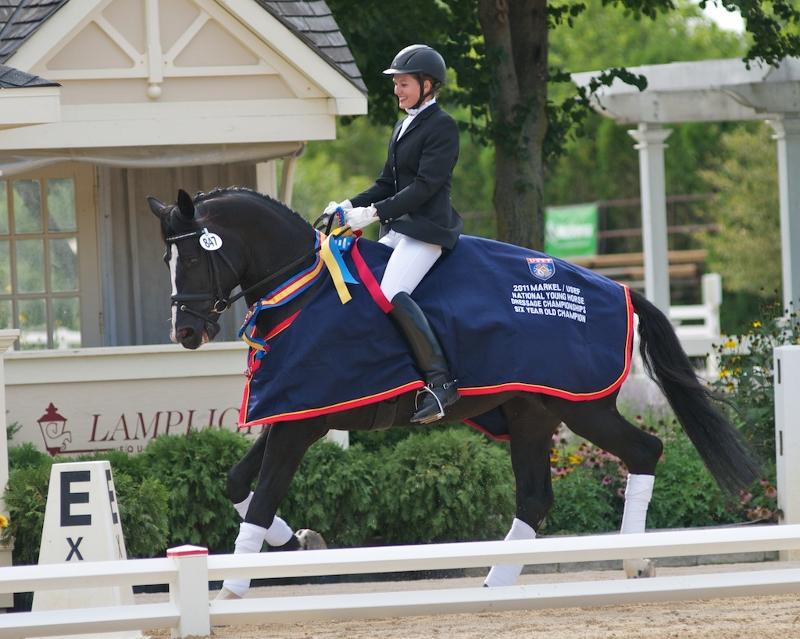 Emily Wagner and her own American Warmblood stallion Wakeup (Wagnis – Maiden Montreal by Macho), the winners of Friday’s Preliminary Test, were the last pair to compete. They trotted their way to third place in the Final Test scoring an 8.64, which earned them an overall score of 8.736. Four horses earlier, Roffman rode her own Bon Chance (Bellisimom – SPH Wintersong DE by Weltmeyer) to an impressive score of 8.88 in the Final Test. With scores from Friday’s test counting for 40% of the overall, Bon Chance finished on a score of 8.736.

After consolation of the rules and procedures, Wakeup was crowned Markel/USEF National Young Horse Dressage Championship for the 6-year-old division, as in the result of a tie for National Champion or Reserve Champion, the U.S.-bred horse prevails.

Wagner (La Cygne, KS) was pleased with her horse’s performance in today’s test, for which he earned a 9.0 for submission and 8.7 for General impressions.

“I was really happy with him,” Wagner said. “Today, the thing was he was tired. At the end of a five-day horse show, he was just lacking flair. His flying changes and half pass were great.”

For the third time in the week, Roffman claimed Reserve Champion honors.

“I am so happy, you don’t dream that will ever happen,” Roffman said. “I hoped to get one Championship or Reserve throughout the weekend. I am on cloud nine.”

Bon Chance, last year’s 5-year-old Markel/USEF National Young Horse Dressage Champion, displayed a ground covering walk, for which he scored a 9.2, and a phenomenal uphill canter which was rewarded with an 8.8. The canter score would have been significantly higher without mistakes in the flying change.

However, Roffman was elated with the Hanoverian gelding, who obviously loves the limelight of the championship stage. “He shows off, he loves to do this. He’s always fun to ride; ambitious, fun and spirited. He’s everything.”

Young Horse Dressage Championship 6-year-old division was awarded to Faye Woolfe’s Aesthete (Trento B – Unusual by Gribaldi), who earned an overall 8.728. Silva Martin (Unionville, PA) guided the lovely KWPN gelding to a score of 8.8 in the Final Test, earning them second place in today’s class.

The winner of the 4-year-old division in 2009, earned scores of 8.7, 8.8 and 8.9 for the walk, trot and canter respectively today and was rewarded for his expressive movement with a general impression score of 8.8. Martin was pleased with the horse throughout the weekend.

“He couldn’t have gone better,” she said, “I have a fabulous horse.”

Scott Hassler, USEF Young Horse Dressage Coach, has been involved with this program since 2005 and was extremely impressed with the week’s competition and the talent and diligence displayed. “There was no clear winner coming into the Championships. You really had to ride and work for it.”

Hassler also was supportive of the process to break the tie. “I think the rule where we pick the American horse over the European is the right thing.”

Wagner was also completely supportive of the program that allowed for horses to be scored closely, as it is a chance to recognize all the effort put in to training.

For news, results, video and photos from these Championships please visit http://usefnetwork.com/featured/2011USEFDressageNationalChampionships 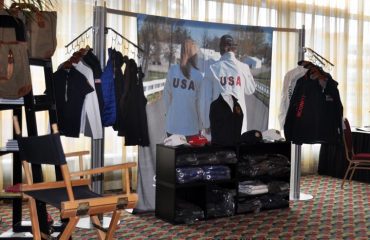 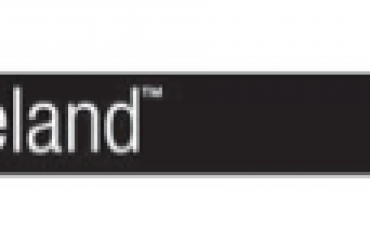