Lexington, KY – August 13, 2011 – The fifth day of the 2011 United States Equestrian Federation Pony Finals was warm and sunny as the Large Pony Hunter Over Fences kicked off the day in the Walnut Ring. For the third year in a row, For The Laughter claimed the Overall Large Pony Hunter Championship, this time with Meredith Darst in the irons. As the USEF National Hunter Pony Championships presented by Sallee Horse Vans came to a close, the Grand Hunter Pony Championship title was awarded to Darst and Enchanted Forest for their efforts in the Medium Pony Hunter division earlier in the week. The final event of the day was the Individual Pony Jumper Finals where Julia Curtis and The Waterboy jumped to the championship honors.

Earlier this week, Meredith Darst and Enchanted Forest, owned by Dr. Betsee Parker of Middleburg, VA, had an incredible performance in the Medium Pony Hunter division. They were in the lead going into the over fences phase and with a beautiful trip they scored the blue ribbon prize and were eventually presented with the Overall Medium Pony Hunter Championship. The Large Pony Hunters were the last to compete this week, but Darst and Enchanted Forest’s excellent effort prevailed and they scored the Grand Hunter Pony Championship. The duo was awarded the International Jumping Derby Perpetual Trophy, and also has the “Trip of the Show.”

“Enchanted Forest has been really good,” smiled 13-year-old Darst. “I started to ride him at the beginning of WEF. He has a huge stride, so I can go really slowly, but you have to sit up a little bit at the jump because he likes the gap. He has easy lead changes and his canter is very comfortable. Enchanted Forest has been there and done that, so he’s pretty made, plus he’s very pretty and moves very nicely.” 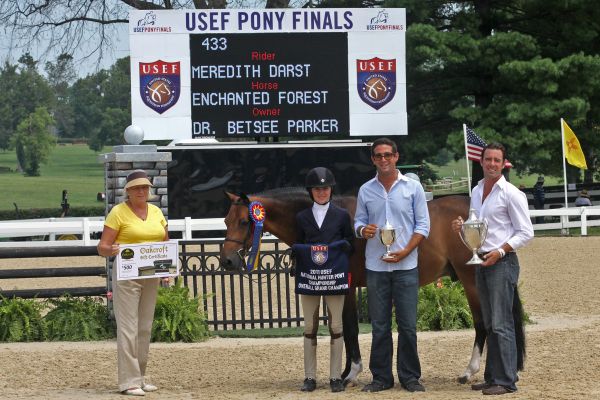 The main highlight in the Walnut Ring today was the Large Pony Hunters. Darst and For The Laughter, also owned by Dr. Betsee Parker, were the winners of yesterday’s Model and Under Saddle phases, and held the lead going into today’s competition. The pair had an unlucky rub at the first fence but still received good scores to place tenth in the final phase. Their consistent performance over the last two days earned them the Overall Large Pony Hunter Championship and the Pony Cross Perpetual Trophy, donated by Stephanie Abronson and Pony Cross Farm. This is For The Laughter’s third consecutive year to earn the prestigious title, having won it in 2009 and 2010 with Victoria Colvin in the irons. Darst and For The Laughter were also the winners of the Overall Grand Pony Hunter Reserve Championship.

“Today was a little bit stressful coming in on top,” admitted Darst. “I was the most nervous with his lead changes because I haven’t really figured them out 100%, so I just tried to land on the correct lead. I thought my round was really good except for my first jump. For The Laughter is really fun, he jumps really well, and he has a really nice stride. He’s quiet, you just have to keep him in front of your leg. I feel like I focused better with the pressure we had today.”

Trainer Scott Stewart added, “Meredith rode great all week, very consistent and obviously had a great week. It is so nerve-wracking going at the end of everybody, but she does great under pressure, it definitely helps her. She is very fortunate to have such excellent mounts thanks to Dr. Betsee Parker. She knows all of the ponies very well.”

Darst concluded, “It’s really exciting to have done so well this year at Pony Finals. I was pretty confident with all of my ponies. I knew that as long as I didn’t mess up we would be pretty successful.”

The winner of Saturday’s Large Pony Hunter Over Fences was Daisy Farish and All The Best, owned by Katherine Strauss of Southampton, NY, who earned scores of 87, 85.5, and 87. Their solid performance also earned them the division’s reserve championship honors. Maria Yzerman of Bloomfield Hills, MI, and Center Ice took home the second place prize with scores of 86, 87, and 85, while Madison Maners riding Love and Laughter, owned by Victoria Pres of New York, NY, received scores of 84, 82, and 84.25 to earn the third place award.

This evening, participants gathered at the Covered Arena for the Awards Ceremony where the week’s top finishers were honored once again. The awards included the Best Turned Out Regular Pony, which went to Little Black Dress and the Highest Scoring Auction Pony, Salvandi Coronet. The Buttons N’ Bows Sportsmanship Trophy went to Emily Regan, while Scott Stewart received the Emerson Burr Perpetual Trophy, which is awarded to the trainer of the Overall Grand Hunter Pony Champion and was donated by the 2000 Hunter Pony Committee. The High Score State Team was Virginia and they received the International Challenge Trophy. All three ponies were entries of Dr. Betsee Parker and included Elation, Enchanted Forest, and For The Laughter.

The last event today was the Pony Jumper Individual Finals where Julia Curtis of Villa Rica, GA, managed to conquer the competition with her third clear round aboard The Waterboy. The pair earned the USEF Individual Pony Jumper Gold Medal and led the final victory gallop.  With the only fault free score after all three rounds of competition Curtis was also awarded the Swan Creek Farm Perpetual Trophy donated by William J. Moroney in honor of Alvin and Patsy Topping. After advancing to the jump off with just four faults from the weekend Noah Buehler of Wall, NJ, and Porsche won the Silver Medal with a clear round in a time of 33.508 seconds. The Bronze Medal went to Sarah Walker of Dallas, TX and La-Ti-Da, who had four faults going into tonight’s Finals and laid down a clear trip in the jump off breaking the beam at 32.928 seconds.  ”The Waterboy came out and he was perfect all week. I can’t say enough good things about him. I definitely was a little nervous today, but he has always been there to support me throughout the courses,” noted Curtis. “He has just been perfect every day. It is heart pounding and amazing to win this.”

The 2011 USEF Pony Finals will come to a close tomorrow following the Equisport Insurance/USEF Pony Medal. The nation’s top pony riders will gather in the Covered Arena tomorrow to vie for the coveted winning title. 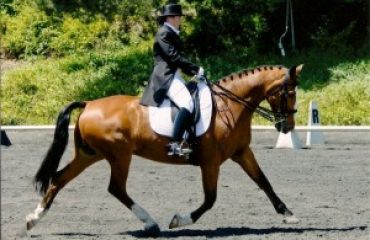