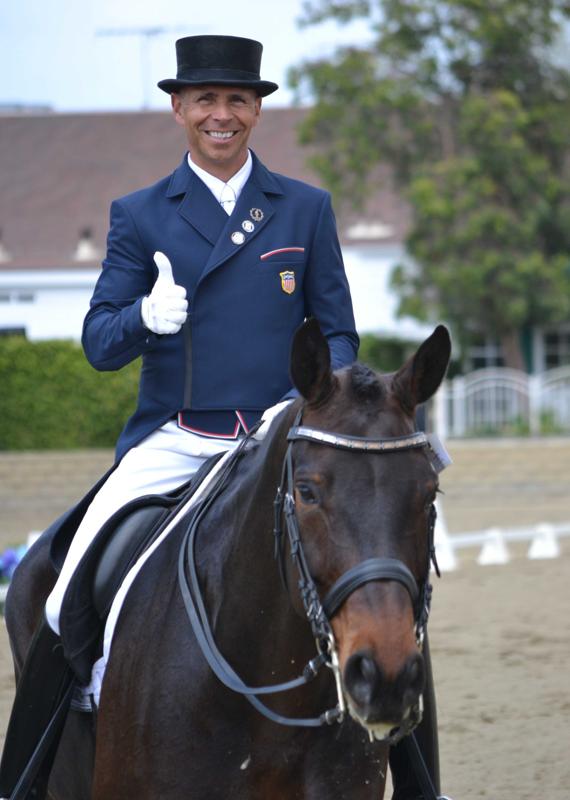 BURBANK, CA – In sunny California, the competition for a coveted spot on the U.S. and Canadian Pan American Games teams heated up during the Festival of the Horse CDI-W/Y/J, held March 31 – April 3, 2011 at the Los Angeles Equestrian Center in Burbank.  Despite a large and talented group of international competitors, there was no stopping Steffen Peters with what the judges deemed his new “super horse”, “Weltino’s Magic”.  Peters and Jen Hlavacek’s nine-year-old Westfalen gelding (Weltino x Diva by Diamond Boy) swept the small tour with impressive scores of 75.395% in the Prix St. Georges and 77.237% for the Intermediaire I, and debuted their new freestyle to a score of 79.417%.  “The first word that comes to mind is ‘fun’,” says Peters in describing the weekend’s rides.  “He’s really a pleasure to ride, so supple and forward now, it’s like that feeling that I get from Ravel.”  On Peters’ heels throughout the competition were Guenter Seidel and “Sundayboy” (Dutch Warmblood gelding by Kennedy, owned by Richard and Jane Brown), who earned second-place finishes in both the Prix St. Georges and Intermediaire I; as well as Freestyle runner-up Jan Ebeling and Anne Romney’s “Sandrina” (Oldenburg mare by Sandro Hit x Stutbuch by Ganymed).  “There are really nice horses here on the West Coast,” noted judge Cara Whitham (5* CAN).  “While I haven’t seen every single horse out there, at this point and from what we saw this weekend it looks like it may be a U.S. team of gentlemen riders going to Guadalajara for the Pan Ams.  It’s very strong out here.  But it is still a long while until October.  We’ll see!”

In the Grand Prix division, Jan Ebeling and his long-time partner “Rafalca” competed in this CDI as a final preparation for their participation in the upcoming Reem Acra/FEI World Cup Dressage Finals in Leipzig, Germany, and came away not only with solid scores but growing confidence in their performance.  “She’s gotten so much stronger and better this year, and she’s taken it to a whole new level,” said Ebeling of the 14-year-old Oldenburg mare (Argentinius x Ratine by Rubinstein I,  owned by Amy Ebeling, Ann Romney, and Beth Meyer).   “She felt awesome!  She’s finally come into her own now.”  The ground jury agreed, rewarding the pair with a score of 69.298% for the Grand Prix and 73.025% for their difficult freestyle routine.  “Rafalca is much more confirmed, consistent and at ease throughout her test than we’ve seen her before,” noted Whitham.

In the Grand Prix Special, Shannon Peters claimed the win with Four Winds Farm’s Dutch Warmblood gelding “Odyssey” (Ferro x Gerina by Zebulon) with a 64.208%.  “The feeling he gives me is so amazing,” said Peters.  “He always tries so hard, and gets better and better with each test.  That’s all I can ask for.”

Judge Linda Zang (5* USA) was pleased with the quality of horses and riders presented in the large tour.  “Once again, we’re starting to see a strong group of Grand Prix horses starting to emerge from the West Coast, and this makes us very happy to see,” said Zang.  “These horses are going in the right direction with correct riding and attitude.”

In the CDI Young Rider division, three riders shared wins during a weekend of strong competition.  Brandi Roenick rode her own “Pretty Lady” to top the scoreboard with 66.974% in the Young Rider Team Test, while Mackinzie Pooley and “Jonkara” earned the win in the Individual Test with 66.053%.  Jamie Pestana rode her own Hanoverian gelding “Winzalot”  to the Freestyle victory with a score of 67.250% to close out the Young Rider division.  For Juniors, Canada’s Colby Dodd claimed the win in the Team Test while Rison Naness and “Kingsley” topped the Junior Individual class.

Markel/Cornerstone High Point Winners were once again presented in four divisions.  In the FEI ranks, Steffen Peters and “Weltino’s Magic” were presented with the champion’s dress sheet, while in the Open division Jess Havey rode “Springsteen” to the win.  For Adult Amateurs, Cherie Vetsch with “Baas B.” claimed the title, and Mackinzie Pooley with “Starlet M” won the Junior/Young Rider division.

With the generous support of sponsors, a wide array of activities for both exhibitors and spectators were available free of charge.  Thanks to the Lisa Seger Equine Insurance Agency, “The Retreat” hospitality area was once again a big hit with competitors, and “Mastering Good Horsemanship” seminars with noted speaker Gil Merrick were available during the weekend.  In addition, LA Saddlery and Prestige Italia’s Roberto Rasia held a wine and cheese reception for competitors and presented Steffen Peters with a new Prestige saddle as winner of Saturday’s CDI Intermediaire I class. 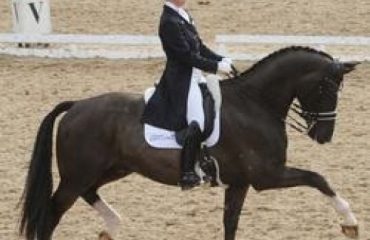 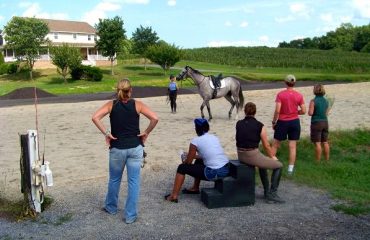