Roldan Returns, Leads Longfield Into Semifinals Of The Memorial by Piaget On Opening Day At Grand Champions Polo Club

WELLINGTON, FL-May 22, 2013—After being sidelined for two weeks with a rib injury, Nic Roldan returned to the playing field for the opening round of The Memorial by Piaget at Grand Champions Polo Club.

The eight-goaler from Wellington scored a game-high ten goals to lead Longfield to a 12-10 come-from-behind victory over Palm House on Wednesday in the tournament’s first single-elimination game. 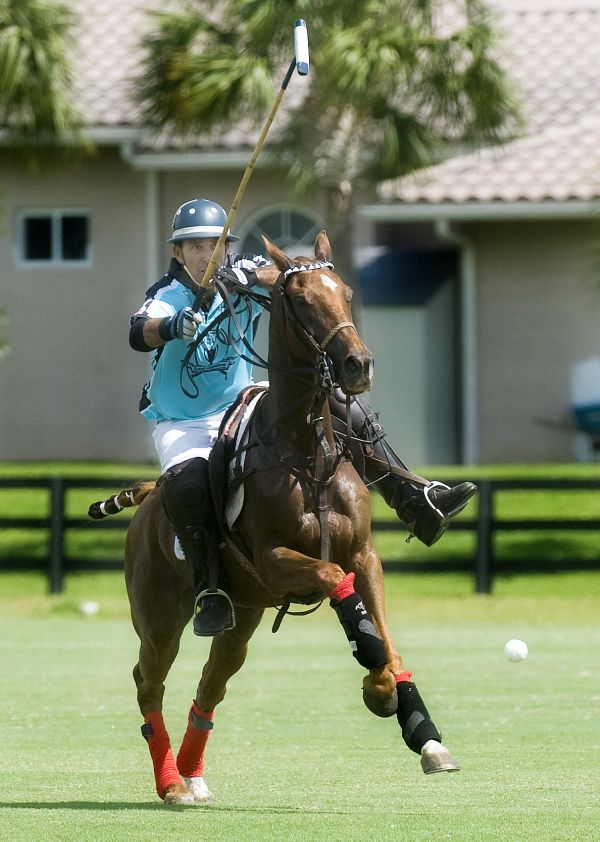 Longfield advances into Friday’s semifinal round against Inner-Continental, which received a bye in the opening round, at 5:30 p.m. Palm House will play in the subsidiary on Sunday.

On Thursday, Audi Polo Team plays ELG at 3:30 p.m. in the other opening round game.

Still not at full speed after fracturing two ribs ten days ago, Roldan played well enough to spark Longfield’s rally late in the fourth chukker overcoming a three-goal deficit to go ahead 8-7 at the end of the chukker. 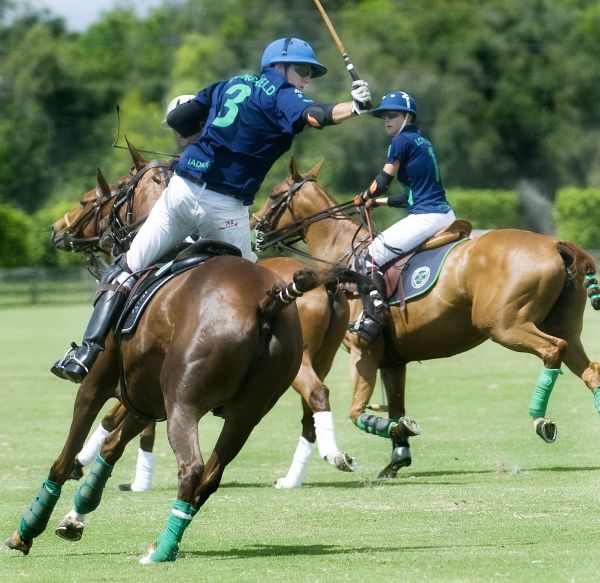 Longfield’s Tommy Collingwood (3) goes for the big back hand with teammate Hannah Buchan (1) helping out on defense. Photo by Scott Fisher

“We missed a lot of goals in the beginning,” Roldan said. “But I knew at some point we would come back. We just played it patiently, listened to each other and did what needed to be done.”

Roldan worked his scoring magic again early in the sixth chukker scoring back-to-back goals for an 11-8 lead with 5:05 and never relinquished the lead.

It was Roldan’s first time back on a horse after his rib injury.

“I have been taking all the right precautions and doing my physio twice a day,” Roldan said. “This is the first time I’ve rode in ten days. I was a little cautious and little skeptical how I would feel, but I feel fine.”

“I just wanted to stay as cool as possible,” Roldan said. “I didn’t want to force it, sort of do my thing and try to let my teammates play more and me sit in the back.” 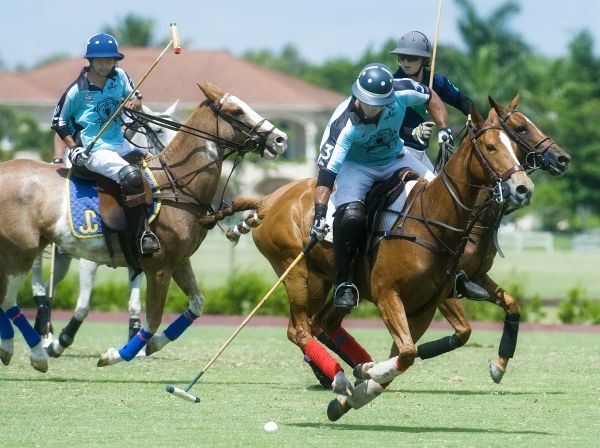 Biddle robbed Gonzalez of his first goal in his Grand Champions spring debut after the Polo Park Middle School eighth grader had a nice breakaway run after the throw-in working both sides of the horse. Biddle just cleared the goal attempt away from the goal line.

Earlier in the game in the second chukker, Gonzalez had a scoring opportunity after a nice run but hit the goal post. 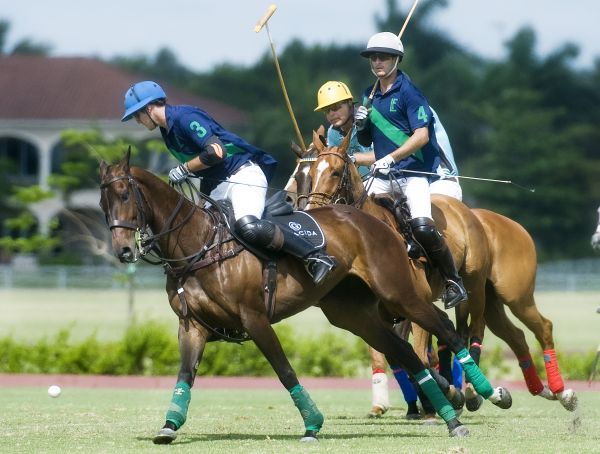 “This was a lot of fun playing with Nic Roldan, one of the best players,” said Gonzalez, who also plans to compete in Monday’s juniors tournament at Grand Champions. Gonzalez has been rated at 2 goals beginning June 1st.

“When I was with the kids I was at the back teaching them,” Gonzalez said. “These players I am playing with today are teaching me. It’s great to play with amazing horses and players. I learn a little bit more every game.” 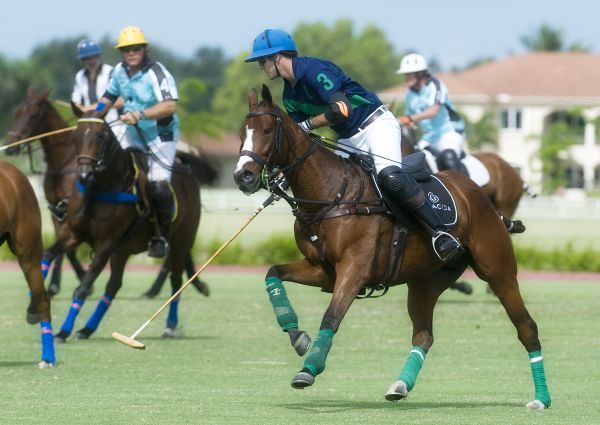 Palm House (Tommy Biddle, Joey Casey, Carlos Diaz, Glenn Straub) was led in scoring by Biddle with eight goals. Straub and Diaz each had one goal.

Palm House jumped out to 5-2 lead early in the third chukker but was unable to shut Roldan down.

“It was great to play with two young players like Matias and Tommy, I loved it, it was amazing,” said Roldan, who won the U.S. Open at age 15. “It’s great to see them progressing day-by-day. They are really good players.” 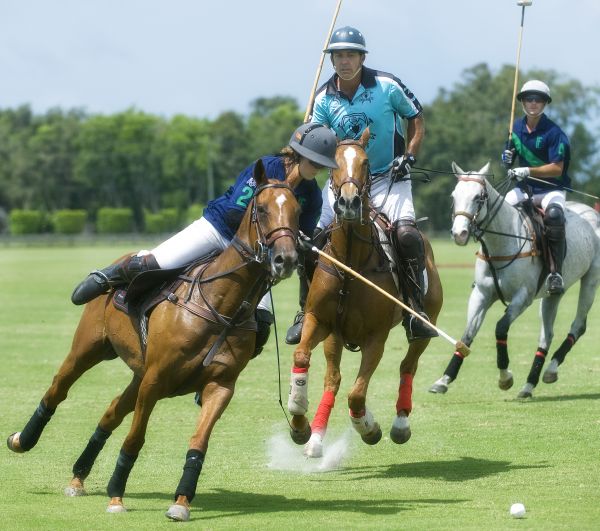 Fourteen-year-old Matias Gonzalez (2) of Longfield leans out of his saddle to retrieve the ball with defender Tommy Biddle (3) of Palm House closing in and Longfield teammate Nic Roldan (3) looking on. Photo by Scott Fisher

Six 12-goal rated teams are competing in the spring season-ending four-day tournament that continues on Thursday.

The games are free and open to the public. 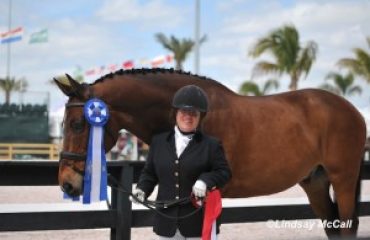 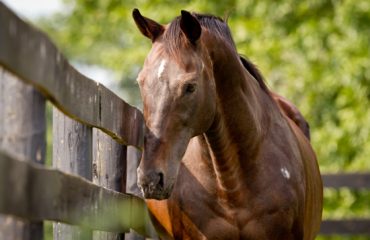