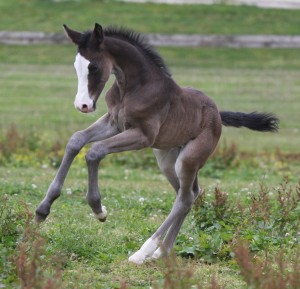 Devon, PA (July 24, 2012) While many keep up with the real-life sagas of the Kardashians, it’s a bit harder to follow the early days of a foal bred for stardom in the show ring. Coeur Dashian is an Oldenburg filly, a horse breed that originates in Germany. She came into the world on April 26, beside her mother, Starling, a Hanoverian mare at High Point Hanoverians in Chestertown, Maryland. Her sire, or father, is Coeur d’Amour, a Hanoverian Stallion. Larissa Barilar and Klaus Schengber, who co-manage breeding at High Point, have high hopes that Coeur Dashian will dazzle the judges at the Dressage at Devon Breed Show, the largest horse breed show in North America, which runs from Tuesday, September 25 through September 27, followed by the Performance Division running from September 27 through September 30. We’ll be following her as she progresses towards the show.

Given that Starling is a stunning jet black mare and Coeur D’Amour has only a small star and snip on his nose, onlookers were surprised when the filly turned up with a blaze that starts in a peak just below her ears, and splashes boldly across her face and nose. But it’s not only her dramatic good looks that have the High Point team excited, it’s how she floats effortlessly alongside her mother in the field with ground-covering, elastic, balanced strides. Because of this combination beauty and grace, High Point farm management chose her out of the crop of nine babies as the farm’s “Devon foal” to represent them at Dressage at Devon.

The name Coeur Dashian started as a bit of a joke, but after awhile it seemed so fitting that it just stuck. After all she causes heads to turn when she trots by, has a beautiful black coat, is perfectly proportioned and Larissa Barilar hopes that “one day she’ll be famous.”

Of course, given her breeding, the High Point team expected a special foal. Her father, 8-year old Coeur d’Amour, was bought at auction in Germany and imported in 2010. This stallion was second at his 30-day test which evaluates a young stallion’s character, temperament, willingness to work, athletic ability, gaits, ride-ability, and jumping ability. The objective is to determine a stallion’s capacity to improve the sport-horse characteristics through breeding. He also proved his jumping talents by winning 28 out of 30 M level competitions, where horses jump fences over 4 feet high. Many horses with this level of talent and energy are challenging to ride. However, in between Coeur D’Amour’s show-ring accolades he was docile enough to be ridden by the owner’s 9-year old son, Hendriek Rode, proof that Schengber is correct when he claims, “he’s an absolute sweetheart.” 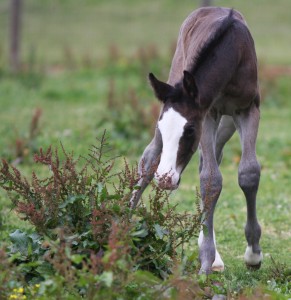 Coeur Dashian is one of about 80 horses and foals scattered across the fields at High Point. With a spring foaling season that brought nine foals into the world and led to sleep deprivation forHigh Point staffers, they are not ready to truck out to shows until late summer. In the meantime, Coeur Dashian is able to do what foals do best—frolic in the field with her foal friends and grow strong under her mother’s guidance. As Barilar watches Coeur Dashian in the field, she sees the marks of a horse that’s going to give someone a good ride. “She’s very athletic, beautiful and it looks like she’s going to be really fun to ride. I can tell by watching her in the field and how she acts with her friends. She likes to run around and buck. She’s very active,” she says.

Also, from day one, human handling is part of Coeur Dashian’s life. She’s put into a halter to be led out to the field every day. Her feet are picked up and she’s brushed. It all helps to assure that she grows into a horse that’s not only feast for the eyes and a joy to ride, but also is easy to handle and pleasant to be around.

All this is baby stuff compared to what happens in late July—that’s when she’s clipped which requires buzzing over her whole body with horse clippers. Say ‘goodbye’ to the current “ woolly mammoth” hair style Schengber describes and ‘hello’ to a sleek new do. Just as Kim Kardashian looks best with shiny black hair, Coeur Dashian is most eye-catching in her natural black. Once she’s clipped, the sun threatens to bleach out her color in just a couple of bright summer days. So it’s time to switch her schedule so she grazes and plays in the moonlight and rests by day in her stall.

This ensures Coeur Dashian’s coat will look like inky black velvet for the Oldenburg inspection on July 25. This is when the Oldenburg Horse Breeders Society checks her out to assure she fits their breeding goal. They evaluate her breeding, movement, how well she’s put together and the overall impression she makes.

In the dog days of August it’s time for Coeur Dashian’s first road trip to the Virginia Dressage Association (VADA)/Nova Summer Breeding Show on Saturday, August 11 and Sunday, August 12. This is her first chance to strut her stuff in the show ring. And it’ll likely be her only preparation before the big show in September, Dressage at Devon, where she will face competition from across North America.

For those who followed the development of another black Oldenburg filly last year, Shilhouette, she is now owned by Vicki Sher, who feels lucky to have acquired a foal bred by Maurine Swanson of Rolling Stone Farm, in Slatington, Pennsylvania. She is living the good life in a large field in Lancaster County with five filly playmates and the requisite nurse mare to babysit. There’s plenty of room for her to kick up her heels and do what she has shown she does well—play. She can also luxuriate in two roomy run-in sheds when she doesn’t fancy the summer suns or winter winds. She plans to give her plenty of time to grow up before starting to ride her in her fourth year.

Make plans now to see Coeur Dashian and the Breed and Performance Show at Dressage at Devon. Reserved seating is available at http://dressageatdevon.org/shop/ and general admission tickets will be available at the show grounds for $10 each from 9/25/12 to 9/30/12.

Dressage at Devon (www.dressageatdevon.org) has been the premier North American Equestrian event since its founding by the Delaware Valley Combined Training Association in 1975, and became a separate organization in 2006.  It combines world class dressage competition and the world’s largest open breed show with the international Fall Festival show and special activities for the entire family.  The six-day event attracts hundreds of horses from around the world and thousands of spectators. 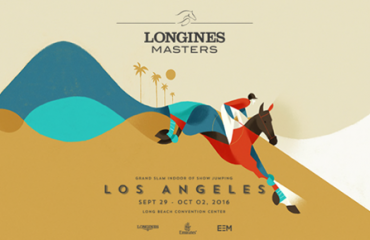 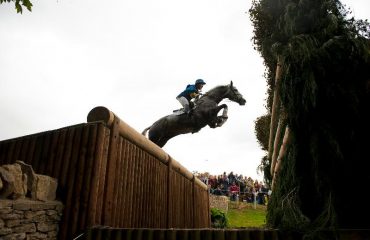