Who is the Most Beloved Equestrian Athlete in America?

The clock is ticking. The buzzer sounds. Can you prove it? Actually, you can. All it takes is a $5 gift to The EQUUS Foundation and you’ll be able to “play favorites” in the nationwide fundraising effort “America’s Favorite Equestrian.” The EQUUS Foundation and the United States Equestrian Federation (USEF) jointly launched the charitable mobile texting game in celebration of the 2010 Alltech FEI World Equestrian Games and the eight international disciplines represented on the field of play. Now both organizations announce the expansion of the program through 2011, including multiple rounds and eliminations. The EQUUS Foundation has also pledged to award a minimum of $10,000 in grants in support of USEF programs within these eight international equestrian disciplines. The discipline generating the greatest number of votes will receive an additional $5,000 grant award for its USEF-affiliated association. 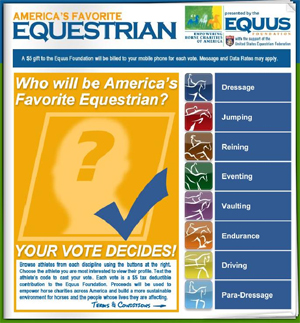 Visit the link at http://equusfoundation.org/vote. For a $5 contribution, you can select your favorite equestrian (listed by discipline) and follow the instructions provided to use mobile texting to vote. After texting your vote, you must reply YES to confirm your vote and $5 donation.

If you want to cast more than six $5 votes in a single month ($30) using your cell phone, a credit card will be required. Please review the separate instructions listed on each equestrian profile. You can also vote using an online form or vote by mail. All donations received by the EQUUS Foundation will be used in support of charitable causes.

Round 1 – Voting ends March 31, 2011. In each featured discipline, the six equestrians with the most votes will continue to Round 2.

Round 2 – Voting ends May 31, 2011. In each featured discipline, the five equestrians with the most votes will continue to Round 3.

Round 3 – Voting ends on July 31, 2011. In each featured discipline, the four equestrians with the most votes will continue to Round 4.

Round 4 – Voting ends on September 30, 2011. In each featured discipline, the three equestrians with the most votes will continue to Round 5, the final round.

Round 5 – Voting ends on October 31, 2011. America’s Favorite Equestrians will be selected based on the athletes with the highest number of votes recorded in each of the eight disciplines.

The athlete from each discipline with the most votes will join the ranks of America’s Favorite Equestrians. These winners will be announced in November 2011 at the National Horse Show, taking place at the Kentucky Horse Park in Lexington, KY.

The objective is for America’s Favorite Equestrian to be an ongoing program with all equestrian disciplines/breeds represented and the winners recognized in a permanent “Hall of Fame”. For this inaugural program, the disciplines competing in the 2010 Alltech FEI World Equestrian Games were selected for the program, with the many of the equestrians selected by the respective Recognized Affiliates of USEF. 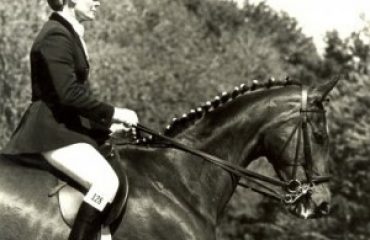 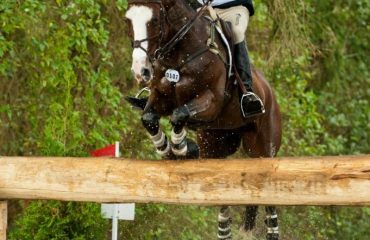