This is a turning point for Kate Bundy, who has had major successes in equitation over the years. She came up through the ranks during grammar school with her ponies Manhattan Tails and Biloxi Blue. Now 18 and a college student, Kate reflects on her riding career as she looks ahead to becoming an amateur.

You once said that you admired Hillary Dobbs because she managed to balance her studies at Harvard with a Grand Prix career. Now you’re faced with a similar challenge, being a college student and competing on the circuit. How is that working out for you?

College is way more difficult than high school ever was! I’m fortunate that my college, Colgate, is very supportive and has a great advising system so I never feel behind. I stay in shape by riding twice a week on the Colgate IHSA team and ride my horses on the weekend. Colgate has a great athletic program, so my professors are very understanding about absences and the dedication riding requires at this level. I tell them ahead of time when I have a show coming up, and we work it out. My friends are great, too — there’s always someone who will share notes with me when I miss a class.

Tell us about your horses.

I have two equitation horses that I show consistently: Leo is mine, and Cocopop is owned by my trainers, Missy Clark and John Brennan. Leo’s show name is Levkoi. I’ve had him for about three years, and I know him so well. He’s such a character! He’s a dapple-gray Holsteiner, and definitely knows he’s beautiful. Although he can have an attitude, he’s also very affectionate and likes to give kisses. He’s so special to me because he’s the first horse I really became competitive with and the first I ever ribboned with in a final. We were fourth in last year’s Maclay final. We’ve really grown together.

Cocopop is a bay Holsteiner gelding. He’s a complete veteran to the equitation and I’m so grateful that I’ve had the opportunity to ride him my last year as a junior. This September we won the ASPCA/NHSAA Maclay Regional Championships together at the American Gold Cup. Coco is such a cuddle bug, and always wants treats — he’ll dig in your pocket to see if you have anything. He’s very nosy. If anyone walks past his stall, his head pops up. He has to know everything that’s going on.

What have you learned from Leo and Coco?

I get different things from each horse. With Coco, you have to set a good pace and once it’s set, he stays in that rhythm. He has taught me to be light on the aids and to do my job while not interfering with his. They both prefer a soft ride with light aids. Leo goes best out of the forward ride and I also have to make sure to set my pace with him. I’m planning to bring them both to Lexington for the CP National Horse Show.

Kate and Cocopop at Devon
Photo by The Book LLC

What do you like about the CP National Horse Show?

The National is such a special horse show. The ring is always pristine, and the show attracts such an enthusiastic crowd. It’s a great show to compete in and just as interesting even if you’re just there to watch. You have ample opportunity to watch the best of the best compete. The night before the Maclay finals you can see Beezie Madden or even McLain Ward ride off against someone like Kent Farrington in the Grand Prix. It’s so exciting!

Is anything special for you this year about the CP National Horse Show?

Yes. It’s sort of bittersweet because it’s my last ride as a junior. As of December 1st, I’m an amateur. I want to give it a good last run in Lexington and do my personal best. I’m sad that I have to leave eq — that world has become so close to me. I love equitation, and it’s so important for everyone as a rider. It’s not just about how pretty you ride, but also about how well you work with your horse. You have to be smooth and soft while being efficient and productive.

How did you learn those skills?

I train with Missy Clark and John Brennan at North Run in Vermont and Florida. North Run has a strong emphasis on horsemanship. I love that. It’s so much a part of the learning experience. You have to know every detail of our horses because it makes you a better rider. I feel so comfortable with both Missy and John. We’re always working on something different to better our riding. Missy is very fair; I love that she looks at you and your performance and how you’re doing at that moment, it’s not just about what your name is. You’re never just coasting through. 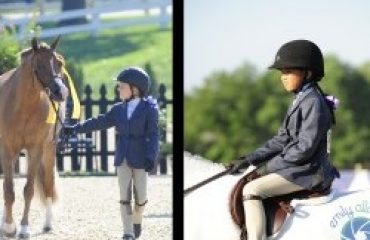 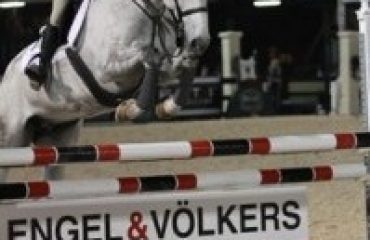 On catch riding, @nickisimpson74 says: "What I le

Judgement ISF, Crown, was the horse of a lifetime.

Pediatric cancer: Anyone would wish it didn’t ex