The Kelpies — by sculptor Andy Scott
Photo by Graham Wylie

Magnificent! That’s one good word to describe the Kelpies, two horse heads rising 30 meters (98.42 feet) into the sky in central Scotland. Native-born sculptor, Andy Scott set off on a wild ride in 2006 to bring his monumental artistic vision to life and, over the course of eight years, overcame all sorts of challenges including design, finance and engineering. As Andy often says, “I can’t tell you the amount of blood, sweat and tears I’ve put into the Kelpies.” They were his labor of love, fueled by passion — and they’re glorious.

The idea for the Kelpies came to life originally on a kitchen table in Amsterdam where Andy started sketching while discussing his vision with the architect who became his wife and staunchest supporter, Hanneke Scott-van Wel.

“There are many challenges to creating large public artworks, and the Kelpies were particularly fraught at times,” said Andy. “We had to move a very busy highway and put it back again in order to create the canal environment for the Kelpies, and that was just one challenge. The political and financial challenges of the project gave me moments of doubt when, to be honest, I thought I was going to walk away. At those times it was absolutely my wife Hanneke who kept me focused, told me to calm down, take a breath, take a vacation — whatever, and think things through. She was my rock when times got tough.”

In April 2014, the Kelpies opened to the public at Helix Park in Fallkirk and, in their first year alone, attracted nearly a million visitors. Crafted in structural steel with stainless steel coating and hollow cores, each one weighs 300 tons and sits atop a 1,600-ton foundation. That they seem to vibrate with energy is an intentional design element on Andy’s part. After the first maquettes — the term for a sculptor’s small preliminary model — he wanted the horses’ heads to appear to flow and he changed the lattice-like arrangement of steel plates so they all moved in one direction.

“I never doubted my artistic vision — I had the Kelpies in my mind’s eye from the first sketches and maquettes, and I needed a strong artistic vision to navigate the challenges in realizing such large-scale sculptures in a small town,” said Andy. “It took a very big ‘can-do’ attitude and an amazing team to make them look like that, and I’m grateful to them all — the fabricators, structural engineers and others — for buying into my vision from the start. On a very personal note, my father was from Fallkirk, and there was a real sense of legacy for his memory that kept me focused on my vision.”

The Kelpies, one of the UK’s tallest pieces of public art and certainly the largest equine sculptures in the world, reign supreme at the eastern entrance to the Forth and Clyde Canal in the 740-acre Helix Park, Scotland’s newest tourist attraction in Fallkirk. Like sentinels standing guard over the canal, the Kelpies are visible to motorists on the M9 highway and to anyone who happens to be boating or enjoying the park. The Kelpies are majestic and magical, a very modern reply to the legendary prehistoric chalk horse at White Horse Hill in England.

Andy with Baron, one of the model horses for the Kelpies
Photo by Martin Shields

Andy’s work is even more amazing because he isn’t a horse person per se. He was greatly influenced by his father, an architectural draftsman with a passion for the architecture in Glasgow. Andy lacked the math to study architecture, but he was always drawing, an activity his mother encouraged from the time he was very young. It was his mother’s side of the family tree that contributed the horse genes, which found fertile ground among Andy’s artistic talents.

“My maternal great-grandfather, whom I never met, worked with draft horses, but I only discovered the association with horses once I’d started sculpting them,” said Andy. “I like to think he might be looking down and approving of my efforts. I have always been fascinated with horses, and the heavy horse was, at one time, the driving force in industry until after the Industrial Revolution. Scotland has a history of working horses and they used to pull the barges along the nearby Forth and Clyde canal, where the Kelpies are now permanently situated.”

Andy works primarily in steel and bronze. He first started working with steel as a component but not as the main material in his sculptural projects while he studied at the Glasgow School of Art. In 1997, Andy gained recognition with the Heavy Horse, an early outdoor monument to Scotland’s draft horses in galvanized steel that stands 15 feet tall on the east side of Glasgow, next to the westbound side of the M8 Motorway that leads to Edinburgh.

“In 1996, I submitted my design for the Heavy Horse to a limited competition sponsored by Glasgow’s regeneration committee,” said Andy. “I guess they saw something in my sketches. The Heavy Horse brought my abilities as a sculptor to a wider audience. It allowed me to take a first step in building an ongoing portfolio of larger-scale public works. The Heavy Horse not only gave clients confidence in my abilities, but also confidence that well-executed artworks can bring wide rewards and would be worth their investment.”

Andy relied on many photos and anatomical references for the Heavy Horse. When it came to the Kelpies, he wanted “the real McCoy.” He ended up with two large quadrupeds with feathers on their lower limbs that modeled for him at his studio.

“The Glasgow City Council maintains Clydesdales at their stables in Pollok Country Park where they are a popular tourist attraction, and the Council generously transported two to my studio for the day,” said Andy. “Barron and Duke were accompanied by their handler, Lorraine Clarke, who has since attended many Kelpies events. I think she’s as proud of them as we are. I used the horses to ‘reinterpret’ my first maquettes, drawing over the top of the original steel studies to refine the sculptures.”

Andy’s Arabesque under a full moon
Photo by Paul Ewart

It was a profound experience to be so close to the magnificent yet gentle giants. “I definitely discovered that I am puny compared to the strength of those handsome beasts,” said Andy. “You can really feel their power with just a flick of their giant heads when you have the reins in hand, and I’m sure if they’d been spooked or wanted to take off, I’d have been a goner! I know that I am not the only person who senses a connection when you look in the eyes of a horse, but I am sure they understood I was a novice and treated me accordingly. Heavy breeds have a sense of stillness, of silent strength, which I find very humbling.”

“We visit the Kelpies regularly, because our ties with the sculptures will always remain so strong,” said Hanneke. “In July we welcomed Queen Elizabeth at the Kelpies and Andy was able to talk with her about the sculptures and his affiliation with horses.”

Nothing beats seeing the Kelpies in person and Scotland’s an intriguing destination to consider if you’re planning to travel in that part of the world. Even if your plans keep you close to home, you can enjoy “The Kelpies: The Making of the World’s Largest Equine Sculptures” by Andy Scott, a coffee-table book brilliantly illustrated with photos, sketches and engineering layouts as well as sections written by various key personnel involved in bringing the gigantic horse heads to life.

Monarch — a Clydesdale — a private commission

Andy and Hanneke maintain their studio in Glasgow, where Andy is busy with an equine piece that will stand before the new campus building at the University of Edinburgh’s Veterinary School. Their main base, however, is in Philadelphia, Pennsylvania, where Andy’s working on commissions that include a sculpture destined for Mexico, a huge grizzly bear and a traditional memorial statue.

Andy at work in his studio

Hanneke has been very involved with Andy’s work even before that fateful sketching session on her kitchen table in Amsterdam. “We always talk things through, especially with the Kelpies, which have been in our household since about 2005,” she said. “Navigating an artistic idea of this scale all the way through to completion is a head rush. As an architect, I have some understanding of a project this size and I could be there for Andy to reflect his thoughts. During the process of realizing the full Kelpies sculptures, I moved from the Netherlands to Scotland, we moved house twice and got married. Life goes on and puts things into perspective. I have become a director in Andy’s company so our reflective talks continue on a more professional level.”

To relax, they walk their dog, a Hungarian vizsla (pointer-retriever) called Cobus, who needs lots of exercise and attention. Cobus travels with them and will alternate exploring the Scottish countryside with the best of Philly and its rural environs.

The Cobb in transit

As for horses continuing to play a role in Andy’s professional and personal life, you can bet on it.

“Both the Heavy Horse and the Kelpies, as well as other horse sculptures along the way, helped me to hone my skills and develop my artistic devotion to the horse as a theme in my works,” said Andy. “I’ve only ridden a horse one time, but I promise myself regularly that I must make time to learn. My job is all-encompassing and time-consuming so far, but one of these days. … ” 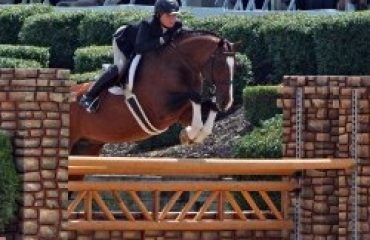 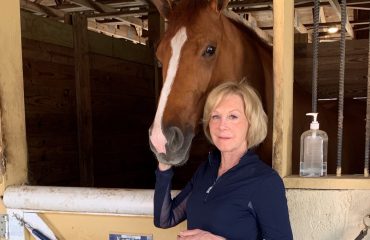 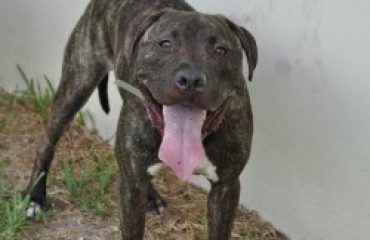