Tracy Glover of Dallas, Texas, has a new colt named  Motivation, sired by AO Breeze, Reserve National Champion Open Jumpers. Tracy reports that MoMo, who is six-weeks-old in this photo, is a jumping prospect and a great kisser. After years of being a Wall Street Corporate Headhunter, Tracy has launched a company to connect returning veterans to jobs across corporate America called www.Vets4Work.com. What a great idea!

We are thrilled to hear that no horses or people were injured in a barn fire at Legacy Stable on Two Notch Road in Aiken, South Carolina. The fire damaged several barns, destroyed offices, tack and hay rooms, but, thank goodness there were no injuries.

Holly Hugo-Vidal, who writes the “West Side Story” column for Sidelines, is now working with Joanne and Chance Arakelian at The Fairbanks Riding Club in Rancho Santa Fe, California. While helping Jo and Chance, Holly is developing a group of riders for the GSDHJA horse shows. These riders are lucky to have Holly – and so is Sidelines!

Way to go! G&C Farm has had a great summer so far with top ribbons in Europe and the United States! Carolina Mirabal and G&C Leroy won the CSI1* 1.25 m at the Global Champions Tour in Chantilly and the 1.30m Classic at the Global Champions Tour in Monte Carlo. At the Vermont Summer Festival, Mark Bluman and G&C LaGran won the $10,000 Open Welcome, presented by Manchester Designer Outlets.

The Savannah College of Art and Design has hired Eddie Federwisch as the new director of equestrian programs. Eddie joins SCAD from Virginia Intermont College where he served as director of equine studies for the past 18 years, leading his teams to victory in the IHSA Collegiate Cup in 2004, 2005 and 2007. Congratulations on your new job, Eddie!

Out in Aspen, Colorado (well actually more like the cool little town of El Jebel), Sidelines publisher Samantha Charles was spotted having way too much fun with Kathy Weiss and her two cohorts, Newton Bartley and Kody Louis Taylor. Are the martinis really that strong at Bella Mia’s? And what’s with all the connections from the past?

Sidelines interns Christina Alex, Rachel Cline and Katherine Martin have taken the Sidelines Facebook page by storm! They post original photos every day that are a huge hit with our Facebook friends. From inspirational to funny to touching, you don’t want to miss their great photos. “Like” us on Facebook and follow us on Instagram…then share their great photos on your Facebook page – you will be the envy of all your equestrian friends!!

Members of the Harvard Fox Hounds hunt club of Tulsa, Oklahoma enjoyed the club’s summer activities. There are trail rides on Saturdays in August followed by picnics with various party themes. The annual ride and picnic at the “swimming hole” was a highlight of the summer, especially for the junior members. Catch up with their pre-hunt activities at their website: www.harvardfoxhounds.com.

The Lazy E arena in Guthrie, Oklahoma was the site of the Zone 7 regional Emerging Athletes Program clinic in July. Volunteering their time was clinician Julie Winkel, USHJA representative Mary Babick and stable manager Colleen Reed. The program was sponsored by Dover Saddlery. After the riding clinics each day, participants attended lectures on stable management and other important topics. Guest lecturers included Nutrena representative Jim Ward who discussed proper equine nutrition, as well as R rated judge and experienced horsewoman, Dawn Casey. Dawn taught trailer safety which included a hands-on course in the proper way to change a trailer tire. It was an enjoyable and fun week for participants with two riders being recommended for the national competition in November.

Longwood Farm South in Ocala, Florida is continuing to grow after all these years. Once the premier training facility for eventers and the USET, Longwood has added a huge Grand Prix ring, a hunter derby field, and soon to be finished a polo field! The facility hosts all kinds of horse competitions and is a great place to visit for both you and your horse. Check out Longwood Farm South when you can, with that big of an expansion it has to be quite a site!

Ashley Fleischhacker and Sharn Wordley are getting married – which is why Ashley was spotted in New York City trying on Vera Wang wedding dresses. We can’t wait to see the beautiful bride!

The equestrian world has lost one of its most very important individuals. Dennis Dammerman, retired CFO of General Electric, passed away recently at the early age of 67. Dennis’s Sand Castle Farm sent horses to the race track with Michael Matz and supported jumpers under the guidance of Chris Kappler. A partner in Equestrian Sports Productions, Dennis was one of the first investors in the redevelopment of the equestri- an world in Wellington. His wit, charm, guidance and advice will be missed by all equestrians who knew him. 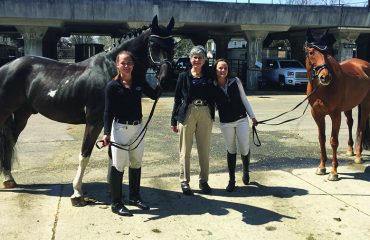 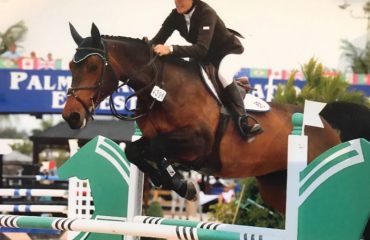 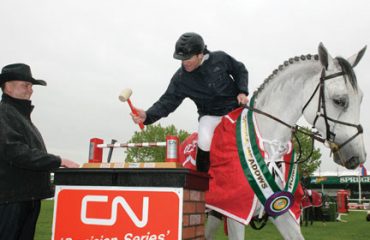