Adrienne Sternlicht knows it takes more than wishing on a star to be successful. She knows it takes hard work, dedication, strength, talent, top trainers and the right horse. Mounted on her “horse-of-a-lifetime,” Cristalline, and trained by top competitors like Linda Langmeier, Laura Kraut, Nick Skelton and currently McLain Ward, Adrienne has all that.

Adrienne’s also aware of something few have mastered, let alone by 26 years old: that thoughts can make or break even the most talented individual.

“While I believe you’ve got to have some natural feel to be successful at the highest level, I don’t think talent is the principle driver of my — or many riders’ — success,” she said. “I certainly wouldn’t think of myself as the most talented of my generation or amongst my fellow competitors, but I consider my greatest strength to be my understanding of my strengths and weaknesses and taking the time to address those areas. What I work on most in my riding is keeping my mind in the right place: it can be my greatest asset or my downfall.”

Adrienne grew up in Greenwich, Connecticut, just 30 minutes from Heritage Farm in New York. After the love of horses lodged in her heart with one pony ride, Adrienne rode with the Dignellis at Heritage and competed on ponies successfully, including in Florida a few weekends in the winter. Unlike many riders who then went on to compete in juniors and equitation, Adrienne took a break from riding completely when she went to boarding school. Her parents may have thought she would grow out of her desire to ride, but “out of sight out of mind” gave way instead to “absence makes the heart grow fonder” for Adrienne and horses.

“Growing up, it was very important to my parents that I was well-rounded,” she said. “I played other sports and participated in a variety of extracurriculars at boarding school. I always knew horses were my foremost passion and at the time was less than enthused that horses were not my focal point, but in retrospect I think it was the greatest decision for me. It fortified my love of academics but also made it increasingly clear to me when I did begin riding seriously in college that I wanted horses to be the center point in my life.”

Always of a competitive nature, Adrienne participated in varsity squash and competitive skiing in boarding school. Then, while attending Brown University, she finally returned to show jumping. “Riding was always something that came relatively naturally to me,” she said. “I wouldn’t consider myself the most gifted rider but I love to compete and with amazing ponies and training at Heritage Farm, I was able to have success at a young age. That distant memory of success fueled my ambition to see what I could accomplish when I decided to concentrate on horses after a lull in competing as a junior.”

Facing the difficult transition to international competition, she dove headlong into riding as an amateur, riding in top shows around the world and getting good results in both amateur-owner classes and grand prix. In 2016, things really began to change: she graduated with her degree in public policy, became a professional rider, began training full-time with top show jumper McLain Ward and purchased an incredibly talented horse, all setting her up for her rise to competing at the top — and to overcome the monumental trials that would come along the way.

Adrienne had been training with Linda Langmeier, whom Adrienne still turns to for help, for years when Linda had a family emergency during the Devon Horse Show in 2015. That’s when McLain stepped in. “I felt like our styles clicked right away,” Adrienne said. “We’re both very direct and serious when we’re competing.”

McLain obviously thought they clicked, too — and saw Adrienne’s potential. He took her on full-time after the Rio 2016 Olympics. “Over time our relationship has evolved immensely and he has become a very important part of my life, not just my riding career,” Adrienne said. “I believe we work well together because we have similar mentalities about the sport and I wholeheartedly believe in his program. I believe in what we’re doing every day, whether it’s on the ground or in the saddle, at home or in the show ring.”

When the pressure of competing at such a high level began to build, those nagging self-doubts came full force. Adrienne took a short break from riding to reassess and find her center through yoga and the accompanying mindfulness and self-reflection. When she got back to Wellington after a retreat, it was McLain that helped her not just to get back in the saddle but ultimately find the confidence to reach for her potential — like WEG.

“He understands me as a rider, knows when to push me and when to support me, and we’ve been through a lot together,” Adrienne said. “My journey to WEG and my experience there is a testament in many ways to the strength of our relationship — his belief in me bolsters my belief in myself, and what we can accomplish as a team.”

But even with all McLain’s help, Adrienne couldn’t make it there alone. She purchased Cristalline, an 8-year-old mare fresh from competing in the 2016 World Cup Finals with Australian Chris Chugg. “Cristalline, or Stella, is perfect in every way!” Adrienne doted. “When I first got her I was in such awe of her that I was afraid to really work her; I treated her like a precious gemstone. What she did at World Cup Finals was a combination of pure talent and incredible horsemanship on the part of Chris; At the time I got her, she was still fairly green to the four- and five-star level and so was I. In that sense, we’ve really grown up together.”

Adrienne and Stella became more seasoned jumping big glasses together over the next two years, solidifying their partnership. “Nearly every important class I jumped was with her. She’s the reason I was able to dream and then achieve far beyond what I felt was possible in many moments leading up to WEG. I have a lot more confidence in our partnership than I do in pretty much any other area of my riding!”

Adrienne’s perseverance and self-care paid off when she and Stella were named to the U.S. team for WEG in 2018, right alongside McLain, Laura Kraut and Devin Ryan. Adrienne counts it as one of her most important life experiences, but not because of the result: because of what she learned about riding, about herself and about life.

“In the speed leg, I tried to embody the sort of gritty mentality I believed had got me there — I was going to fight no matter what for the performance and result I wanted. I was trying to force way too much, and that energy translated into riding with too much pressure and aggressiveness — a sort of blind determination.”

The next day, Adrienne realized that it wasn’t her intensity that had got her there: it was every moment of preparation, including learning how to balance that intensity and staying present in the moment. “I relaxed, and gradually softened throughout the week which led to a drastically better performance. I realized I was riding the prestige of the competition, thinking something had to be different than the norm when competing at a world championship. In reality, what we do with our horses in the ring is the same regardless of the venue or competition title.”

Living in the moment paid off: for the first time in 32 years, the U.S. team took home the gold. “I don’t think there’s a single word or way to describe my experience of WEG,” Adrienne said. “The lead-up brought a whole host of excitement and anxieties that paled in comparison to my actual experience — one of enormous pressure and determination followed by a dream-like state! In retrospect the actual competition seems to have gone by so quickly — the dream of WEG largely dictated my behavior and thought patterns for months leading up to it. Now, I’m transitioning from the surreal nature of my experience and considering how I can take what I learned from it and apply it to my every day.”

Those lessons will help Adrienne as she and McLain set their sights on the 2020 Olympic Games in Tokyo — realizing that there are many variables, both in and out of her control. “If I learned anything during 2018 it was that the journey can be equally, or more, rewarding than the destination, and I’m ready to embrace that struggle the next year and a half,” she said. “McLain is a huge planner, so with that goal in mind we’ll work backwards from Tokyo and figure out what we need to do and where we need to jump. My goal is to be very consistent at a high level, and I think that will give me the best shot.”

Adrienne is working hard to keep herself on track and staying focused even when unexpected variables arise: She injured her shoulder mid-way through the winter circuit and was slated for surgery, but since the 3-month recovery would take her out of contention for the Pan-American Games she’s been going to physical therapy instead. When she’s at home in New York, she stays fit and strong with running, yoga and a personal trainer.

After this year’s winter circuit, Adrienne is excited for her horses to go home for the first time to Adrienne’s new Starlight Farm in Connecticut, fittingly named after the German word for starlight, sternlicht. That’s also where her family dog, a Golden Retriever named Indy, will stay when she’s not with Adrienne in Wellington.

Stella continues to motivate and inspire Adrienne, and the duo will return to competition this summer after Stella’s well-earned hiatus. “It wasn’t until she had a break following WEG that I truly realized how much she loves to work: she was totally wild!” Adrienne said. “I’m so enchanted with her that she makes any activity enjoyable; aside from her talent there’s something about her that is unlike any other horse I’ve been around. She has an incredible mind, which is I believe one of her greatest strengths, aside from her incredible natural ability.”

It’s a trait Adrienne seems to share. She’s passionate about education, and its potential to affect social inequality. “Our sport is a constant reminder that there’s always someone that has something you don’t, a horse that you don’t, or is in a situation that you’re not, and it’s very easy to compare yourself and get in that mindset of what other people are doing in the sport,” she explained, and finds balance in working with charities aimed at providing opportunities to those in the society who haven’t had the same advantages she’s had. “It’s a complementary value for me because it keeps me connected to the injustices of the world.”

Adrienne knows everyone has to find their own path to success, and for her, that’s being single-minded and focused on one thing at a time. For the foreseeable future, that’s horses. While she’s enjoyed bringing along her other horses, honing her skills as a rider and building her business, she’s focused on going as far as she can with Stella. 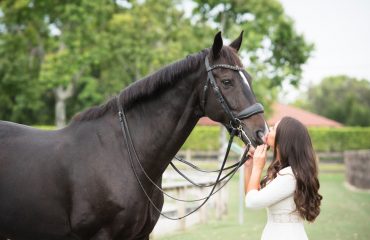 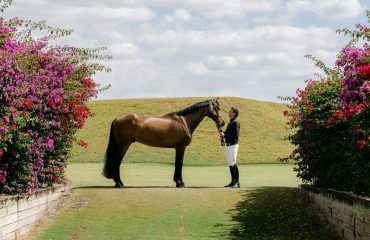 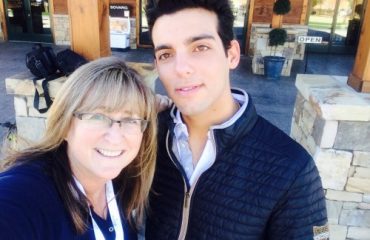