Lois Stanfield Follows Her Own Path

From the action in a polo match, to capturing the majesty of a horse to the touching and whimsical expression of a beloved family dog, Lois Stanfield creates award winning art — including her painting that graces the cover of this issue of Sidelines.

Lois Stanfield’s photography is beautiful, and her artwork from photos is stunning, but it’s done with a certain amount of risk. “I actually almost got killed the last time I photographed polo,” Lois said. “I thought I was at a pretty safe distance from the goal, and I sat down on the ground so that I could get the shot from below looking up towards them. The whole field of riders came thundering toward me and I was like a boulder in a stream; they went around me on either side and I thought, ‘This is it! I’m dead!’ But I survived it.”

Although it was a close call, Lois loves to photograph fast action horse sports like polo. She works to find the best spot to capture the rush of excitement and physicality of the moment, but from a little safer distance than being the boulder in the stream. Now, the fast-moving sport has become a pleasant break from Lois’ previous jobs of photographing riders competing at horse shows.

“The adrenaline rush of thundering hooves when you are down by the goal photographing, when they are all galloping towards you — I just loved it,” Lois said with enthusiasm. “I love the polo field with all these amazing guys on horses.”

The photo that inspired the cover painting featured on this issue of Sidelines. (Photo courtesy of Lois Stanfield)

A Change in Plans

Lois’ initial involvement in photography was quite serendipitous. After leaving college she wanted to travel and a job as an airline stewardess — as they were called then — seemed to be a perfect job for her. After breezing through the interview process, all that remained was the physical before starting her new job. “I had to take an eye exam and for some reason I couldn’t focus my eyes and I flunked the physical!” Lois said. “I have no idea why; it never happened before or since.”

Unexpectedly finding herself in Los Angeles with no job, Lois went to an employment agency and was promptly placed at the Art Center College of Design in the photography department. Lois said, “I was able to take classes at night for free, and that’s where I met my first husband, who was a photography student. Thus, I found my calling and my love in one swoop.”

After they married, Lois became his assistant and shadowed him on photo shoots to Yosemite, Telluride and many others. “I learned so much from him,” Lois recalled. “He mentored me for the rest of his life. He passed in 2007, way too young.”

When not helping her husband on photo shoots, Lois worked in graphic design, a career that she stumbled into. Her work included designing book covers and layouts for books and magazines. It became a viable career that she worked in for most of her adult life, supporting her horse ambitions in dressage and her hobby of photography. Lois realized another benefit she received from her design career when she later began her business of photographing competitors at dressage shows.

“I think working in graphic design has given me an eye for composition, color and depth. It’s a very important element,” Lois said. “It’s not enough to just take a picture. A painting or piece of art has to have the composition.”

Lois’ design training made her aware of the importance of color, ratio and balance that a typical viewer of art wouldn’t know about. “There are actually all kinds of elements that go into an image that make it have that impact, and that beauty or excitement,” said Lois.

But it was a while until she combined those skills with photography.

Lois bred her Swedish Warmblood and trained with him in dressage up through Prix St. Georges, but because of financial reasons, had to sell him and move from Minnesota to San Diego. “I missed my horse so badly in San Diego that I started going out to Del Mar Horse Park to watch the horses and riders, and then I began bringing my camera and photographing them,” Lois said. “I loved the dressage, and the jumpers! Of course, the people were curious and wanted to see the shots, and that’s how my career as an equine photographer began.”

With the combined talents of knowing good composition and being a dressage rider, Lois developed an eye for getting the shot that would show off both horse and rider. After returning to Minnesota in 2003, she began photographing several of the dressage horse shows in the upper Midwest as well as a few combined training events.

Lois points out that with the availability of good cameras now, there are many people calling themselves photographers who have no real idea of what they’re doing. She recommends that individuals wanting to be good photographers should study their craft and understand photography and how to enhance their images on the computer with the appropriate software.

Another aspect that Lois stressed was the importance of a photographer understanding their subject. Since she was also a rider, she already knew what other photographers might not be aware of: the best way to shoot a photo that would best present the dressage movements. “A good photographer needs to understand their market,” Lois said. “Each area of the horse world has its own qualities of what’s a good image — what captures the best of the horse and the rider — and you have to understand that in order to create art, whether it’s a photograph or a painting that people will like.”

“I’ve always loved the artistic things you could do with a photograph after going digital,” Lois said with enthusiasm. “It was a very natural progression for me to advance to mixed media artwork using acrylics with digital media.”

From there Lois added commissioned artwork to her business, creating paintings from photos. Completing those works of art inspired her to seek out opportunities for the express purpose of taking photos to later use for doing fine art painting.

Lois approached the organizer of the annual Twin Cities Polo Classic about photographing the action in 2011. Her interest got her on the field as one of the photographers, and she was immediately hooked. “It was like, Holy smokes, this is incredible!” Lois laughed. “I took a lot of photographs with the purpose of doing a painting, and the painting I did won an international award. Polo is probably the most exciting equine sport that I know of.”

Already a successful equine photographer and artist, Lois chose to take her career to the next level and become certified with the Professional Photographers of America in 2011. She then pursued and received a degree as a master artist in 2014. As a part of that process, and to receive her degree, she had to submit four pieces of work every year to be judged by an international panel of judges. “After judging each piece individually, they then judge the portfolios of all who submit in their respective category, and then judge the portfolios against each other,” Lois explained. “In 2012 mine was chosen as number one and I won the Canon Par Excellence Award in the artist’s category.

Lois feels that competition pushes her to do better and better and because of that, it’s helped further her career.

Painting of Trace and Chance (Photo courtesy of Lois Stanfield)

Giving Back by Teaching

Winning awards has been very encouraging for Lois and a great validation of her work, which has inspired her to want to give back, so she began teaching in 2013. Lois explained the effect of good teachers who have influenced her throughout her life, and she even continues to sharpen her own skills through workshops and online webinars. “The artwork and teaching go hand in hand. I love teaching, it helps me be a better artist, too,” Lois said. “I’ve started doing week-long workshops on equine photography and painting. It makes me happy to see somebody learn and get excited.”

Lois encourages others to have the self-confidence to make their own path and not feel like they should follow an instructor too closely. “Whatever you learn from anybody, whether it’s riding a horse or learning artistic techniques or graphic design, you have to take that and make it your own as opposed to being a clone of someone else,” Lois advises. “Learn everything you can but then let your creativity take hold. What you learn is only a foundation, like a launching pad.”

Following her own path has certainly taken Lois on a wonderful life-long adventure. “Find something that you love to do and put your whole heart into it. Learn everything you can, and never give up,” Lois tells her students. “The pursuit of excellence is a journey that will take you places you’d never dream of.” 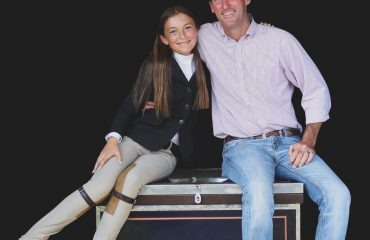 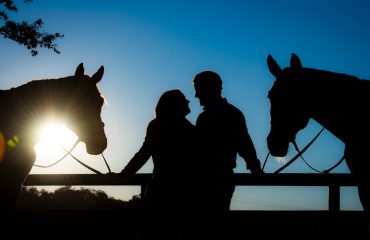 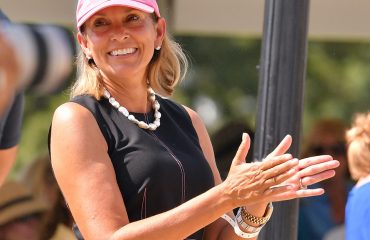