Carly Dvorkin: Focused On Her Dreams

Carly and Zelaleen in the $5000 U.S. Price Waterhouse Junior/ AO at the Rolex Central Park Invitational.
Photo by The Book LLC

Junior rider Carly Dvorkin is the youngest of four siblings and the only competitive rider of the family. She began riding at age 3 and by 5 she was competing in local shows. Carly rides for her family’s barn, Pine Hollow Farm, located in Parkland, Florida, formally called Hunters Run. When Carly and her ponies began winning in the pony divisions consistently, she made the jump to competing in the Winter Equestrian Festival in Wellington, Florida.

Carly loves competing at WEF every winter; it’s close to home and it’s also a way for her to connect better with her horses with more ring time. During the summers, they show mostly in Tryon, North Carolina, which is one of Pine Hollow’s three locations. Carly has also had great success at other shows such as The Kentucky Horse Park, The American Gold Cup and The Rolex Central Park Horse Show.

Carly surrounds herself with very positive and encouraging people. Her trainer, David Blake, said, “Carly is very intelligent, which makes teaching her very easy. She’s excellent at processing instructions given to her and applying them to her riding. I think with this quality and her hard work and determination she’ll go a long way in the sport.”

Sidelines had the opportunity to catch up with Carly and find out more about her life, her horses and her dreams.

Carly and Zelaleen competing in The American Gold Cup in North Salem, New York.
Photo by The Book LLC

Sidelines: What’s your biggest accomplishment?
Carly Dvorkin: During WEF 2015, my team riding for Communities in Schools finished fifth place in the FTI Great Charity Challenge. That meant a lot to me because it was such an amazing feeling of helping others while doing something that I love. At the Tryon International Equestrian Center, I finished as Circuit Champion of the Low Juniors for the Summer and August circuits. That was especially an amazing feeling as I’d been working so hard to move up into the Junior divisions at the beginning of summer. At the Rolex Central Park Horse Show, I finished fifth with Zelaleen. I started in the Juniors at the beginning of June, and I’m currently ranked fourth Horse of the Year for the Low Juniors with my previous horse. This summer I also became an ambassador for Connolly’s Red Mills Feed in Ireland.

Sidelines: How was your experience competing at the Rolex Central Park Horse Show?
CD: It was the experience of a lifetime. I’ve always dreamed of being able to compete at a show like the Rolex Central Park Horse Show. It was a big accomplishment to get there, as it was invitation-only to be able to compete. For a year I’d been working toward that goal. My trainer David Blake also competed a horse at the show. The horse that I competed was Zelaleen. She was the best horse I could have asked for, giving me the confidence I needed under so much pressure. That day, the time passed so fast until it finally hit me that I was riding on live stream in the middle of the Big Apple, which was always a dream when I was younger. My mare and I came in fifth place in a very competitive class, which proved to me that hard work does pay off. I couldn’t have been happier with our performance. I had such an amazing time throughout the show, accomplishing everything that was once a dream.

Carly is all smiles after winning the $5000 Low Junior/AO Classic at the Tryon International Equestrian Center.
Photo by Sharon Packer, sharonpacker.com

Sidelines: What are some of your future goals?
CD: In the next few years, my goal is to compete and finish on the podium at the North American Junior Young Rider Championships. Another goal is to compete on an American Nations Cup team. I believe that under the influence and guidance of David Blake, I can achieve my dreams of competing in the Olympics as an equestrian.

Sidelines: Tell us a little bit about your horses.
CD: My new horse, Zafira, is an 8-year-old grey Holsteiner mare who just arrived from Holland in late September. She’s very forgiving with a great mind, and although she’s new to me, I’m in love with everything about her. I’m very thankful to have been given a horse like her.

Alejandro is a 10-year-old bay Holsteiner gelding imported from England. He’s a great teacher that has built my confidence moving up the levels. He’s a very sweet boy and has loads of personality to him.

I sold Zelaleen after the Central Park Horse Show. She was the most amazing first junior jumper I could have ever asked for. Zelaleen is an 11-year-old chestnut mare who was imported from England in late December 2014. She was the sweetest mare with the sweetest heart. Zelaleen, along with Alejandro, took me from just coming out of the Low Children’s to the Children’s during the first weeks of WEF to the Modified Children’s, and then to the Low Junior Jumpers in no more than three months.

Sidelines: When showing, how do you juggle horses and school?
CD: I’m a freshman at the North Broward Preparatory School in Coconut Creek, Florida. I’ve been attending since I was 3 years old and this is my 12th year attending. I have many friends that I’ve grown up with through the years and have made many new ones. This year I was elected to be the homecoming “Lady” of my class, which was a great honor. School is very important to me, along with all of my friends. My school is very flexible; they’ve always worked with me, especially if I’m out for competitions. I’ve always been a hardworking and dedicated student. At the same time, it’s very challenging to balance school and horses. Sometimes it feels like I’m living in two different worlds at the same time. I have many riding friends whom I’ve met over the years and who I wait to see all year round until the start of season. During the season, I get to spend a good portion of my time with my friends even when waiting at the ring for our class to start. It’s also the hardest time for me to focus on being successful in school with so many things going on at once. Although it may be challenging to balance both horses and school, it’s like getting the best of both worlds.

Carly and Zelaleen — 5th place in the Rolex Central Park Invitational.
Photo by The Book LLC

Sidelines: Who are your equestrian idols?
CD: I’ve always looked up to my trainer David Blake. He’s taught me everything I know about the jumpers and has inspired me to be a better equestrian through his hard work and dedication to the horses. He’s always believed in me and continues to set me up on the path to learn and grow as a rider. In these last two years of my transition into the jumper ring, I would’ve never imagined to accomplish and experience the things I have. I owe it mainly to David for always pushing me to do my best and for making me strive further to reach a certain goal by hard work. He’s been my trainer for almost four years and I couldn’t imagine where I’d be today without him. I also look up to Amanda Derbyshire as rider as she’s very focused and she’s been a big part of the team supporting me and even just being at the ring for me.

Sidelines: What’s your favorite quote and do you have any advice for those chasing the dream of the jumper ring?
CD: Jim Hickey, a sports psychologist based in Ireland, said, “Stay focused on what you want, and follow your dreams.” In this sport I’ve learned it’s best to stay humble. I’m always thankful and never forget the people who’ve helped me reach this point in my riding career, such as my previous trainers. In this sport, it’s very important to stay focused on yourself and do whatever makes you happy instead of worrying about others. Don’t be afraid to go out of your comfort zone and don’t be afraid to take risks. One of the worst things riders do is overthink things in and out of the show ring. One thing I’ve learned riding many different horses is to let things happen and flow. Things don’t always work out the way we want them to. Instead of getting upset, think of what you need to do or what you can do to change or make something better. It’s also better in most cases not to rush into things but instead be patient and take your time because you’re going to get further in the long run.

About the writer: Jona Lane is an at-home mother of three beautiful children and married to an amazing husband. She has ridden since she was a child, being the daughter of a horse-trainer father and horse-loving mother. Her family rode mainly Western, but Jona always dreamed of the jumper ring. She continues to fit horses into her busy schedule of being a mom and enjoys writing about her passion. 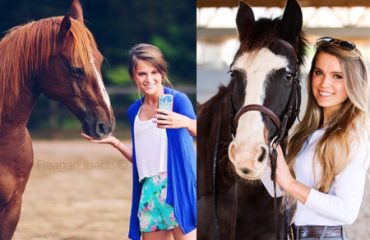 Discovering the Joy with Madison and Reagan Ibach 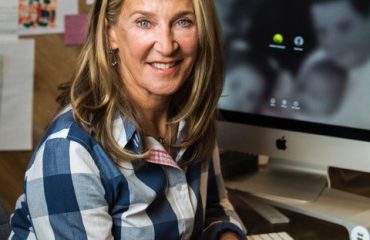 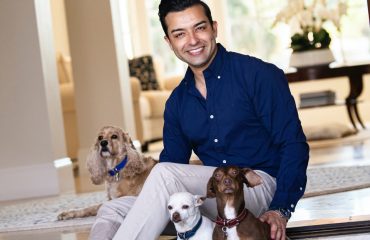