Ryan Wood: The Eventer From Down Under – The Australian Rider Shares Stories About Poisonous Snakes, Mental Toughness and Training with Mentor Phillip Dutton

Ryan Wood grew up riding and eventing in his homeland of Australia. His first horse, an Australian stock horse/Thoroughbred cross named Countdown, was also his teacher. Countdown gave Ryan great confidence on the cross-country, no matter how big or how daunting, and also took Ryan from Pony Club to his first four-star at Adelaide when they were both 19.

After high school, Ryan traveled around his country and to Europe to learn from top horsemen. When he decided to try eventing in the U.S., two things happened that profoundly influenced his life. One was the shattering disappointment of having to withdraw his horse right before the start of dressage at the 2007 Kentucky Rolex Three-Day Event. Koyuna Azgard was fine after some rest, but the young equestrian learned not to let all his hopes ride on one horse.

“That was really tough to swallow, coming all the way from Australia with my horse and not being able to compete,” said Ryan. “It gave me a lot of fire to make sure that I got back to Rolex, which happened nine years later. On the way home [in 2007], I said to myself that I needed to work out a way to get back on top with more than one horse and that is the base of how I started to build the string of horses I have today.”

The other was staying with his horse at Phillip and Evie Dutton’s True Prospect Farm in the weeks leading up to Rolex. Ryan returned to the U.S. in 2008 and, as fate would have it, ended up working for Phillip and living at True Prospect. “Phillip has been and continues to be my greatest mentor and teacher,” said Ryan. “The man is a brilliant trainer, rider and planner. I have submerged myself in the system he has and have been based at his farm for nine years. He taught me to keep improving myself, to work hard and never stop trying.”

Like Phillip and longtime friend Boyd Martin, Ryan’s proving to be another of Australia’s amazing “Iron Men” of eventing.

Growing up Down Under

Riding was a family activity for Ryan, his older sister and their parents. “We would go away on riding holidays to big cattle or sheep stations [ranches] and take our horses there,” said Ryan. “We would go with the Dural Pony Club — it was an annual thing to take your horses and go and experience what it was like to ride on the land among the cattle and sheep. You’re riding ponies through rivers and streams, up and down mountains, across valleys. It was a great time. The things you would come across — snakes, kangaroos — you learned a lot of stickability chasing cows and being out there, steering your horse in the direction you had to go quickly, opening and closing gates. I have great memories.”

Ryan focusing during the dressage phase at Rolex.

During one of these Pony Club experiences, Ryan had a close encounter with one of Australia’s venomous snakes. “The King Brown can grow to 10 feet long and they’re very aggressive,” he said. “A lot of the venomous snakes, if they’re disturbed, will try to get out of your way, but the King Brown actually chases you. We were going through a gate and woke up the King Brown that was sleeping in the rotted center of the gatepost. As we shut the gate, it came out, rearing its head, and we took off. Luckily, I was on a horse, not on foot, because it came after us.”

It reinforced why every Australian kid learns to turn their boots upside down and tap them against the wall before putting them on. “It’s a common thing for a snake or deadly spider to end up in your boots,” Ryan said. “It’s probably more the fact that if that did happen, it was catastrophic and you wanted to avoid that. I still check my boots out of habit.”

Taking part in the Wellington Showcase in Wellington, Florida.

After his four-star debut with Countdown, Ryan brought several horses up through the levels, earning good places at Adelaide and the top three-stars in Australia. He moved himself and Woodstock Eventing to the U.S. in 2008, where he worked for Bruce Davidson before spending four years working for Phillip. For the last five years, Ryan has run his training and sales business out of True Prospect Farm, building his reputation as a coach and for being skilled with developing green and challenging horses.

Ryan credits all his teachers, including his dressage trainer, Silva Martin, for contributing to his knowledge. However, it’s Phillip, himself a quintessential horseman, who continues to teach his protégé everything he knows.

“Phillip’s very systematic. He’s very matter-of-fact in what he does and how he teaches,” said Ryan. “Before I really got into teaching, I had to get the experience and the knowledge and put it into practice first. Then I was able to interpret what I’d learned and voice it to my students. I have learned a lot about running a horse business from Phillip. He’s been an amazing influence.”

Ryan, who just turned 34, has been harvesting great results with the string of horses he’s been developing for years that now compete from Training to Advanced. Last June, at the Jaguar Land Rover Bromont CCI (Quebéc, Canada), Ryan won both three-stars — the CCI*** with Woodstock Bennett and CIC*** with Frankie. At the American Eventing Championships (AEC) last August, Ryan was Advanced champion with Powell, winner of the CCI*** at Jersey Fresh in May, and Advanced reserve champion with Woodstock Bennett, and placed two more — Fernhill Classic and McLovin — in the top 20 of the same division.

“Winning those major events was huge for me and my confidence competing — it was something I have been striving for since I won my first one-star back in 1998,” said Ryan. “To win my first three-star with Powell at Jersey Fresh [May 2016], then a few weeks later win both three-stars at Bromont was the best feeling and highlight of my career.”

Ryan gallops through the water at a Sporting Days Farm event.

In March, Equestrian Australia’s National Squads included Ryan and three of his horses: Woodstock Bennett, Powell and Fernhill Classic (aka Classic), who’s entered for Kentucky Rolex CCI****. The long-term plan, if all goes well and Lady Luck smiles, includes having a fair shot at making the team for the World Equestrian Games in 2018 and the Olympics in 2020.

“Classic’s an interesting horse — great to handle on the ground, a bit of a handful when you get on his back,” said Ryan. “His strongest phase is the cross-country, probably because that’s my strength. He’s had more clear show-jumping rounds at Advanced in the last year than not, so that’s more consistent. The dressage — he’s very talented, but keeping his composure for seven minutes can be challenging. He’s got a lot of spirit. He’s a very tough-minded horse and a tough horse — he just keeps on going. I think he’s the scopiest horse I’ve ever jumped. He gets better every year.”

“It’s great to be in the top 50 in the world although I don’t get too wrapped up in the rankings,” said Ryan. “In Australia, you work hard and keep plugging away. At the end of the day, hard work will triumph. It all comes back to the skills I’ve developed, working alongside Phillip every day. The nitty-gritty stuff, the attention to detail, the pursuit of excellence when you’re riding in the indoor or out in the jump ring, knowing that there’s a pair of eyes watching you, not missing a thing, and also seeing how it’s done is something you can’t put a price on.”

All photos by Cindy Lawlor 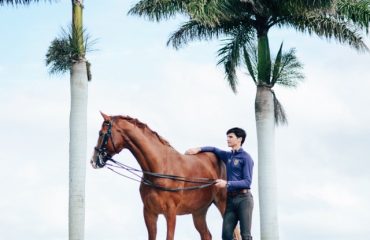 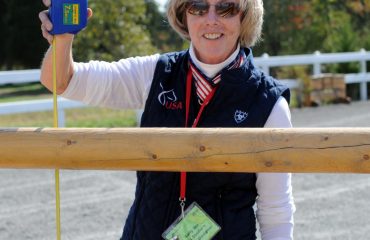