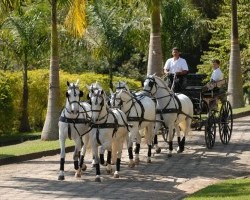 Tuesday, June 04 2013 by Editor
Itapira, Brazil (May 31, 2013) – ‘You only live once,’ or YOLO, defines a decade that doesn’t just dream about doing what they love, they go for it. So if your personal pursuit of paradise includes the exhilarating connection to a noble horse or pair put to a fine carriage then Destination Lusitano is about as close to heaven as a combined driving enthusiast can ask for
Tagged under: brazilian, drive, education, horses, in the irons, lusitanos, olympic sidelines, yolo 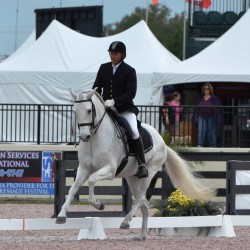 Saturday, May 11 2013 by Editor
Wellington, FL (May 6, 2013) – Two talented Lusitanos represented the breed and brought the flair of the Portuguese to the dressage arena during the 2013 Adequan Global Dressage Festival, where the top dressage horses in the nation compete during the winter season. Balder, ridden by owner Lesley Maxwell, and Versatil Imagem, ridden by Matt McLaughlin, were awarded the High Score Lusitano Award for performances at the GDF 5* CDI and WEF Dressage Classic CDI-3*
Tagged under: chasin', festival, in the irons, interagro lusitanos, lusitanos, matt mclaughlin, tucker the wunderkind, versatil imagem, wef dressage classic