Friday, March 31 2017 by Editor
Princeton Show Jumping in Princeton, NJ is introducing a new USEF American Standard Grand Prix Series and an $18,000 National Rider Bonus! This 11 Grand Prix Series will lead the new Princeton Equestrian League at the state-of the-art Princeton show grounds, April 23, 2017 through the Final, October 15, 2017. There has been an unprecedented growth of International/FEI showing in the U.S. This is fantastic for our well-supported and successful International U.S Team level Riders. These Riders often fly all over the world to compete for historically high prize money.
Tagged under: competed-at-fei, final, international, national, national-riders, princeton-show, princeton-show-jumping, series 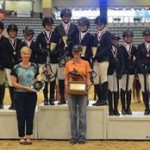 Friday, August 09 2013 by Editor
Lexington, KY -Clear rounds were the order of the day in the Alltech Arena on Thursday evening as 11 teams went to task over Marc Donovan’s 12-obstacle track. Team medals in the US National Pony Jumper Championship were at stake as competition was held in the two-round Nations Cup format.
Tagged under: 2013 us pony finals, collecting, education, faultless, individual, national, national-pony, pony tales

Saturday, July 27 2013 by Editor
Wayne, IL – July 26, 2013 - It was a day to remember for Molly Mcadow as she laid down the winning rounds during the $5,000 USHJA National Hunter Derby. The Lamplight Equestrian Center was packed with exhibitors and spectators for the third day of Equifest I, and although the skies were gray and torrents of rain poured down from above, the derby contenders were not deterred.
Tagged under: archives, between the ears, beyond the track, education, green, in the irons, indianapolis, national, national-hunter, pony tales, sidelines-magazine, tails & trails

Friday, November 11 2011 by Website Editor
Catching up:  We love superstars, and you don’t get much more super than Totilas, soooo if you haven’t seen him, now’s your chance!  We are told that this spectacular animal will make a onetime US appearance competing in The World Dressage Masters at the Jim Brandon Center. The show will be produced by Wellington Classic
Tagged under: championship, cheetham, dressage, henrieta, national