When Chase Shipka was a teen, she would’ve laughed if you told her she’d one day be living in Wellington, Florida, pursuing “just dressage.” Formerly a gung-ho eventer, Chase saw dressage as the phase before the fun stuff began. Today, dressage is the fun stuff. In 2021, Chase and her mount, Gladstone Zee T, won the Brentina Cup for the U25 Grand Prix. This year, she is embarking on a brand-new journey into the senior ranks, chasing down her dream of someday becoming part of Team USA.

The horse bug runs in Chase’s family—her mother and aunt grew up eventing, so it only made sense for Chase to follow in their footsteps. Born just outside of Chicago, Chase was set atop a pony for the first time as a young child. “My mom wanted to see if I liked it or not, and of course I did. It was probably a big mistake, now that I look back at it!” Chase said.

After several years of lessons at a hunter-jumper barn, Chase moved with her family to Jackson Hole, Wyoming. Without a lesson program to join, Chase dabbled in Western, riding Quarter Horses and trail riding. “That’s where my passion for horses was established, even though it wasn’t very structured!” she said. Eventually, her family found a barn with other kids for Chase to join. “I got involved in Pony Club. I first showed in what they called ‘Grasshopper’ eventing, and worked my way up. Even though I didn’t go very high into the Pony Club levels, learning about sportsmanship and proper care was extremely helpful.”

As a freshman in high school, Chase moved once again, this time to Middleburg, Virginia. With her gelding Toddy, known as Victory Shetan, Chase climbed up the levels and qualified for the North American Youth Championships as a Junior for Area II at the Kentucky Horse Park in 2013. Though she didn’t place individually, Chase came home with a team bronze and an inspiring first experience being part of a team.

Sticking to the Sandbox

Unfortunately, Chase’s eventing success came to an abrupt end during her senior year of high school. “I had a pretty bad rotational fall. I wasn’t too badly hurt, but it scared me. I lost my nerve a bit,” Chase explained. “I actually stopped riding completely after high school.”

Chase took a gap year to travel before looking at colleges, but upon returning home, she discovered a new passion—a renewed interest that would change her plans entirely. “My mom had started doing dressage, and I started to ride a little bit again with Toddy,” she said. “I took him to Prix St. Georges and we competed in the Young Riders division, though we didn’t make the team—my scores were not so hot—but by the end of the year, I’d decided I wanted to go to Wellington to pursue dressage full time.”

Along with Toddy, Chase brought her new horse, Zigal, to Wellington to embark on her new journey. “We worked with Robert Dover during my first year. I tried for Young Riders with Zigal, and we qualified for the Region 1 Team. I wasn’t expecting to win because I’d only done the sport for a year—but we ended up second individually and won gold in the freestyle,” Chase said. “Zigal is a saint; he taught me pretty much everything I know, and he was the easiest horse to ride!”

With Toddy approaching his 20s, Chase decided to send him back to Virginia, start looking for another partner and begin training with Oded Shimoni. Chase found Glenn, Gladstone Zee T, a KWPN gelding who had previously shown in developing-horse classes in Sweden. “Oded and I decided it would be a good experience for me to go over to Europe,” Chase said. “I made arrangements with Jan Brink, who’d helped me find Glenn, to go train and compete in Sweden.”

Because of a visa issue, Chase had an extended stay, spending six months across the pond in intensive training. “Jan is an absolutely fantastic coach and person. He took me under his wing and taught me about developing horses and riding the Grand Prix,” Chase said. “We showed in the Small Tour, and showing in Sweden is very similar to Wellington!”

Upon returning home, Chase was offered the opportunity to work with USA Dressage Development Coach Charlotte Bredahl. “Charlotte has been a godsend, and she has held my hand every step of the way into the Developing Grand Prix,” Chase said. Together, Chase and Glenn were poised to top the scoreboard at the 2020 Festival of Champions, but between COVID-19 and Charlotte’s recovery from brain surgery, Chase chose to stay home.

With just one year left to qualify for the U25 Grand Prix, Chase shifted her sights from the Developing Grand Prix to the Brentina Cup. “I thought it wouldn’t be a big jump between the tests, but we were both still learning. The sport was still relatively new to me compared to others in my division,” Chase explained. “We decided to give it a go, and we qualified!”

Though Chase felt inexperienced, the judges thought otherwise. Chase and Glenn finished each class with the top score. Finishing with an overall total of 70.114%, Chase and Glenn took the victory lap wearing the famed blue cooler. “We won every single class, and ended up being Brentina Cup Champions!” Chase said.

“It was a perfect weekend. My whole family came up to watch—including my 90-year-old grandparents! To have been with Glenn for so long and to learn everything together was so special,” she said. “I just wanted to do well, for myself and for my family, and of course Glenn. To walk away champions was just unbelievable.”

With her U25 chapter coming to a close, Chase is looking ahead to the future, joining the ranks in the senior division. In December, Chase took Glenn to their first senior Grand Prix, earning a 69% and a promising glimpse into the future. “He was extremely focused and mature,” she said. “We had little mistakes here and there, but he gave me 100%.”

For now, Chase is just along for the ride as Glenn gains confidence. “I’m not putting too much pressure on myself or my horse,” she said, “but I’d like to get over to Europe this summer, COVID dependent of course.” If Europe is not an option, she plans to qualify for the Festival of Champions in the senior Grand Prix division.

Though she hasn’t branched out into coaching others, Chase believes it’s something she would enjoy down the road after achieving her personal goals, though she doesn’t see herself moving out of Wellington. “I’ve been in Wellington for six years now,” Chase said. “I’ve made so many connections. It’s a centralized hub for equestrian sports; there’s a show every single weekend. There’s no place like it, and I’m so proud to call this place home.”

As Chase embarks on her new journey into the senior ranks, she frequently looks back to remember how far she has come. “Never in a million years would I have thought I’d be doing pure dressage. When I was younger, dressage was the worst. I jumped headfirst into it and I’ve been pleasantly surprised. I’m honored by all of the people I’ve been able to work with in such a short amount of time, and all of the friends I have made,” she said. “I thought I’d be here for one season, give dressage a try and go back home—but this is my home now, and dressage is my life!” 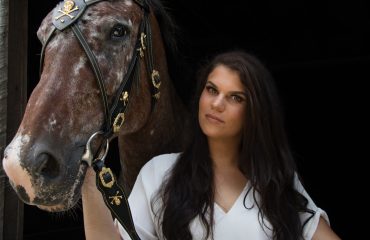 Knabstruppers Show Off Their Spots at Murder Hollow 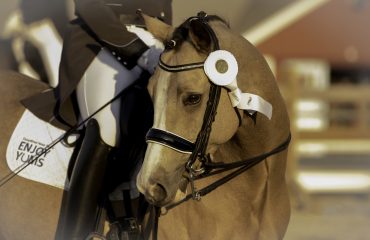 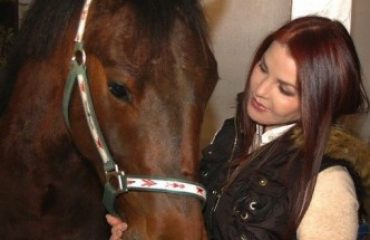